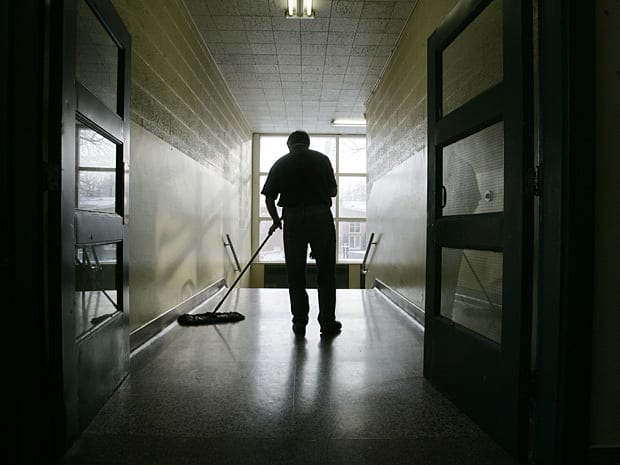 This is a piece of mine from 15 years ago. Sadly, nothing really has changed since then regarding we ' working stiffs'. It was written to appear during the Xmas season.


My friend Nick from Chicago told me this story.  Early one AM, years ago, he was driving with his dad, a Chicago cop, through a rather rundown neighborhood.  Passing a bus stop bench young Nick observed a man in worn clothes sitting with lunch box in tow.  My friend acknowledges his comments were not particularly kind about the bus stop bench man.  His father, the cop, overruled him.  “That guy is what we call a hero.  Ya wanna know why he’s a hero?  Cause he gets up this early each day and takes a bus to a job.  And he works for his living - that’s why!”

Even on Christmas morning, it  seems as though all the world will be opening gifts and sharing warm holiday cheer.  Kenny Hamilton, 31, will be doing what he does every morning:  mopping floors and emptying trash.  Before the break of dawn each day, Christmas included, Hamilton leaves the Daytona Beach house he shares with his mother and heads for Port Orange.  By 6:00 am he’s working as housekeeper and floor cleaner at the Mariner Nursing Home.

Hamilton performs these duties seven days a week, including most holidays.  At noon he leaves the Mariner for a brief respite.  By 3:30 pm, 5 days each week, he’ll be doing housekeeping for the Atlantic Medical Center.  At 11:30, his workday finally over, Hamilton will head home, ready to resume this pace a short 5-6 hours later. Why?  “I love to work, been doing these hours since I was 18.  It's just my mom & I at the house and she works long hours as a nurse's aide.  When you don’t pull in the big bucks you put in the hours. I don’t mind.”

Mrs. Betty Hamilton, Kenny’s mother, is somewhat concerned about her son.  “I always tell him he works too hard.  He just says  he loves to work and be around people.   He visits his 89 year old grandmother a few blocks from here all the time.  Believe it or not, Kenny finds the time to help her as well.”

Hamilton averages around $6.50 an hour for the 79 ½ hours he works. Compared to the high tech salaries many of his contemporaries earn, that’s not much at all.  Yet, he maintains an extraordinarily positive attitude.  Add that to the fact that Hamilton does much more than just cleaning.  Brad Robbins, maintenance director of Mariner put is succinctly:  “Kenny is just a conscientious hardworking man who cares deeply about our residents”.  Just ask Danielle Dear (57) a resident for four years.  “Kenny always does above and beyond his duties.  If someone is feeling upset he’ll go right over to them and talk to them - calm them down.  If someone cannot walk properly through the hallway, he’s always there to help.”

Hamilton has a four year old daughter, Katlin, from a prior marriage.  She lives in Jacksonville with her mother.  “I usually see her 4 to 5 times a year, but I call her at least once a week.”

Wherever he works, Hamilton gets high praise.  Bob MacCollister, his supervisor at Atlantic Medical thinks highly of him.  “For five years he’s been dependable and a very good worker”.  Barbara Tighe, housekeeping supervisor at Mariner, makes another observation.  “In the two plus years he has been with us, maybe, just maybe, Kenny has missed four days of work.  That in itself says a great deal about him.”

That Chicago cop, years ago had perhaps the best handle on things.  Men like Kenny Hamilton, they are the real heroes who walk amongst us.  They work hard for wages lower than they deserve, and they do the job, and then some.  When our parents, grandparents, aunts or uncles sooner or later need that constant care, it's the Kenny Hamiltons who tend to their “accidents” and keep their now smaller world a little cleaner, a little neater.  All with dignity, all with respect.  This all magnifies the fact that there is something inherently wrong with our economic system.  When someone has to work 79 ½ hours to earn $516 (before taxes), performing a task that most of us would never do, it must be addressed.  What could be more important for the health and well-being of our loved ones than having conscientious and caring person “clean up” after them?  They should be compensated in a more generous manner. Unfortunately, as we ll know only too well, capitalism has never understood (nor cared for) the meaning of the word justice. Perhaps the most beautiful word of all.

ALERT: Seems like the Empire is planning a false flag on Venezuelan border