The Empire: Now or Never

American imperialism has always been brutal but it has learned to hide its hideousness behind an elaborate facade of totalitarian propaganda.

Many people I talk to seem to think American foreign policy has something to do with democracy, human rights, national security, or maybe terrorism or freedom, or niceness, or something. It is a curious belief, Washington being interested in all of them. Other people are simply puzzled, seeing no pattern in America’s international behavior. Really, the explanation is simple.

The reason of course is empire, the desire for which is an ancient and innate part of mankind’s cerebral package. Parthian, Roman, Aztec, Hapsburg, British. It never stops.

When the Soviet Empire collapsed, America appeared poised to establish the first truly world empire. The developed countries were American vassals in effect if not in name, many of them occupied by American troops: Among others, Europe, Canada, Japan, South Korea, Latin America, Saudi Arabia, and Australia. The US had by far the dominant economy and the biggest military, controlled the IMF, NATO, the dollar, SWIFT, and enjoyed technological superiority.. Russia was in chaos, China a distant smudge on the horizon.

Powerful groups in Washington, such as PNAC, began angling toward aggrandizement, but the real lunge came with the attack on Iraq. Current foreign policy openly focuses on dominating the planet. The astonishing thing is that some people don’t notice.

The world runs on oil. Controlling the supply conveys almost absolute power over those countries that do not have their own. (For example, the Japanese would soon be eating each other if their oil were cut off.) Saudi Arabia is an American protectorate,and, having seen what happened to Iraq, knows that it can be conquered in short order if it gets out of line. The U. S. Navy could easily block tanker traffic from Hormuz to any or all countries. 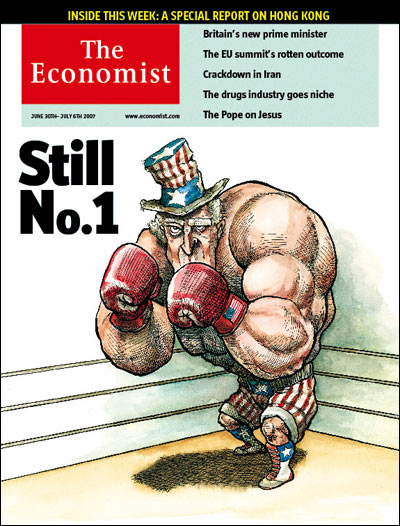 A major purpose of the destruction of Iraq was to get control of its oil and put American forces on the border of Iran, another oil power. The current attempt to starve the Iranians aims at installing a American puppet government. The ongoing coup in Venezuela seeks control of another vast oil reserve. It will also serve to intimidate the rest of Latin America by showing what can happen to any country that defies Washington. Why are American troops in Nigeria? Guess what Nigeria has.

Note that Iraq and Iran, in addition to their oil, are geostrategically vital to a world empire. Further, the immensely powerful Jewish presence in the US supports the Mid-East wars for its own purposes. So, of course, does the arms industry. All God’s chillun love the Empire.

For the Greater Empire to prevail, Russia and China, the latter a surprise contender, must be neutralized. Thus the campaign to crush Russia by economic sanctions. At the same time Washington pushes NATO, its sepoy militia, ever eastward, wants to station US forces in Poland, plans a Space Command whose only purpose is to intimidate or bankrupt Russia, drops out of the INF Treaty for the same reasons, and seeks to prevent commercial relations between Russia and the European vassals (e.g., Nordstream II).

China of course is the key obstacle to expanding the Empire. Ergo the trade war. America has to stop China’s economic and technological progress, and stop it now, as it will not get another chance.

The present moment is an Imperial crunch point. America cannot compete with China commercially or, increasingly, in technology. Washington knows it. Beijing’s advantages are too great: A huge and growing domestic market, a far larger population of very bright people, a for-profit economy that allows heavy investment both internally and abroad, a stable government that can plan well into the future.

America? It’s power is more fragile than it may seem. The United States once dominated economically by making better products at better prices, ran a large trade surplus, and barely had competitors. Today it has deindustrialized, runs a trade deficit with almost everybody, carries an astronomical and uncontrolled national debt, and makes few things that the world can’t get elsewhere, often at lower cost.

Increasingly America’s commercial power is as a consumer, not a producer. Washington tells other countries, “If you don’t do as we say, we won’t buy your stuff.” The indispensable country is an indispensable market. With few and diminishing (though important) exceptions, if it stopped selling things to China, China would barely notice, but if it stopped buying, the Chinese economy would wither. Tariffs, note, are just a way of not buying China’s stuff.

Since the profligate American market is vital to other countries, they often do as ordered. But Asian markets grow. So do Asian industries.

As America’s competitiveness declines, Washington resorts to strong-arm tactics. It has no choice. A prime example is the 5G internet, a Very Big Deal, in which Huawei holds the lead. Unable to provide a better product at a better price, Washington forbids the vassals to deal with Huawei–on pain of not buying their stuff. In what appears to be desperation, the Exceptional Nation has actually made a servile Canada arrest the daughter of Huawei’s founder.

The tide runs against the Empire. A couple of decades ago, the idea that China could compete technologically with America would have seemed preposterous. Today China advances at startling speed. It is neck and neck with the US in supercomputers, launches moonlanders, leads in 5G internet, does leading work in genetics, designs world-class chipsets (e.g., the Kirin 980 and 920) and smartphones. Another decade or two of this and America will be at the trailing edge.

The American decline is largely self-inflicted. The US chooses its government by popularity contests among provincial lawyers rather than by competence. American education deteriorates under assault by social-justice faddists. Washington spends on the military instead of infrastructure and the economy. It is politically chaotic, its policies changing with every new administration.

The first rule of empire is, “Don’t let your enemies unite.” Instead, Washington has pushed Russia, China, and Iran into a coalition against the Empire. It might have been brighter to have integrated Iran tightly into the Euro-American econosphere, but Israel would not have let America do this. The same approach would have worked with Russia, racially closer to Europe than China and acutely aware of having vast empty Siberia bordering an overpopulated China. By imposing sanctions of adversaries and allies alike, Washington promotes dedollarization and recognition that America is not an ally but a master.

It is now or never. If America’s great but declining power does not subjugate the rest of the world quickly, the rising powers of Asia will swamp it. Even India grows. Either sanctions subdue the world, or Washington starts a world war. Or America becomes just another country.

To paraphrase a great political thinker, “It’s the Empire, Stupid.”

Fred, a keyboard mercenary with a disorganized past, has worked on staff for Army Times, The Washingtonian, Soldier of Fortune, Federal Computer Week, and The Washington Times. He has been published in Playboy, Soldier of Fortune, The Wall Street Journal, The Washington Post, Harper’s, National Review, Signal, Air&Space, and suchlike. He has worked as a police writer, technology editor, military specialist, and authority on mercenary soldiers. He is by all accounts as looney as a tune. I was born in 1945 in Crumpler, West Virginia, a coal camp near Bluefield. My father was a mathematician then serving in the Pacific aboard the destroyer USS Franks, which he described as a wallowing and bovine antique with absolutely no women aboard, but the best the Navy had at the time. Fred Reed's website is at https://fredoneverything.org/ .