Home IRAN With an Eye on Regime Change in Iran, the US Escalates Tensions

With an Eye on Regime Change in Iran, the US Escalates Tensions 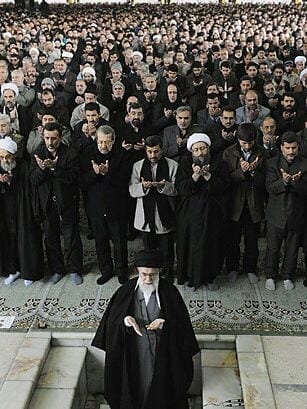 Sayyid Ali Hosseini Khamenei is a marja and the second and current Supreme Leader of Iran, in office since 1989. Iran's leaders are not afraid of US power, and Iran will not submit to coarse provocations.

On last Wednesday, the US slammed fresh sanctions on Iran’s mining industry to apparently push Iran’s economy into an even deeper recession, hoping for this situation to erupt into a large-scale labour discontentment, which might become, as many in Washington hope, a pivotal point leading to an overthrow of the Iranian regime. For example, one of the areas targeted is the production/export of iron ore. In 2018, Iran exported 14m tonnes of ore. Iran’s export in this sector were expected to increase to 20m in 2019, but the US sanctions are likely to bring this export significantly down.

Another sector targeted is mineral production and export. Iran has about 37 billion tonnes of proven mineral reserves and 57 billion tonnes of potential reserves, worth 800 billion dollars. Iran exported over 57 million tonnes of mineral products worth more than 9.2 billion dollars during the fiscal year to March. But new US sanctions are likely to adversely affect exports in this sector also.Low export means low production, which means all sorts of problems with regards to the labour and the factories. With factories not working/shutting down and the labourer not able to earn their wages, a labour unrest can take place and spread across the country, causing a massive political crisis and/or an uprising against the Iranian regime. This is the essence of US policies vis-à-vis Iran: regime change. The US withdrawal from the Iran nuke-deal; imposition of sanctions and declaration of the revolutionary guards as a ‘terrorist force’ have all produced conditions for yet another military conflict in the Middle East.A US exit from the deal and EU countries’ non-compliance to helping Iranian economy regain plus a lacklustre response to the US unilateralism has all led to Iran giving the EU a 60-day ultimatum for abiding by the deal or Iran will no longer be obliged to follow the deal and its obligations. On last Wednesday, frustrated by the EU’s lacklustre policy, Iran announced that if the remaining signatories fail to provide Iran with the merits stated under the deal in the next 60 days, Tehran will stop complying with its nuclear undertakings in consequent phases. For a start, Rouhani also announced, Iran will cease to observe the capping on the volume of enriched uranium and heavy water reserves that it is permitted to hold. After 60 days, if Iran’s grievances are not still addressed, it will no longer observe the restrictions on the 3.6 percent level of uranium enrichment and will resume work on its heavy water reactor at Arak.

The EU countries have rejected Iran’s ultimatum. At the same time, they have as usual expressed a disapproval of the US unilateral policy vis-à-vis Iran. But Iran as well as its two close allies, Russia and China, seem to understand that nuclear deal has never been the real issue; the real issue is Iran’s revolutionary regime and a US (as also a Saudi, Israeli and UAE) policy to overthrow it, preferably through an internal up-rising.

This way, the US and its allies can avoid confronting Russia and China on Iran. A military attack would otherwise cause an escalation on a very large scale.

That the reason for a US exit from the deal and imposition of sanctions is their regime change policy is evident from Iran’s emphasis on how the so-called ‘B-team’ involved in all this. This team, according to Iran’s foreign minister Zarif, consists of Israel’s Bibi (Netanyahu), Saudia’s MBS, UAE’s MBZ, the US’ John Bolton. Also, the fact that IAEA, the CIA, EU and Russia and China continue to stress that Iran has done no violations of the deal adds further substance to the idea of the Trump administration following its notorious ‘regime change’ policy vis-à-vis Iran.

But the Iranian response is not provocative or even threatening. It is legally within JCPOA’s terms and conditions and is legitimate. If Iran is blaming the EU for its failure to abide by the deal, it has every reason to say so. Ever since the US exit and imposition of sanctions, Iran’s oil exports have been falling. Today Iran’s oil exports are 2.5 million less barrels per day, falling to half of what it used to export prior to the US withdrawal.

This has certainly created a precarious condition for Iran. For now, Iran is moving within the framework of the deal and is closely coordinating with Russia on the matter. Before making last Wednesday’s announcement, Iran’s foreign minister was in Moscow. Therefore, Iran’s ultimatum is nothing but a move closely coordinated with Russia. Unsurprisingly, Russia has endorsed it. The Kremlin spokesman Dmitry Peskov blamed Washington’s “ill-conceived subjective decisions” subjecting Iran to “unjustified pressure” and triggering the current face-off.

On a broader scale, Iran’s close coordination with Russia and its ultimatum to EU shows that Iran’s policy is to force the international community to put pressure on the US to restore the status quo that was achieved in 2015. This shows how Iran is not moving towards an actual military escalation with the US However, if push comes to shove, it will be disastrous not only for both countries but also for the whole region. The US does understand that Iran isn’t Iraq or Afghanistan. About 20,000 US troops deployed in the Middle East and Afghanistan are within Iran’s missile range. Consequences, therefore, will be truly devastating of any conflict. Next 60 days will decide which way the wind blows.

ABOUT THE AUTHOR
Salman Rafi Sheikh, research-analyst of International Relations and Pakistan’s foreign and domestic affairs.