The Amazon Rainforest is Burning as Bolsonaro Fans the Flames

August 24, 2019 7 minutes read
Please make sure these dispatches reach as many readers as possible. Share with kin, friends and workmates and ask them to do likewise.

A DISPATCH FROM RESUMEN LATINOAMERICANO 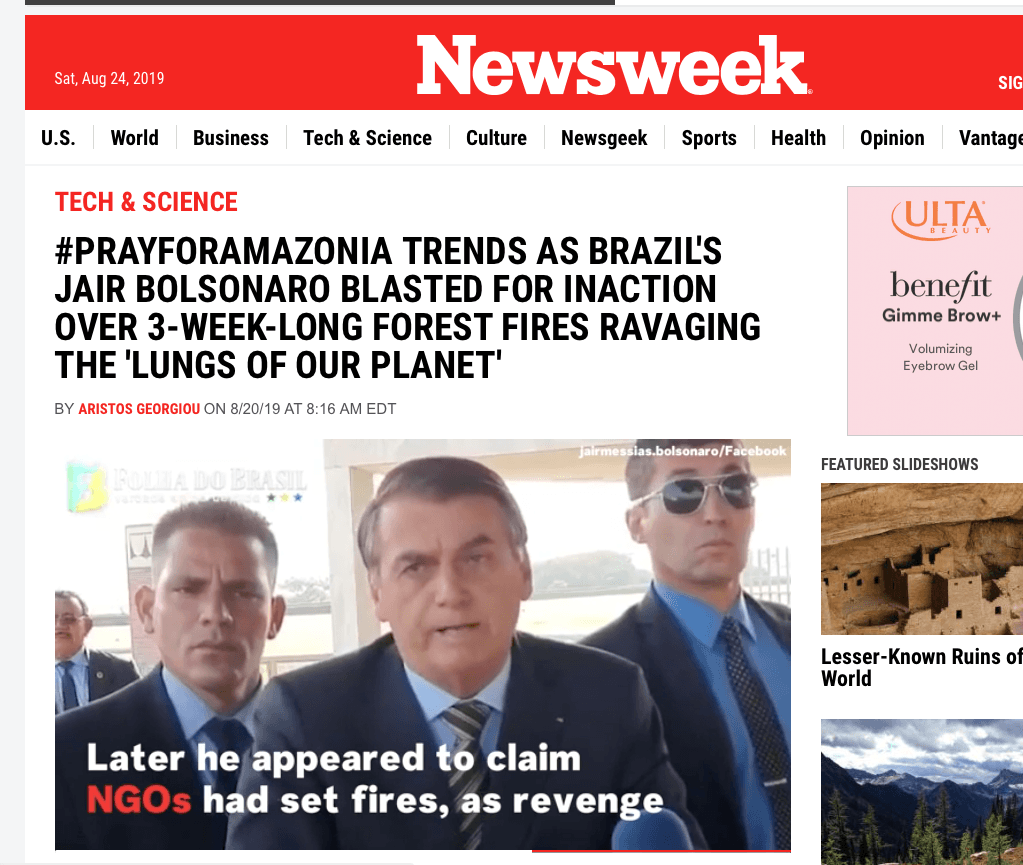 The crisis is so acute and undeniable that even imperialist media which have supported Bolsonaro all along, such as Newsweek, are now forced to castigate him to maintain credibility.

[dropcap]B[/dropcap]razil’s National Institute for Space Research (INPE), confirmed with satellites what environmentalist organizations around the world had been announcing since President Jair Bolsonaro took office; the Amazon, often called the “Lungs of the World,” is in danger.

Between January and August, 72,843 intermittent wildfires have been registered in the Brazilian Amazon rainforest due to the “development policy” undertaken by President Jair Bolsonaro in matters of agriculture and mining. Non-governmental organizations used the hashtag #PrayForAmazonia in the different social media throughout the week to try and get Bolsonaro’s attention given the massive hectares of forests that are being scorched by fire.

“I used to be called Captain Chainsaw. Now I Am Nero, setting the Amazon on fire. But it is the season of the fire,” the President arguing it was a natural process in the face of criticism. The President even rejected the data provided by INPE, which had reported that fires increased by 83 percent this year compared to the same period in 2018. At least 68 protected areas have been affected by the fires. INPE director was dismissed by Bolsonaro under the accusation of fostering a “terrible” image of Brazil abroad with “fake” data.

The injuries to nature and beast caused by criminal sociopaths like Bolsonaro are extremely grave, but you will see that the response from capitalist politicians around the globe, especially those in the sanctimonious EU, will be ludicrously inadequate. After all the righteous posturing, things will go on deteriorating.

The institute  emphatically denied that fires may have increased due to the dry season or natural events on their own because “there is nothing strange on the climate this year or in the rainfall amount over the Amazon region.” Fires may be common during the dry season but they are also caused by farmers who make illegal burning to clear lands and carry out their business who are sheltered by the lack of government control, enforcement of environmental laws and Bolsonaro’s policies that favor  landowners.

The Amazon Rainforest, the “Lungs of the World”

Between last Thursday and up to Wednesday, INPE reported 9,507 new wildfires, especially in the Amazon Basin —house for the world’s largest tropical rainforest and vital to counteract global warming. Fires have spread through the states of Acre, Rondonia, Mato Grosso and Mato Grosso do Sul, reaching the triple frontier between Brazil, Bolivia and Paraguay.

With the world’s largest river and source of natural resources where countless of animal and plant species coexist, the Amazon is the home to 34 million people, including over 350 indigenous groups.

Social media users from around the globe have been demanding the media spread information about this environmental disaster. “While U.N. experts on climate change warn about the importance of taking care of the planet’s land, soil and forests, the Amazon has been on fire for 16 days,” highlighted a message in Twitter.

International institutions and companies, including NASA, showed satellite images of high concentrations of carbon monoxide in the areas where it had been declared an environmental alert due to the increase of fires. NASA researcher Santiago Gasso posted on his Twitter account that the Latin American area covered by smoke was about 3.2 million square kilometers.

Bolsonaro —who welcomed the fact that U.S. President Trump abandoned the Paris Agreement on climate change and refused to host the 2019 UN Climate Change Conference — seems oblivious to the problem.

Since he took office, Jair Bolsonaro made it clear that environmental protection would not be a priority for his administration. One of his first election promises was merging two opposed ministries: Agriculture and Environment. The decision was adamantly rejected by environmental organizations because they warned that the ministry responsible for fostering agriculture and cattle raising business would be the same in charge of granting environmental permits for production in preserved areas.

Because he could not swing that, Bolsonaro appointed as Environment Minister right-wing lawyer Ricardo Salles, previously in charge of a similar office in Sao Paulo, accused of changing proposals in a plan to manage an environmentally preserved area to favor private enterprises. Also, one of his first measures as Minister was stopping indigenous land boundaries, ordering that such decisions should first be analyzed by the Agriculture Ministry.

Bolsonaro took it even further by promising to open indigenous lands protected by the Constitution for mining and forest exploitation under the excuse that indigenous people would live off of those royalties. This plan could not be anymore condescending and disgusting to indigenous people who look at land as life and not as a commodity for capital investment. The President is also expecting to complete the construction of Angra 3, a nuclear power plant on the coast between the regions of Sao Paulo and Rio de Janeiro. The area destined for the project is Itaorna beach, well known for landslides that have historically shown an unstable soil. The plant would complement a large hydroelectric dam in Belo Monte, over the Xingu River which is part of the Amazon pluvial system.

Norway has directly accused Brazil of causing the deforestation of the Amazon and is not properly investing the money deposited by that country and Germany into the Amazon Fund, created in 2008 for the prevention, monitoring and preservation of the region. The Norwegian Government halted the remittance of 30 million dollars to Brazil. Mad, Bolsonaro shared fake news in his social media profiles.  “Look at the killing of whales sponsored by Norway,” posted Bolsonaro, who usually complains that the media has a biased coverage. His tweet includes a video and photos of a whaling hunt with sad background music. The problem  was the images, had been taken in the Faroe Islands, a North Atlantic archipelago owned by Denmark.

The German Government had already blocked around 35 million euros (about $39 million) last August 10 for different programs until deforestation figures had improved again, or at least when they stabilize.  Bolsonaro in perfect Trumpian style said, “They can use that money as they please. Brazil does not need it.”

Threatened by German Foreign Minister Angela Merkel of not sending resources to preserve the area, Bolsonaro responded with more scorn on the two countries: “She should keep the money and reforest Germany. And what was the other country? Sweden, Norway…? Oh! Yes, Norway, which is not giving a similar amount to Brazil. Send it to Angela Merkel so she can reforest Germany.”

The Interstate Committee on Legal Sustainable Development for the Amazon, made up by 27 Brazilian states, stated that they were going to bypass the federal government  and were expecting “to have a direct dialog” with the countries that finance the Amazon Fund for its preservation. “The Amazon bloc deplores the positions of the Brazilian Government that caused the suspension of resources of the Fund,” reads the document that was signed by governors of the nine states of the Amazon region.