Home AMERICAN BRAINWASH CAN RUSSIA NEGOTIATE A NO-WAR PACT WITH A GENOCIDAL ADVERSARY AS CONVINCED OF ITS RACIAL SUPERIORITY AS THE GERMANS WERE ONCE? GORILLA RADIO ANSWERS

CAN RUSSIA NEGOTIATE A NO-WAR PACT WITH A GENOCIDAL ADVERSARY AS CONVINCED OF ITS RACIAL SUPERIORITY AS THE GERMANS WERE ONCE? GORILLA RADIO ANSWERS

January 19, 2022 7 minutes read
Our articles depend on you for their effectiveness. Share with kin, coworkers and friends. 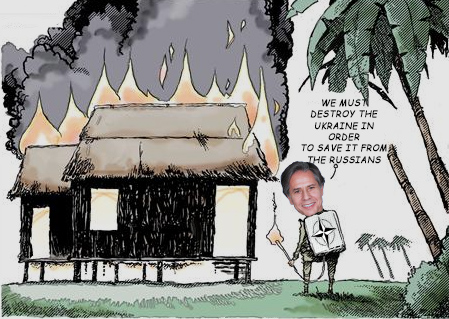 The current generation of Russian leaders was educated to believe that imperialist and capitalist systems like the North Atlantic Treaty Organisation (NATO) and the United States make  rational and predictable calculations of their self-interest; and that they can count the costs and casualties of warmaking; especially when nuclear weapons are launched with mutually assured destruction of the adversaries.

But Russian leaders find it difficult to accept that the current US leadership, especially Secretary of State Antony Blinken (lead image) and his Under Secretary, Victoria Nuland, are Russia-hating racists committed to a policy of genocide against the Russian state and against Russians wherever they are located in the territories of the old Russian Empire or the Soviet Union, especially in the Donbass region of eastern Ukraine.

“The culture of diplomacy and compromise is all but lost”, Russian Foreign Minister Sergei Lavrov conceded last week.   “The US line in the international arena is dictated by the awareness of its own exceptionalism. This is not even denied.” “Foaming at the mouth” is as close as Lavrov came to characterising Blinken in person. The new sanctions threat, he added, is “a nervous breakdown of sorts. In the endless assertion of their own greatness, these people have reached a psychological state that is difficult to comprehend.”

American exceptionalism is the diplomatic Russian term for American racism’s plan for liquidating the Russian ethnic group, language, culture, and resources in the Ukraine.

Since Russia’s defeat of the German attempt to do this between 1941 and 1945, and then the defeat of the US-NATO plan to mobilize the surviving Ukrainian allies of the Wehrmacht, the genocide plan keeps reappearing in Kiev and Washington (in London too, though not in Berlin). That it would do so, reanimated and rearmed after the independence of Ukraine was declared in 1991, was certain. The US-led putsch in Kiev in February 2014 then revived the genocidal plan in most of its older German particulars.

This genocide is not the crime of genocide as the US criminal code defines and prosecutes it when Americans commit the crime.  That is because in 1987 the US Congress changed the universal definition of genocide, adopted by all members of the United Nations (UN) in 1948, opening for Americans two very large loopholes. The senator who drafted these and put them into law was Joseph Biden.

Genocide is an unspeakable, unmentionable crime when it’s our side that is planning to commit it in future tense.

It’s speakable if our side committed the crime in the past tense, long enough ago for the perpetrators to be beyond prosecution; punishment limited to the removal of statues from public squares; for remembering,  memorial days announced by politicians running for office; and payment of reparations voted by politicians not at  immediate risk of re-election.

In 1948, the UN Convention on the Prevention and Punishment of the Crime of Genocide defined in Article II that genocide is “the intent to destroy, in whole or in part, a national, ethnical, racial or religious group”. The term had been first coined in 1944 and was then drafted into the convention following the Nuremberg trials of the wartime German leadership.

For prosecution and trial, the International Criminal Court (ICC) has adopted this language as Article 6 on the list of crimes the court claims to have the jurisdiction to prosecute.   To date, there has been only one genocide indictment by the ICC; that targeted the former Sudanese president Omar al-Bashir for the war in Darfur. No prosecution has resulted. The US opposes ICC jurisdiction to prosecute US officials or soldiers. The first warning that this might happen was issued in 1946 by US Supreme Court justice Frank Murphy in his dissent from the Supreme Court’s ruling to confirm the conviction and execution of Japanese General Tomoyuki Yamashita for war crimes (not genocide); for details, read this.

In 1987, thirty years later, the US Congress added two qualifiers to the provision in the US code which defines genocide as a crime to be prosecuted when Americans commit it. This new US law declared genocide is “the specific intent to destroy, in whole or in substantial part, a national, ethnic, racial, or religious group”. “Substantial part,” the statute now counted, meant “a part of a group of such numerical significance that the destruction or loss of that part would cause the destruction of the group as a viable entity within the nation of which such group is a part.”

Retrospectively, these loopholes left the Germans to hang after their trials in Nuremberg. Prospectively, so long as the genocidal US and Ukrainian planners for the Russians in eastern Ukraine are not as specific as the Germans had been in their public statements and their classified orders, they are off the hook.

More problematic is the war crime committed when Blinken, Nuland, President Vladimir Zelensky and their staffs and generals plan war against Russia using the civilian population of the Donbass as shields.

Gorilla Radio is broadcast every Thursday on CFUV 101.9 FM from the University of Victoria, British Columbia, Canada.  The radio station can be heard here.     The Gorilla Radio transcripts are also published by the Pacific Free Press and on the blog.    For Chris Cook’s broadcast archive, click to open.

by Editor - Monday, January 17th, 2022
John Helmer is the longest continuously serving foreign correspondent in Russia, and the only western journalist to direct his own bureau independent of single national or commercial ties. He first set up his bureau in 1989, making him today the doyen of the foreign press corps in Russia. His family has many links to Russia.