President of Russia - Supreme Commander Armed Forces of the Russian Federation, Vladimir Putin attended the military parade to commemorate the 77th anniversary of the Victory in the Great Patriotic War 1941–1945 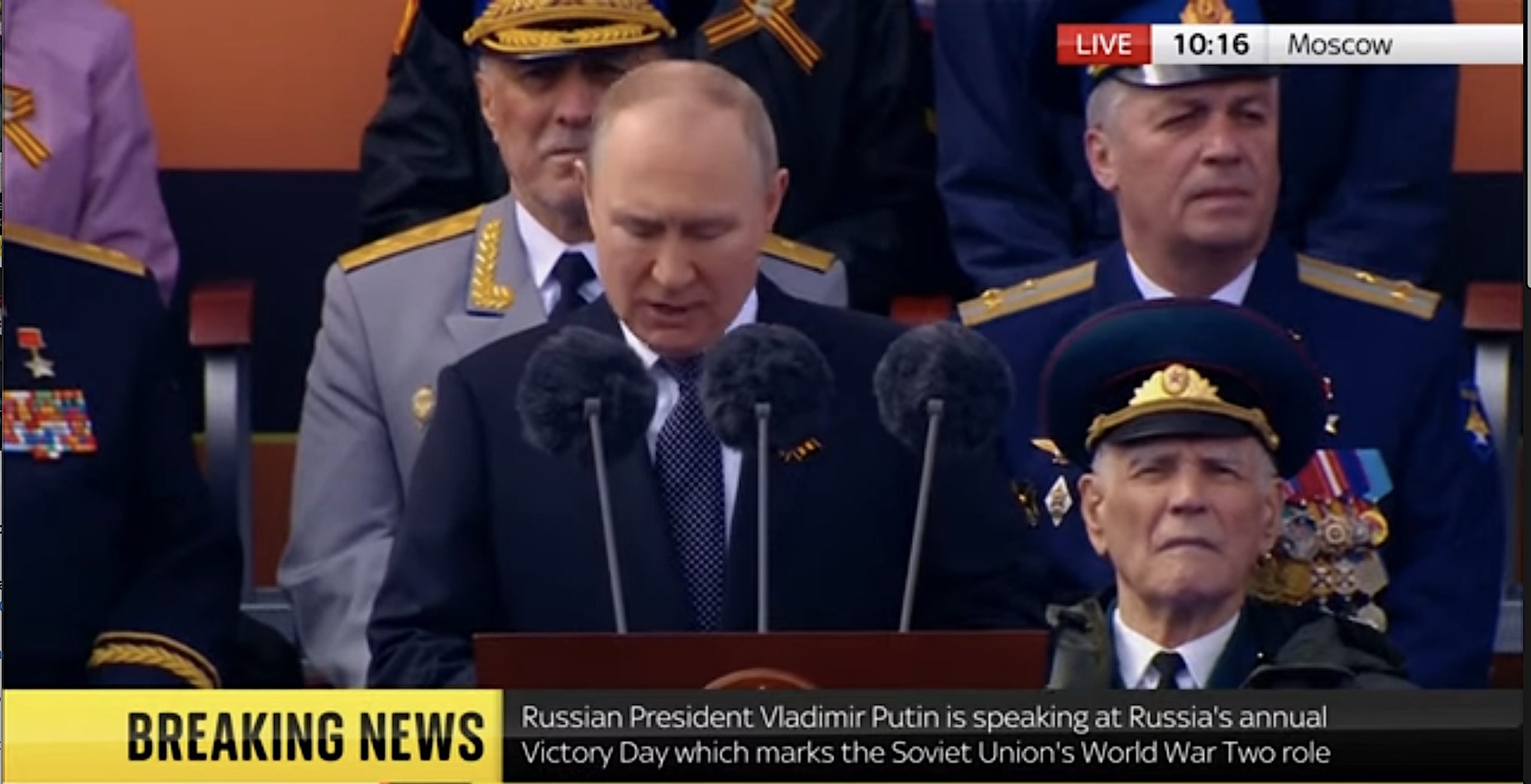 Performance President of Russia at the military parade

Dear veterans!
Comrade soldiers and sailors, sergeants and foremen, midshipmen and ensigns!
Comrade officers, generals and admirals!
I congratulate you on the Great Victory Day!

The defense of the Motherland, when its fate was being decided, has always been sacred. With such feelings of true patriotism, they rose for the Fatherland militias of Minin and Pozharsky, went on the attack on the Borodino field, fought with the enemy near Moscow and Leningrad, Kyiv and Minsk, Stalingrad and Kursk, Sevastopol and Kharkov.

So now, these days you fight for our people in the Donbass. For the security of our Motherland - Russia.

May 9, 1945 is forever inscribed in world history as the triumph of our united Soviet people, their unity and spiritual power, unparalleled exploits at the front and in the rear.

Victory Day is near and dear to each of us. In Russia There is no family that the Great Patriotic War would not burn. Her memory never fades. On this day, in the endless stream of the "Immortal Regiment" - children, grandchildren and great-grandchildren of the heroes of the Great Patriotic War. They carry photographs of their loved ones who died soldiers who have remained forever young, and veterans who have already left us.

We are proud of the unconquered, valiant generation winners, by the fact that we are their heirs, and our duty is to keep the memory of those who crushed Nazism, who bequeathed us to be vigilant and do everything to horror the global war did not happen again.

And therefore, despite all the differences in international relations, Russia has always advocated the creation of a system of equal and indivisible security, a system that is vital for the entire world community.

Last December, we proposed to conclude security agreement. Russia called on the West to an honest dialogue, to search for reasonable, compromise solutions, to take into account each other's interests. Everything in vain. The NATO countries did not want to hear us, which means that in fact they had completely different plans. And we saw it.

In the open, preparations were underway for another punitive operations in the Donbass, to the invasion of our historical lands, including Crimea. In Kyiv, they announced the possible acquisition of nuclear weapons. NATO bloc started active military development of the territories adjacent to us.

Thus, absolutely an unacceptable threat for us, and directly at our borders. Everything said that a clash with neo-Nazis, Bandera, on whom the United States and its younger partners staked, would be inevitable.

I repeat, we have seen how the military infrastructure, how hundreds of foreign advisers began to work, there were regular deliveries of the most modern weapons from NATO countries. The danger grew with each by day.

Russia gave a preemptive rebuff to aggression. It was forced, timely and the only correct decision. Decision sovereign, strong, independent country.

United States of America, especially after the collapse of the Soviet Union, started talking about their exclusivity, thereby humiliating not only the whole world, but also their satellites, who have to pretend that they they don’t notice anything, and humbly swallow it all.

But we are a different country. Russia has a different character. We we will never give up love for the Motherland, from faith and traditional values, from customs ancestors, from respect for all peoples and cultures.

And in the West, these thousand-year-old values, apparently, decided to cancel. Such moral degradation became the basis of cynical falsifications of the history of World War II, inciting Russophobia, praising traitors, mockery of the memory of their victims, erasing the courage of those who won and suffered the Victory.

We know that American veterans who wanted to come to the parade in Moscow, in fact they forbade it. But I want, so that they know: we are proud of your exploits, your contribution to the common Victory.

We honor all the soldiers of the allied armies - Americans, British, French - members of the Resistance, brave soldiers and partisans China - all those who defeated Nazism and militarism.

Today, Donbass militia together with the soldiers of the Army Russians are fighting on their own land, where the combatants of Svyatoslav and Vladimir defeated the enemy Monomakh, soldiers Rumyantsev and Potemkin, Suvorov and Brusilov, where to die heroes of the Great Patriotic War stood - Nikolai Vatutin, Sidor Kovpak, Ludmila Pavlichenko.

I am now addressing our Armed Forces and the Donbass militia. You are fighting for the Motherland, for its future, so that no one did not forget the lessons of World War II. So that there is no place in the world for executioners, punishers and Nazis.

Today we bow our heads before the blessed memory of all, whose life was taken by the Great Patriotic War, before the memory of sons, daughters, fathers, mothers, grandfathers, husbands, wives, brothers, sisters, relatives, friends.

We bow our heads before the memory of the martyrs of Odessa, burned alive in the House of Trade Unions in May 2014. Before the memory of the old, women and children of Donbass, civilians who died from ruthless shelling, barbaric strikes by neo-Nazis. We bow our heads before our comrades-in-arms who died the death of the brave in a righteous battle - for Russia.

A moment of silence is announced.

The death of each of our soldiers and officers is grief for all of us and an irreparable loss for family and friends. state, regions, enterprises, public organizations will do everything to surround with care such families to help them. We will provide special support to the children of the dead and wounded comrades. The Decree of the President on this was signed today.

I wish the wounded soldiers and officers a speedy recovery. And I thank the doctors, paramedics, nurses, medical staff military hospitals for selfless work. Low bow to you for what fighting for every life - often under fire, on the front line, not sparing yourself.

We remember how the enemies of Russia tried to use against us gangs of international terrorists sought to sow national and religious enmity in order to weaken and split us from within. Nothing succeeded.

Today our fighters of different nationalities are together in battle, cover each other from bullets and shrapnel like brothers.

And this is the strength of Russia, the great, indestructible strength our united multinational people.

Today you defend what your fathers and grandfathers fought for, great-grandfathers. For them, the highest meaning of life has always been well-being and security. Motherland. And for us, their heirs, devotion to the Fatherland is the main value, reliable pillar of Russian independence.

Those who crushed Nazism during the Great Patriotic War war, showed us an example of heroism for all time. This generation of winners, and we will always look up to them.

Glory to our valiant Armed Forces!

For Russia! For victory!

Big Pharma Is Making HOW MUCH Off Of The Vaccines!?!

RUSSIA’S SARMAT: The most dangerous and most powerful...

Gonzalo Lira: What Russia Has To Do After...

How blaming Putin is helping Putin

What Happens To Europe When Russia Wins, and...

Nikolai Patrushev: Truth Is on Our Side –...