"I believe there is a ruling class that determines international policy based upon their perceived class interests, and who make the rest of us fight their wars and pay the bills..."

August 21, 2022 8 minutes read
Please make sure these dispatches reach as many readers as possible. Share with kin, friends and workmates and ask them to do likewise. 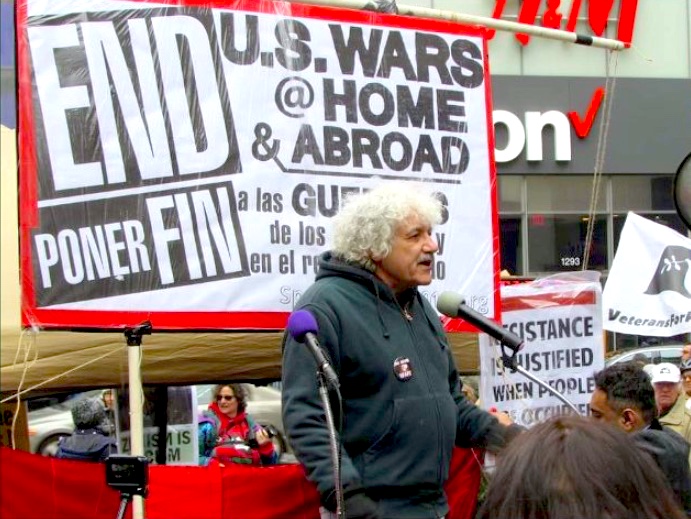 Lombardo speaking at a rally.

Events continue to unfold at a quickening pace. Facing an alarming escalation in tensions around the world, we asked Joe Lombardo for his most current thoughts.

Joe Lombardo is the co-coordinator of the United National Antiwar Coalition (UNAC) and has been an organizer in the anti-war movement and a labor activist for decades. He is a cofounder and lead organizer for Bethlehem Neighbors for Peace, a local anti-war group based near Albany, New York, a member of the Troy Area Labor Council, and former staff person of the Vietnam era National Peace Action Coalition (NPAC). He is the author of many articles and a frequent radio and TV commentator.

We focus here on the realities of the international power struggle unfolding in real time, specifically addressing the role of the U.S. in the tensions and its capacity to reduce them. We are looking for paradigm-shift ideas for improving the prospects for peace. His responses below of are exactly as he provided.

Here is what Joe had to say.


Q. We hear a lot of terms and acronyms bandied about. ‘Deep State’ … ‘MIC’ … ‘FIRE sector’ … ‘ruling elite’ … ‘oligarchy’ … ‘neocons’.  Who actually defines and sets America’s geopolitical priorities and determines our foreign policy? Not “officially”.  Not constitutionally. But de facto.

A. I look at this in class terms.  I believe there is a ruling class that determines international policy based upon their perceived class interests, and who make the rest of us fight their wars and pay the bills. They control the 2 main parties and their politicians through financial control. They also control the media, the police and courts and the military. They don’t all necessarily agree on what to do, so differing opinions are debated through the Republican and Democratic Parties.  I don’t believe that there is a “deep state” that works independently of that ruling class to determine policy.

Q. We’ve had decades of international tensions. Recent developments have seen a sharp escalation in the potential for a major war. The U.S. apparently cannot be at peace. “Threats” against the homeland are allegedly increasing in number and severity. The trajectory of our relations with the rest of the world appears to be more confrontations, more enemies, more crises, more wars.

Is the world really that full of aggressors, bad actors, ruthless opponents? Or is there something in our own policies and attitudes toward other countries which put us at odds with them, thus making war inevitable and peace impossible?

A. I believe the aggressor everywhere is US imperialism.  The US has about 20 times the number of foreign military bases as all other countries combined, they have a military budget close to that of the rest of the world. The US is the only country that has used nuclear weapons on people.  They have invaded one country after the next, occupied many, caused coups, imposed sanctions to destroy the economy of countries that don’t toe the US imperialist line, and have built opposition in those countries that they can exploit through the CIA, NED, USAID and other groups to cause conflict and regime change.

These policies have caused a lot of anger against the US.  If that anger is met by military force, we have war.

Q. Our leaders relentlessly talk about our “national interests” and our “national security”, warning that both are under constant assault. Yet, we spend more than the next nine countries combined on our military. Why does such colossal spending never seem to be enough?

A. The amount of spending can never be enough because the US is using the Military Industrial Complex to siphon money out of the hands of the working people and into the hands of the wealthy elites. This ‘easy money’ process has recently been stepped up, especially in the Ukraine war.

We have no common “national interests.”  The obscenely wealthy, who run the country have one set of interests and the working people have another. Our national security is not guaranteed by the military but by good jobs, healthcare, education and by satisfying human needs and seriously addressing climate change.  We need a society with a much more equal distribution of wealth.  This will stop our conflicts nationally and internationally.

Q. It’s evident that you, and the many individuals who follow you and support your work, believe that America’s direction in both the diplomatic sphere and in the current conflict zones represents an exercise of government power gone awry. Can you paint for us in broad strokes the specific changes in our national priorities and policies you view as necessary for the U.S. to peacefully coexist with other nations, at the same time keeping us safe from malicious attacks on our security and rightful place in the world community?

A. The US has to stop exploiting other nations as well as the working class at home.  A much more equal distribution of wealth nationally and internationally, combined with a serious attack on the endemic white supremacy and male dominance in our society and an end to all discrimination is the only way we can coexist with others at home and abroad.

Q. The general public, especially when it’s aware of the self-sabotaging results of our current foreign policies and military posturing, clearly wants less war and militarism, preferring more peaceful alternatives on the world stage and greater concentration on solving the problems at home. As peace activists, we are thus more in line with the majority of citizens on issues of war and peace, than those currently in power.

What happens if we determine that those shaping current U.S. policy don’t care what the citizenry thinks, are simply not listening to us? What if we conclude that our Congress, for example, is completely deaf to the voice of the people? What do we do? What are our options then? What are our next concrete steps as political activists in working toward a peaceful future?

A. I think we will never make the basic changes that we need to have a peaceful and prosperous world and country through the present political structures.  More and more people are giving up on the two-party system.  Our corporate media keeps us in the dark.  We are seeing increased censorship and attacks on those who tell the truth by expressing opinions different from the government’s narrative. These attacks include those on Julian Assange, Daniel Hale and the recent FBI raid on the African People’s Socialist Party among others.  If the people come to the conclusion that we need basic systemic change and we are unable to get it through our present political structures, we will have to fight for it in other ways.  There are many ways that people have fought for change in the past and have won significant changes, these include mass mobilization, mass civil disobedience and general strikes.  All options may need to be considered, we will get freedom and peace, in the words of Malcolm X, “by any means necessary.”
• • •

We are grateful to Joe Lombardo for sharing his valuable and thought-provoking views. The interview was arranged by John Rachel, Director of the Peace Dividend Project. The Peace Dividend strategy is not a meme or a bumper sticker. It is an end-to-end methodology for challenging the political establishment and removing from power those compromised individuals who work against the interests of the great majority of U.S. citizens. The only hope for our hyper-militarized nation is each and every one of us having a decisive voice in determining the future we want for ourselves and our children.

Sabotage, terrorist and other diversionary attacks are a real risk for Russia (+addendum)