It's ironic that Putin, the man relentlessly demonized and insulted by the media whores and politicians in the West, is the person that humanity owes the most for the avoidance of nuclear war

October 30, 2022 5 minutes read
Please make sure these dispatches reach as many readers as possible. Share with kin, friends and workmates and ask them to do likewise.

I
think it’s good to show this again to remind people of some of the historical context of the current proxy war between Russia and the US/NATO in Ukraine. The first portion of the video is of Putin discussing his concerns at the 2016 St. Petersburg International Economic Forum to a group of western journalists about the placing of anti-ballistic missiles in Romania (and later Poland) as a result of the US having pulled out of the Anti-Ballistic Missile (ABM) Treaty in 2002, and the national security threat this poses to Russia and why. The last portion is a clip from Putin’s famous 2007 speech at the Munich Security Conference in which he touched on this same emerging problem.

As Ray McGovern discussed this January, Putin had requested an urgent phone call with President Biden on December 30, 2021 with respect to the talks that were to take place regarding Russia’s proposed security treaties with the US and NATO. During that call, Putin had reportedly obtained a promise from Biden that the US had no intention of placing offensive missiles in Ukraine. After that phone call, Russia drew back 10,000 of its troops from near the Ukrainian border.

Apparently, someone in the Biden administration put the kibosh on that promise and the subsequent diplomatic talks failed.—NB

Inessa S
Initially, I translated only a small portion of this segment as I felt the key message must be made obvious. However, I have been pleasantly surprised with many people around the world reaching out to translate this into other languages, as well as to see the full address. This candid conversation took place with representatives of various media outlets during the St Petersburg International Economic Forum, in June 2016. Putin urged journalists to report genuinely on the impending danger that is a nuclear arms race.

Nobody has anything to gain from a nuclear stand-off against Russia. The power hungry decision-makers are few in number, but powerful enough to have subverted mainstream media to misrepresent Russia as the main threat to international security.

Back in 2007, Putin informed that Russia will develop its weaponry to counter US advances. This was said in response to the US missile defense system that was starting to be developed at the time (previously prohibited in international law.)

With the NATO missile "defense system" on Russia’s doorstep – the threat to international security is very real; not that you would know it via mainstream media. 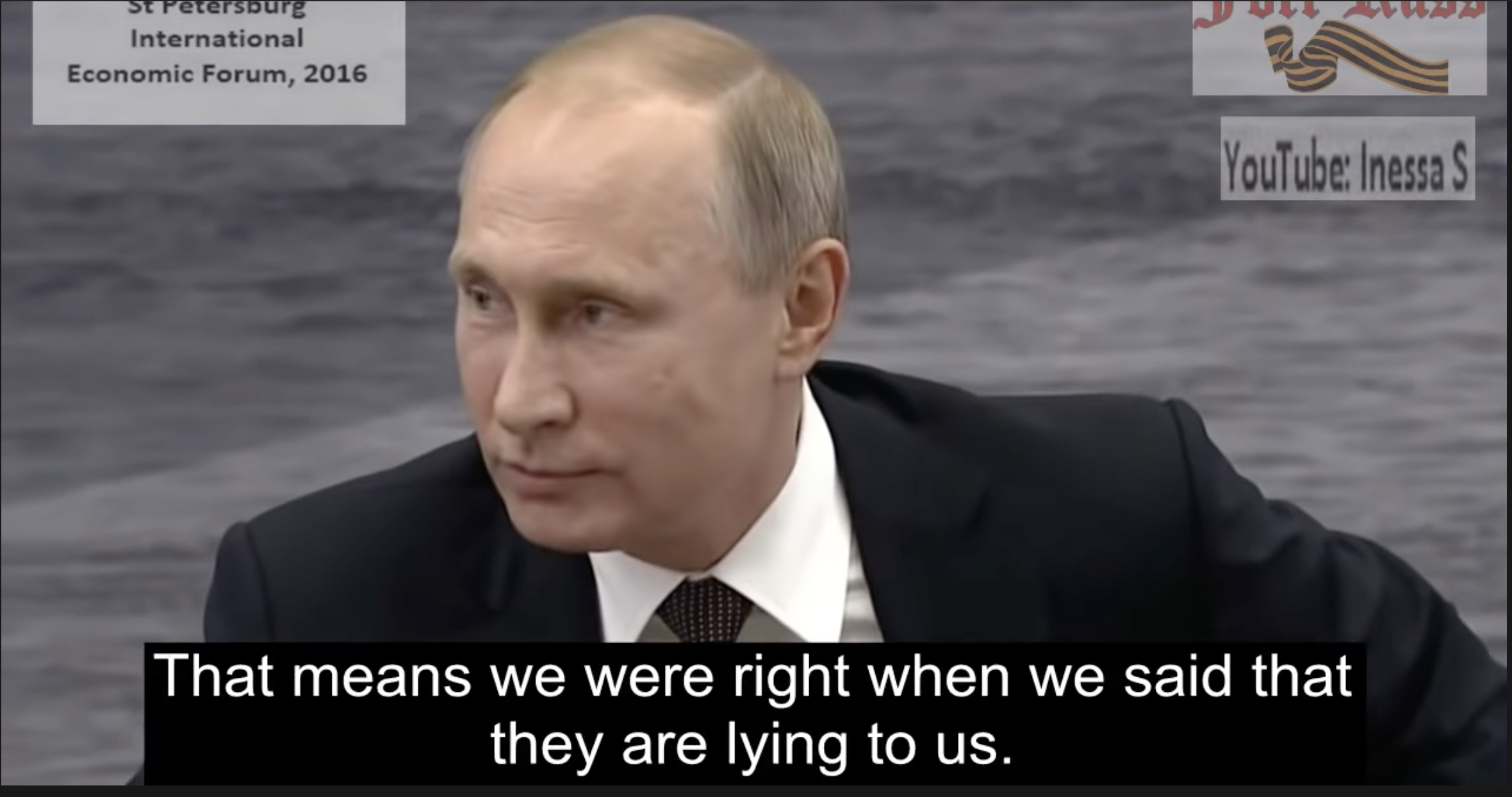 In 2002, the United States unilaterally and without consultation, withdrew from the landmark Anti-Ballistic Missile (ABM) Treaty. President George W. Bush noted that the treaty is “now behind us,” describing the ABM Treaty as a Cold War relic.

Signed in 1972, the ABM Treaty barred both the US and the USSR from deploying national defenses against long-range ballistic missiles. The treaty was based on the premise that if either superpower constructed a strategic defense, the other would build up its offensive nuclear forces to offset the defense.

The superpowers would therefore quickly be put on a path toward a never-ending offensive-defensive arms race, as each tried to balance its counterpart’s actions. Until Bush took office, the Treaty was referred to as a “cornerstone of strategic stability” because it facilitated later agreements, reducing U.S. and Russian strategic nuclear arsenals.

The US, assuming that a weakened Russia will never again be in a position to counter US hegemonic power, proceeded to encroach on Russia’s borders through its manipulation of NATO objectives.

Today, there is no instrument in international law that prevents the possibility of mutually assured destruction. Putin has been sending out warnings for over 10 years – all of which fell on deaf ears.

Banned materials: A site dedicates itself to preserving precious documents from political deletion