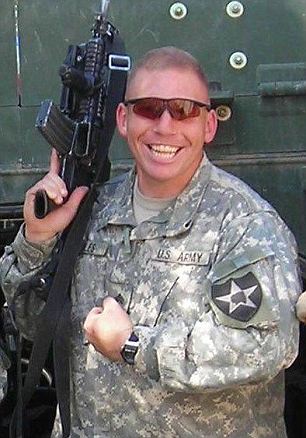 Staff Sgt. Robert Bales: The smiling assassin—how much of a rotten apple is he? Isn’t what he did far more common—in fact perhaps a small deviation from “tacit policy” —than what the press reports? How much of a coverup is going on for obvious p.r. reasons?
.

On March 11, up to 20 US Special Forces (trained killers) murdered 16 Afghan civilians, including nine children aged 2 – 12 while they slept. Two women were also raped before soldiers killed them. Bodies of all victims were then burned to conceal evidence.

It wasn’t an isolated incident. It happens regularly in all US wars. Rarely is anyone held accountable, especially responsible parties up the chain of command to the top. More on that below.

Sergeant Robert Bales “is accused of walking away from his remote base in southern Afghanistan and shooting and stabbing members of several families in a nighttime ambush.”

He alone was charged for what up to 19 others committed.

“The Army has not suggested a motive.”

Commanders deploy similar death squads regularly to kill with impunity. Bales is the exception that proves the rule. Like others occasionally charged, it’s done to absolve higher-ups. Guilt goes right to the top.

In his 1948 book titled, “Politics among Nations: the Struggle for Power and Peace,” Hans Morganthau discussed post-WW II political realism and power politics.

His vision was darkly Hobbesian. He called international law, world organizations, and morality “irrelevant” when nations go to war. Winning alone matters. At issue is gaining absolute power at the expense of rule of law principles, democratic values, targeted countries, and most people everywhere.

Today’s America reflects his might over right theme. It’s likely worse than he imagined, given weapons able to destroy humanity and perhaps one day do it.

“Throughout the twentieth century, the promotion of international law, organizations, human rights, and the US Constitution has consistently provided the United States with the best means for reconciling the idealism (and aspirations) of American values….with the realism of world politics and historical conditions.”

However, America’s Hobbesian agenda ignores them. Post-WW II, permanent wars raged for unchallenged global dominance. Rule of law principles and democratic values are sacrificed. War and violence are glorified in the name of peace. One conflict begets another.

Afghanistan is America’s longest one. It rages without end. Justifying it defends the indefensible. Francis Boyle’s latest article titled, “End the Crime That Is the War on Afghanistan,” states:

“….the Bush administration’s war against Afghanistan cannot be justified on the facts or the law. It is clearly illegal. It constitutes armed aggression. It is creating a humanitarian catastrophe for the people of Afghanistan.”

Occasionally charging low-level soldiers with murder or other crimes suppresses their regularity, and absolves responsible higher-ups.

In his book titled, “The ‘Good Soldier’ On Trial: A Sociological Study of Misconduct by the US Military Pertaining to Operation Iron Triangle, Iraq,” Stjepan Mestrovic documented disturbing evidence of “US government mistreatment of its own soldier-prisoners as well as foreign ‘detainees.’ “

“The common sense of mankind demands that law shall not stop with the punishment of petty crimes by little people. It must also reach men who possess themselves of great power and make deliberative and concerted use of it to set in motion evils which leave no home in the world untouched.”

America’s bound by the same standard under fundamental US and international laws. But they’re not applied. Mestrovic exposed the “systemic dysfunctions in the army as well as American society.” As a result, innocent victims pay for their superiors’ crimes.

In violation of international and US law, as well as the Army’s own code, brigade commander, Col. Michael Steele, illegally ordered troops to kill every military-aged Iraqi on sight. Disobedience would have brought court-martials and likely imprisonment.

Obeying resulted in convictions of conspiracy, murder, aggravated assault, and/or obstruction of justice – for following orders. Higher-ups are routinely absolved. Mestrovic “documented hundreds of instances of such deceit, chicanery, and dubious behavior on the part of the government.”

Attorney Paul Bergrin defended one of the accused. He wanted superiors up the chain of command to the top held responsible, including Rumsfeld, Bush and Cheney. As a result, he was wrongly charged with multiple serious offenses. He’s imprisoned and on trial for his life and liberty – for doing his job responsibly.

Charging Robert Bales alone for 16 Afghan murders replicates how convicted Operation Iron Triangle soldiers paid for their superiors’ crimes up the chain of command to the top.

Military disciple is strict, especially in war theaters. Disobey and pay dearly even if follow US Army Field Manual (FM) 27-10 provisions. They incorporate Nuremberg Principles, Judgment and the Charter and The Law of Land Warfare (1956).

It states that military or civilian personnel who commit crimes under international law bear responsibility and may be punished. It denies the defense of superior orders in committing them. It mandates disobeying lawless orders.

The code applies up the chain of command to the highest military and civilian levels. Yet low-level troops pay dearly for their superiors’ crimes.

It defiles Justice Jackson wanting top officials punished most of all: “men who possess themselves of great power and make deliberative and concerted use of it to set in motion evils which leave no home in the world untouched.”

Perhaps one day American war criminals will face their Nuremberg moment. It won’t compensate for decades of war, mass killing and destruction, torture as official policy, every other imaginable barbarity, and human suffering beyond comprehension.

Perhaps, however, it’s the only possible way to save humanity before calamitous war destroys it.

OpEds: ALEC/Koch Cabal Pushing Privatization of the US Postal Service for UPS and FedEx…

Both The Market and Government Are Irrational

Sooner or later, evil wants to...