Print this post.
Television Ratings for State of the Union Lowest In 14 Years
by MIKE WHITNEY 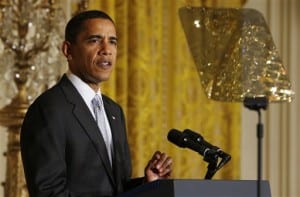 Barack Obama breaks records for cynicism. Wall Street could not have picked a better Trojan Horse.

If you didn’t catch Obama’s State of the Union speech on Tuesday night, you’re not alone. According to Nielsen ratings, Obama’s hour-long presentation garnered less than 34 million viewers, an all-time low for the president and the “second-lowest rated since Nielsen began recording viewership in 1993.”

Apparently, Americans would rather spend their time watching Simpsons reruns or fiddling with their iPhones than listening to the pompous pronouncements of the Dissembler in Chief.  And good for them. It goes to show that no one really believes that a junior senator with a pedigree in community organizing is setting policy for the world’s only superpower. The idea is ridiculous. Obama is merely the mask that conceals the ruthless machinery of Empire. The real power lies beyond the veil, in the Deep State apparatus which decides everything from drone strikes to Gitmo, from NSA dragnets to habeas corpus,  from deficit-slashing austerity to the “pivot to Asia”. Obama has no say-so in any of these decisions. He’s merely a public relations invention whose job is to look sincerely into the teleprompter while announcing the latest round of budget cuts or more of the deeply-regressive social policies his puppetmasters crave.  That’s his job and everyone knows it.

_______
The author may be more optimistic about Obama’s drop off in popularity than we are—stupidity dies hard in America—but there’s no doubt that the constant cynical betrayals are finally beginning to take a toll even among the true believers.
_______

Only now– judging by the SOTU ratings— he’s even failing at that task.

Because no one’s listening anymore. They’ve tuned him out, which means he’s lost his ability to shape public opinion.  President Snake-oil has become completely irrelevant, a non-factor in advancing elite policy. His presidency is effectively over. Good riddance.

That said, there have been some fine summaries of the SOTU speech that are worth reviewing. The best of these were posted on the World Socialist Web Site whose analysis (as usual) was laser sharp. Here’s a blurb from a piece by Bill van Auken:

“President Barack Obama’s State of the Union speech was a cynical propaganda piece, filled with fraudulent claims and promises that no one, least of all his audience at the US Capitol, believes in the slightest.

The annual address has long since become an ossified ritual, a kind of national pep rally into which social and political reality seldom intrudes…..

With Obama’s speech Tuesday night one had more than ever the sense of the president as chief representative of the financial aristocracy that rules America, speaking to a house filled with millionaire congress members and bought-and-paid-for representatives of big business.

It has more and more come to resemble a political echo chamber, in which the ruling establishment celebrates and talks to itself in utter indifference to the needs and concerns of the country’s working people.”  (“State of the Union: A bankrupt ruling class talking to itself”, Bill Van Auken, World Socialist Web Site)

Bravo, Van Auken! “An ossified ritual…. filled with fraudulent claims and promises that no one… believes in the slightest.”

That sums it up perfectly, doesn’t it?

“Obama’s State of the Union address Tuesday …. was a mixture of pro-business nostrums, militarist jingoism and a jumble of penny-ante proposals. The media’s attempt to promote the speech as a major address on inequality was a deliberate falsification aimed at drumming up interest among a generally indifferent and hostile population…..

(The speech) was a threadbare attempt to cover over the reality of the past year, a year in which the mask fell off a society riven by historically unprecedented levels of social inequality and mass poverty, overseen by a vast police-state spying apparatus, on the verge of another global war of incalculable consequences and presided over by the most right-wing administration in US history…

As has become traditional in such events, Obama singled out individuals in the audience, generally victims of the policies of the ruling class, who are exploited to make various political points. Nowhere was this more sickening than at the end of the speech, when the president heaped praise on a veteran severely maimed by an explosion in Afghanistan.

The assembled congressmen—responsible for wars of aggression that inflicted a similar fate on thousands of Americans, while killing hundreds of thousands of Afghans and Iraqis—gave a lengthy standing ovation to one of the victims of their criminal policies. This spectacle was a fitting conclusion to a nauseating political ritual.”  (“Obama’s State of the Union address: An empty and reactionary charade”, Joseph Kishore, World Socialist Web Site)

Both articles are worth reading in full.

Obama’s abysmal State of the Union ratings suggest that the country has turned against him. People don’t trust the president anymore and they certainly don’t want to listen to his lying bullshit for an hour or so. It’s easier just to change the channel … which millions of them did.

MIKE WHITNEY lives in Washington state. He is a contributor to Hopeless: Barack Obama and the Politics of Illusion (AK Press). Hopeless is also available in a Kindle edition. He can be reached at fergiewhitney@msn.com.

Amanda Knox and the Wages of American Imperialism