The Problem With Human Rights Organizations

The Human Rights Crisis is About Domination, Not Perception 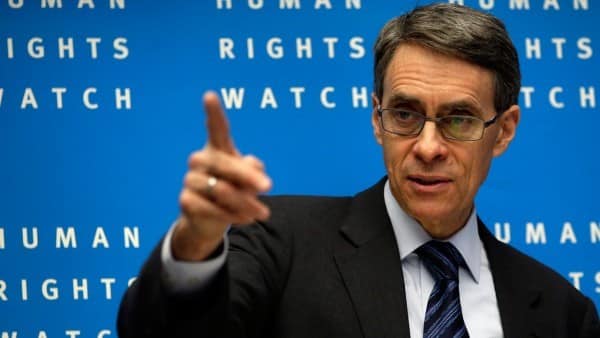 HRW’s Kenneth-Roth. How much can a corporate suit do in the area of genuine human rights, let alone push back against the corporate empire?

[dropcap]W[/dropcap]hen Israel is criticized about its rights-abusive policies in the West Bank and Gaza Strip, the refrain most often heard among local politicians is that the government’s hasbara—the Israeli propaganda machine—is inadequate. The problem, in other words, is not what Israel actually does to the Palestinians, but rather the inability to get its positive message across to the international community. This is usually referred to as “rebranding Israel”. The underlying assumption here is that the merchandise is fine, and only the packaging needs to be replaced.

Rachel Krys’ recent argument about the crisis of human rights is based on a similar logic, even though she is writing about a different issue. She tells us that most people in the UK do not support human rights, while arguing that this is happening because human rights are presented in a way that is disconnected from people’s everyday lives. She claims that if the public would hear less “negative discourse” about human rights and more “stories about old people challenging bad treatment, invasive decisions or the intrusion into their private and family life”, support for human rights would be much wider. Once again the problem with human rights has to do with perceptions, and the solution, here as well, is hasbara.

The relationship between representation and reality is, however, much more complex. It has to do with human rights themselves: the way they have been institutionalized, the political projects to which they lend themselves, their intricate connections to the state, and the alternative discourses of justice they omit and repress.

We do not assume, as many human rights practitioners and scholars do, that more human rights necessarily lead to more emancipation. Indeed, the assumption that people would believe in human rights if only they better understood human rights work is misguided. Human rights can, and often do, enhance domination. This issue becomes particularly urgent when NGOs that purport to criticize abuse align themselves with the very powers they investigate and criticize.

[dropcap]C[/dropcap]onsider a 2013 report on drone attacks in which Human Rights Watch (HRW) examines six unacknowledged US military attacks against alleged Al-Qaeda members in Yemen. Eighty-two people, of whom at least 57 civilians, were killed in these attacks. Yet this is a mere sample of the 81 attacks carried out in Yemen, and it does not include the hundreds of targeted killings in Pakistan and Somalia.

HRW argues that two of the six attacks were in clear violation of international humanitarian law because they only struck civilians, or they used indiscriminate weapons. HRW also states that:

“The other four cases may have violated the laws of war because the individual attacked was not a lawful military target or the attack caused disproportionate civilian harm, determinations that require further investigation. In several of these cases the US military also did not take all feasible precautions to minimize harm to civilians, as the laws of war require.”

The underlying logic of these statements is subtle, but very disturbing since it exposes how adherence to international law can advance domination. For HRW it is unclear whether the remaining four cases violated the law, but if it turns out that the military had used discriminate weapons, taken all the “necessary precautions”, and finally killed civilians while targeting militants, then the “deliberate killing by a government” in another country halfway across the globe does not in fact constitute a violation. Phrases like “all necessary precautions” are exactly where human rights advocates begin aligning themselves with military power.

Following the dictates of international humanitarian law, HRW goes on to discuss whether the “terrorist suspects” are in fact “valid military targets”, whether the situation in Yemen can be characterized as passing the “threshold of armed conflict” as well as whether the assassinations adhere to US policies of targeted killing. And, although it acknowledges the lawfulness of some of the attacks, it criticizes the US government for not offering compensation to families whose members were killed as civilian bystanders. Hence, as this report demonstrates, when human rights are subservient to international legal discourse, the best they can do is to call for a reduction of civilian casualties, the provision of economic compensation for victims, and guarantees that future targeted killings comply with the law.

Indeed, such reports underscore what happens to human rights once they have been hijacked by the law and become a prism for debating the legality or illegality of violence—namely, they cease to raise questions about the morality and legitimacy of the law itself. This becomes even more striking when reading the HRW report not only for what it says, but also for what it fails to say. For example, the report cites Faisal Bin Ali Jaber, a relative of a cleric and policeman wrongfully killed during a drone attack, as saying: “We are caught between a drone on one side and Al-Qaeda on the other.” And, yet, HRW fails to acknowledge that for Ali Jaber the drone attacks are tantamount to Al Qaeda’s acts of terrorism. This oversight is also a consequence of the reduction of human rights to the formal dictates of international law, an approach that HRW has doggedly adopted.

[R]egardless of the thousands of civilians killed during the drone wars, and the terrorizing effect these wars have had on entire populations, insofar as drones are armed with discriminate weapons and do not intend to kill civilians, the US drone wars are not—in HRW’s view—a terrorist act. In this way, the law permitting the dominant to kill is preserved and even reinforced by those who struggle for human rights. It is precisely when human rights denunciations are articulated in a way that complies with the sovereign’s right to kill that human rights become a discourse that rationalizes killing—what we call, counter-intuitively, “the human right to kill”.

Finally, it is crucial to ask whether the HRW’s drone report really represents the population in Yemen. Put differently, the problem of representation does not only or primarily have to do with how human rights are portrayed in the media, but rather involves the fact that human rights NGOs operate as if they had a natural mandate from the wretched of the earth. In reality, however, human rights NGOs prevent human rights from becoming a popular language deployed by the people for their own—popular—mobilization. In this sense, human rights can never become a tool of the masses, but only of those experts who claim to represent the wronged population.

The crisis of human rights, in other words, is not really one of perceptions. It is much more profound.

Nicola Perugini is Mellon Postdoctoral Fellow in Italian Studies and Middle East Studies at Brown University and the author of The Human Right to Dominate. (with Neve Gordon, Oxford University Press 2015).

PAR FOR THE COURSE: Media Uncritical of Justifications for Shooting Escaped Convict