Home ACTIVISTS & HEROES The Lesson of Grom and Shiba

[su_panel background=”#f8e4c6″ color=”#172501″ border=”5px solid #cccccc” shadow=”5px 1px 2px #eeeeee” radius=”2″]This is a story about Family, about what “family” really means, about what real Heroes are like, and what they do. This is a story about my unit, and about two men, Grom and Shiba, from my unit,  Суть времени, ” The Essence of Time”  (EoT).[/su_panel] There’s nothing like facing Death on a daily basis to 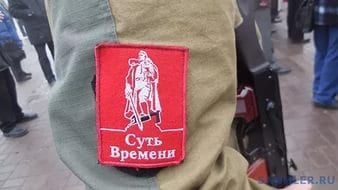 make you understand the true essence of time, and Shiba and Grom (“Grom” means “Thunder”) certainly do. They joined Vostok and EoT in the first days of the war, fought at Saur Mogila, then moved to the airport when we took up positions there in December 2014.  They were soldiers, but their main duty was driving journalists from Donetsk city center to the Front, near the airport, which was a very hot area back n the first months of 2015.I know, I was there.

On Easter Sunday, April 12th, 2015, in the village of  Zhabunki, near the airport, while driving a TV crew in a clearly marked civilian car, the Ukrainian Army opened fire on them with anti-tank rockets. The journalists in back were relatively unharmed, and eventually completely recovered. Shiba and Grom both lost their legs. Both lost both their legs, blown off by a rocket. It’s a miracle that either of them survived. But they both did. They were taken to the Army hospital in Donetsk, and 4 months later to hospitals in Russia. On December 22nd, they returned to Donetsk, their hometown. They brought new legs with them, and they’ve both had smiles on their faces ever since. Because they came back with new legs to kick some more fascist ass. That’s what they like to do. And they’re good at it…

[dropcap]G[/dropcap]rom and Shiba did not know each other before the war. Grom was a truck driver in Donbass, Shiba had businesses in Moscow, and had moved there. But as soon as the war in Donbass broke out, Shiba returned to Donetsk and joined the Army – Vostok Battalion and Essence of Time. That’s where he met Grom and Volga, the EoT Commander. They all became fast friends. Grom and Shiba worked together, and they were quite a pair, like Socrates and Hercules, and always with a smile and a joke. Even during some of the toughest fighting of the war, they were unstoppable and unflappable. A pair of super heroes, not like Batman and Robin, more like Batman and Superman.

Vostok and EoT worked at the airport in some of the hottest positions there. All of us who worked there faced death on a daily basis. (By Easter, EoT [a relatively small formation] had already lost 5 guys KIA.) But we all agreed that a prospect worse than death was to be gravely wounded. We all felt that way, but Grom and Shiba proved us wrong. Because they were gravely wounded, and they never showed a single second of self pity or regret. And now they’re back, not just in Donetsk, but in the Army, and they’re  going back to the Front, because even if they’re still getting used to their new legs, their trigger fingers work just fine. And they’re smiling all the way. Even before they got hit, they were always joking. It calmed the nerves of the civilian journalists that it was their main job to drive around through combat zones. And it came to them naturally. Even in the face of Death. 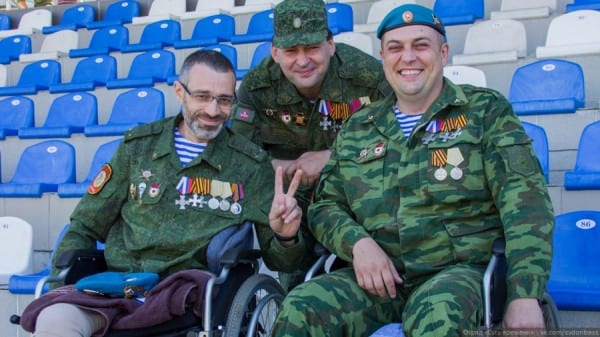 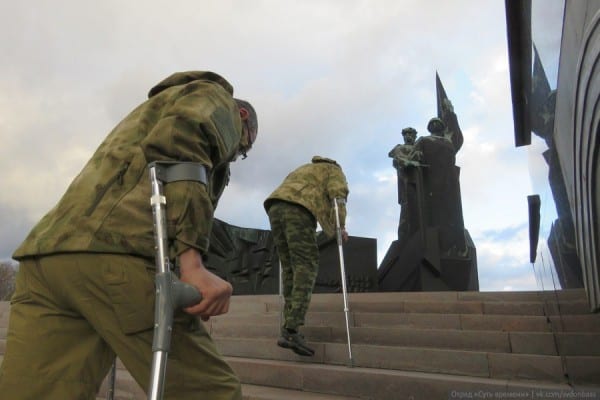 [dropcap]H[/dropcap]OW DO PEOPLE OVERCOME SUCH CHALLENGES, such tragedies? Well, it takes a strong and heroic nature, of course, but it is almost impossible to do without one other factor – a family that loves and supports you, and won’t let you down. And EoT and Vostok are a family just like that. A REAL family, not just a shared name or a shared Christmas dinner, or a phone call on your birthday. The Human Family, of which we can all be members, if we are willing to do our part. 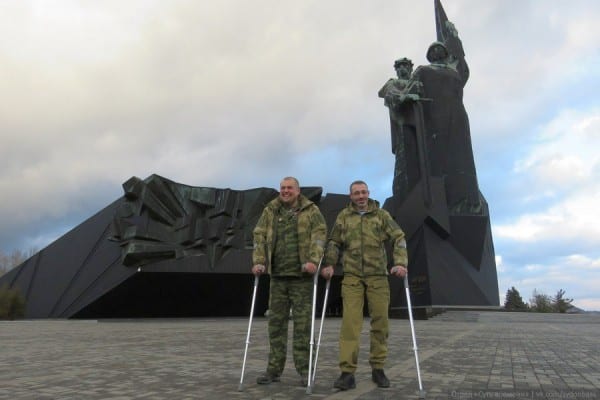 Grom and Shiba did theirs, and we weren’t about to let them down. Essence of Time, Vostok and friends raised over 1.5 million rubles for these guys, to help pay for care, medicine and prosthetics. But Grom and Shiba did not accept all of the donations for themselves, of course. They also sent some of the money raised for their treatment to wounded kids from Donbass who were also being treated in Moscow. Because what comes around, goes around, and that’s what Heroes do.
They know that, and so they do it. 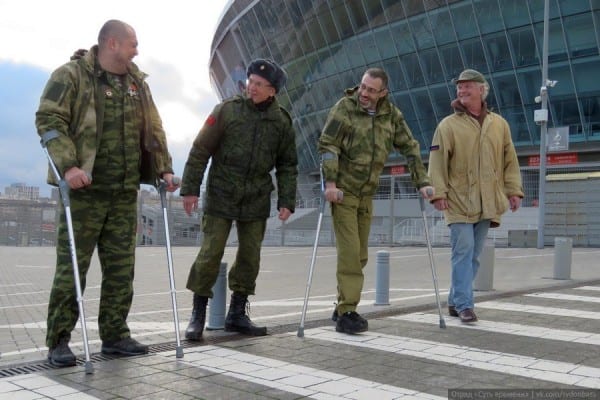 When they were recovering in Moscow, sharing a room, they had a lot of time to reminisce, and one day, trading childhood memories, discovered that one of Shiba’s grade school teachers, Svetlana Drouzhina, had later become a professor and taught Grom in university. Needless to say, when they got back to Donetsk from Moscow, they went to visit her. Imagine the pride she must have felt at seeing these two Heroes, whose magnificent characters she had helped to mold, show up to honor her and her students with their presence and their examples. It gives me goosebumps to even think about it. Men who risked everything to defend those who could not defend themselves, the innocent and the powerless, these men who said we will not just risk all and give all to protect you, we will win, we will protect you from those who menace you and want to enslave you, and we will defeat them. The US-backed fascists can shoot off our legs, but we will return to fight again, and as long as we are alive, we will continue to fight them, and we will defeat them, or die trying. The Nazis can kill us, but they cannot kill us all, so we can never be defeated. 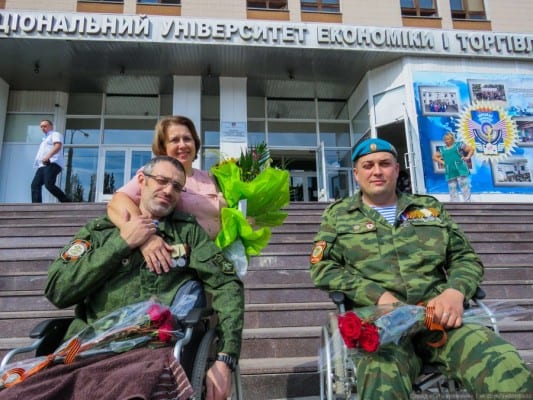 Grom, Svetlana and Shiba in Donetsk (Click on images for best resolution!) 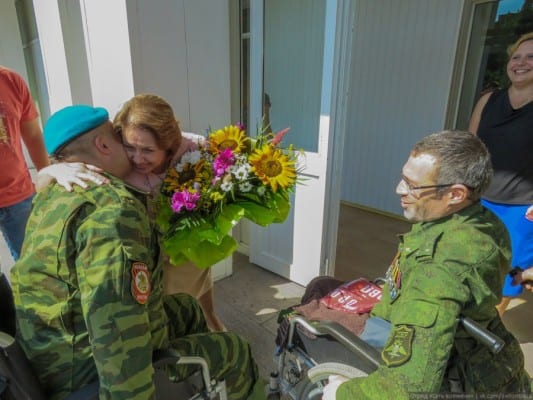 Shiba gives Svetlana a kiss on the cheek. 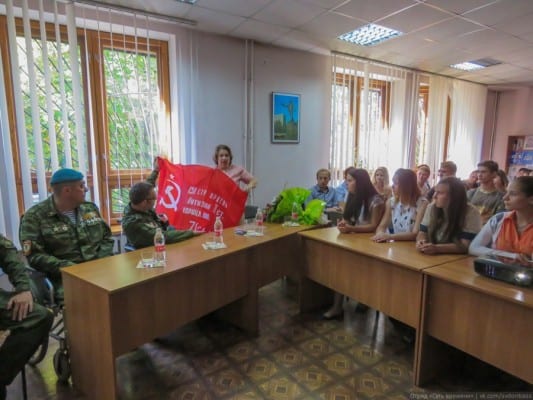 [dropcap]G[/dropcap]rom and Shiba gave a lecture on courage that should be taught in every school classroom in the world. Men who have had both their legs blown off defending a righteous cause have a right to say “I’ve done my share, I believe I’ll rest now.” Heroes like Grom and Shiba say “We are still alive, we can do more, so we will.” Because a Hero’s share is simply all he can give, and these guys still have more to give, and they will give it. Because that’s what it takes.

Those of us reading this today may die before the world goes through a horrific transformation as significant as the extinction of the dinosaurs.Then again, we may not. One thing’s for sure, the way things are going now, our children’s children won’t, unless we change things. Which is still possible, and Donbass proves it. Grom and Shiba prove it. We’re talking about the future of Humanity here. Our children. All children. You know what it’s worth to Grom and Shiba. What’s it worth to you? 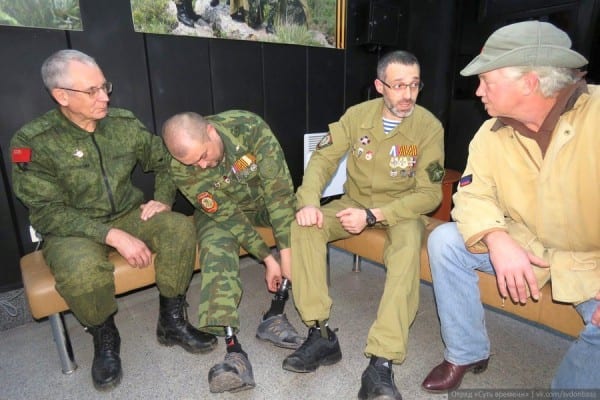 The author (r) with Grom and Shiba. 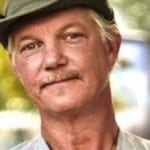 RUSSELL BONNER BENTLEY is a Senior Contributing Editor with The Greanville Post, Novorossiya Correspondent, in charge of Donbass Chronicles. Most of our editors and contributors are gifted in many areas, but few merit the label of “polymath” as richly as Russell,  nicknamed “Texac”. He has been called poet, musician, soldier, political activist, outlaw, smuggler, convict, fugitive, philosopher, lover, teacher and friend—and, indeed, he is all those things, but his course is always guided by an unswerving commitment to the construction of a better world in which peace, genuine freedom, and social justice reign supreme. A native of Texas, Russell joined—at the tender age of 54— the Novorossiyan Armed Forces (NAF) to fight what he sees as the attack on the Donbass people by an illegitimate fascist entity: the Kiev regime installed and supported by the US. READ MORE ABOUT TEXAC HERE

They Tell Us Nothing But Lies