Is it the gigantic bad Karma Americans carry? Or the guilt for being passive accomplices to the most murderous and hypocritical ruling clique in world history? Is it nothing more or less than the logical result of allowing capitalist values, social selfishness, to run amok?

At least 50 people were killed and more than 200 injured at the Route 91 country music event near the Mandalay Bay Hotel and Casino.

It is the deadliest mass shooting in modern US history, with the death toll surpassing the 49 killed at a nightclub in Orlando in June 2016.

Witnesses described seeing flashes of light high up in the tower of the Mandalay Bay Hotel and a sound "like firecrackers" as "clip after clip" was unloaded into the 40,000-strong crowd.

Paddock, a grandfather from Mesquite, Nevada, was believed to have been firing down at concert-goers from the 32nd floor.

A Swat team used a controlled explosion to enter the hotel room, where Paddock was found dead, according to a police statement. 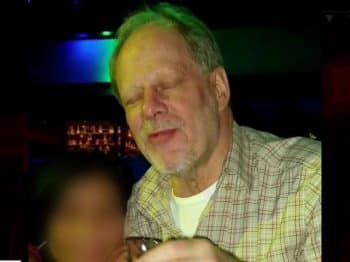 Paddok: What motivated this man? Given the corruption of the American media we may never know.

Announcing the suspect's name, Las Vegas Sheriff Joseph Lombardo said police had "located numerous firearms", including rifles, in the hotel room. A search of Paddock's house was due to take place shortly.

Sheriff Lombardo said Paddock was born on 9 April 1953, adding: "As far as history and background we haven’t completed that part of the investigation."

Police previously said they did not believe the suspect was connected to militant groups.

Records show Paddock lived in a three-year-old, $396,000 (£297,554) two-bedroom home in the small retirement and golf community of Mesquite, 80 miles north east of Las Vegas near the Arizona state border.

SIDEBAR
The attack at a glance
The suspected gunman behind the deadliest mass shooting in modern U.S. history was a 64-year-old Nevada resident who fired out of his room at the Mandalay Bay Resort and Casino before turning his gun on himself, police said. Las Vegas Police said Stephen Paddock was found dead when a SWAT team breached his room on the 32nd floor of the resort and casino, located across the street from the Route 91 Harvest Festival concert. He died of a self-inflicted gunshot wound just as police burst their way into the room, Las Vegas Metropolitan Police Department Undersheriff Kevin McMahill told the Las Vegas Review-Journal. Police found that Paddock was in possession of more than 10 rifles. Paddock checked in as a hotel guest on Thursday, Sept. 28 before the attack, which left at least 50 people dead and more than 400 injured, Clark County Sheriff Joseph Lombardo said.
Las Vegas gunman identified by police as Stephen Paddock

The suspect's brother, Eric Paddock, said the family was stunned by the news.

“We have no idea. We're horrified. We're bewildered and our condolences go out to the victims,” Eric Paddock told Reuters in a telephone conversation, his voice trembling. “We have no idea in the world."

Sheriff Lombardo said: "We are looking at in excess of 50 individuals dead and over 200 individuals injured ... Obviously this is a tragic incident and one that we have never experienced in this valley. My condolences go out to the loved ones."

At least two on-duty officers were also injured. One is in a stable condition after surgery and another sustained minor injuries. 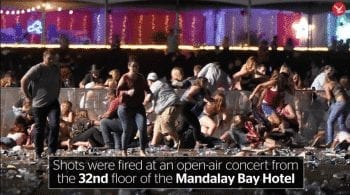 The FBI – including federal crime scene investigators – were assisting the Las Vegas police, Sheriff Lombardo said, adding:  "It is going to be a long and tedious investigation."

He said police had found a 62-year-old female companion of the shooter called Marilou Danley. They had launched a public manhunt for Ms Danley, but later said she was no longer a person of interest.

US President Donald Trump responded to the massacre on Twitter, saying: "My warmest condolences and sympathies to the victims and families of the terrible Las Vegas shooting. God bless you!" (Isn't that a laugh? The man simply epitomises the rotten, cynical and grasping values that make these killings inevitable—Eds.]

The suspected gunman behind the deadliest mass shooting in modern U.S. history was a 64-year-old Nevada resident who fired out of his room at the Mandalay Bay Resort and Casino before turning his gun on himself, police said. Las Vegas Police said Stephen Paddock was found dead when a SWAT team breached his room on the 32nd floor of the resort and casino, located across the street from the Route 91 Harvest Festival concert. He died of a self-inflicted gunshot wound just as police burst their way into the room

Did the CIA Use Gloria Steinem to Subvert the Feminist Movement?

Given all the guns owned by the vegas shooter, it would be of interest to know if he was a hunter…. It would not surprise me if at some point in his life he hunted animals for sport… Stephen Paddock was a White, Male, Christian… as such he may have been taught to hunt at some of the many christian youth hunting ministries that are grooming the future trophy hunters of america. The cost of teaching children to kill is great. It destroys empathy, the ability to sympathize with the suffering of other living beings. A child raised in this… Read more »

The media will go on and on about gun control, speculating whether the vegas shooter had mental disease issues, whether he had a grudge, whether he was a good guy who just flipped…. They will never say that he was a christian terrorist….

If he were muslim, no matter the underlying issues, he would be labeled a muslim terrorist.

Now we are being told that paddock was a gambler, a lone wolf…. maybe he just didn’t like country music!”

The media will say whatever it takes to admit the religious roots of this act of terror. Whether or not paddock was religious at this point in his life…. there is no doubt that he was influenced by the judeo.christian stance on justifiable violence.

Religions that inspires eternal terror over animals is on the path to destruction.