HELP ENLIGHTEN YOUR FELLOWS. BE SURE TO PASS THIS ON. SURVIVAL DEPENDS ON IT.
{Compilation and arrangement by the Editors}

UN Security Council - The Situation in Venezuela
(NOTE: Our special thanks to Denis Kucharski for his excellent contributions on our FB group page and his own.)

Dateline: January 26, 2019
The UN Security Council debates the criminal mess created by the US and its vassal states in Venezuela.

The Trump regime, no doubt reflecting a consensus in the top echelons of the US ruling class, is apparently.    recklessly engineering another Syria or Iraq tragedy in Venezuela, a conflict that could quickly engulf much of the.   American hemisphere, with incalculable costs to humanity, animals and the ecosphere, the ghastly price of all wars, doubly so.  when product of imperialist greed and unyielding thirst for global hegemony.

Below: Strong stomach required to listen to blustering sociopath Mike Pompeo hold forth about Venezuela's putative sins, and perorations by some delegates from complicit nations, such as Brazil, Argentina, et al. These Washington zombie regimes, run by puppets and Fifth Columnists, are a disgrace on the face of this hemisphere, but that's the verminous mob in which the empire thrives: among vendepatrias (look it up).

ADDENDUM
Oh, #Resistance, where art thou?
At a moment of genuine crisis, the brave opposition to Trump is nowhere to be found • #Resistance keeps mum, applauds Trump, or simply bloviates while brave activists like Codepink's Medea Benjamin show how it's done.

Betrayals by Democrats and fake socialists

[dropcap]W[/dropcap]e inspected the blogosphere looking for answers to this important question, and found few encouraging signs. Of all the media covering the Democrats and "progressive" field, only In These Times (ITT) came up with a noteworthy report, in fact one of the best. They took the subject on forthrightly and covered it with journalistic integrity. Below some excerpts from the piece filed by MARCO CARTOLANO.

Where Are Democratic 2020 Hopefuls on the Trump-Backed Coup Attempt in Venezuela? 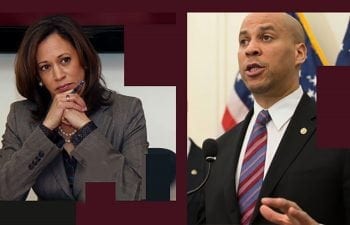 Harris and Booker: not a peep.

Of the major Democrats or progressives who have declared–or are expected to–only Tulsi Gabbard and Bernie Sanders have made statements. We will update the story if others speak out.

The Maduro government in Venezuela has been waging a violent crackdown on Venezuelan civil society, violated the constitution by dissolving the National Assembly and was re-elected last year in an election that many observers said was fraudulent. Further, the economy is a disaster and millions are migrating.

The United States should support the rule of law, fair elections and self-determination for the Venezuelan people. We must condemn the use of violence against unarmed protesters and the suppression of dissent. However, we must learn the lessons of the past and not be in the business of regime change or supporting coups – as we have in Chile, Guatemala, Brazil, and the Dominican Republic. The United States has a long history of inappropriately intervening in Latin American countries; we must not go down that road again.

Update: Presidential candidate and congresswoman from Hawaii, Tulsi Gabbard, declared Thursday on Twitter, “The United States needs to stay out of Venezuela. Let the Venezuelan people determine their future. We don't want other countries to choose our leaders–so we have to stop trying to choose theirs.”

The United States needs to stay out of Venezuela. Let the Venezuelan people determine their future. We don't want other countries to choose our leaders--so we have to stop trying to choose theirs.

Earlier: Every major Democrat or progressive who has declared—or is expected to declare—his or her candidacy for U.S. president has been silent in the wake of Wednesday’s announcement that President Donald Trump will recognize Venezuela’s National Assembly president Juan Guaidó as the interim president.

In These Times requested comment from Kamala Harris (D-Calif.), Bernie Sanders (I-Vt.), Kirsten Gillibrand (D-N.Y.), Elizabeth Warren (D-Mass.), Sherrod Brown (D-Ohio) and Cory Booker (D-N.J.)—but received no response. An email sent to Beto O’Rourke, a former Representative of Texas, bounced. Not a single top 2020 presidential hopeful on the Democrat side has released a statement—or even tweeted—about the development. 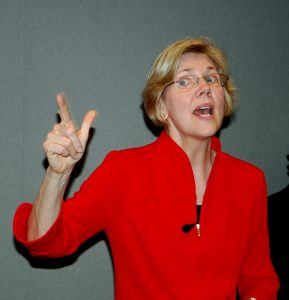 Trump called Venezuelan President Nicolas Maduro’s government “illegitimate” two weeks after Maduro’s inauguration for a second term. The declaration came after Guaidó swore himself in as president with the support of several right-wing governments in Latin America. The Lima Group, a coalition of mostly conservative-led Latin American countries, along with Canada, released a statement on January 4 denying the legitimacy of Venezuela’s May 2018 presidential election while recognizing the National Assembly as “a democratically elected constitutional body.” Secretary of State Mike Pompeo has participated in meetings with representatives of the Lima Group through video conference at least since last May. The developments, which are moving rapidly, are being denounced by some as a coup attempt.

Brazil, one of the group’s member nations, has ramped up its opposition to Maduro after far-right President Jair Bolsonaro was inaugurated at the start of January. Bolsonaro met with exiled Venezuelan opposition leaders and threatened Maduro that he would do “everything for democracy to be re-established.”  (Read on here)

Sanders will be Sanders

While some of what Sanders does in the public arena is no doubt of some benefit, like denouncing the government's troglodytic policy on the environment, getting "socialism" out of the forbidden lexicon, and making a stink on the minimum wages of America's bottom-rung workers (though pushing for a measly $15.oo while he could easily make a case for $25, with identical results), Sanders never misses a chance to take a cheap shot at Vladimir Putin. I guess it recharges his "establishment creds", but this only shows he fights like a mainstream liberal. (bolded ours). Regarding Venezuela, Sanders—a man who still does not convince us he has a very clear or principled picture of what US foreign policy is all about (he has said some pretty dumb things about Syria, for example, or Russiagate itself), or who, worse, knows quite well what's going on but goes along, came out with what we might charitably call equivocal statements, condeming in general and supporting Trump in the specific. As capable commenter Ben Norton put it, "Very bad statement. Disappointing."

.@SenSanders: "I think the time is long overdue for the American people to tell this president he is not a dictator, he is not a king, he is not the despotic ruler of Saudi Arabia, he is not his authoritarian friend Vladimir Putin of Russia." pic.twitter.com/qBUgqCi2ci

But we must learn the lessons of the past and not be in the business of regime change or supporting coups—as we have in Chile, Guatemala, Brazil & the DR. The US has a long history of inappropriately intervening in Latin American nations; we must not go down that road again. 3/3

The man giveth with one hand but he taketh with the other...is this what True Americans once called speaking with a forked tongue? 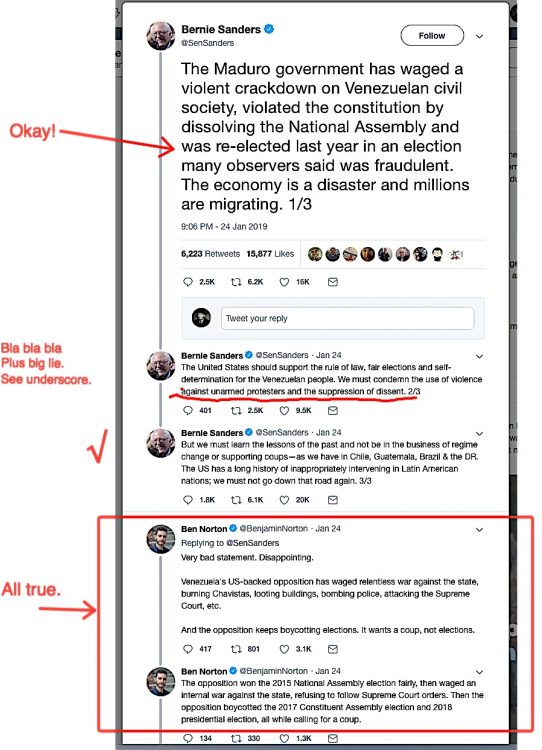 NOW SEE THE ABOVE MATERIAL IN LIVE TWITTER THREAD HERE

The Maduro government has waged a violent crackdown on Venezuelan civil society, violated the constitution by dissolving the National Assembly and was re-elected last year in an election many observers said was fraudulent. The economy is a disaster and millions are migrating. 1/3

Meanwhile, while the opportunistic "Never Trumper #Resistance" mob struggles to find its moral voice, across the Atlantic most of the abject European vassals get ready to endorse (Britain already did) Trump's lawless conduct in Venezuela. Expect in short order to see France, Spain, Germany—countries that keep lecturing the world about the rule of law, democracy, peace, non-intervention, etc.—and others across that continent, to join the US in its clearly wanton meddling in Venezuela, a step already taken by NATO member Canada, who recognised Guaido almost as quickly as the US godfather itself. Frankly, it does not get much more disgusting than that. The only good thing about this entire infamous affair is that such exhibitions of vile hypocrisy put more nails in the coffin of global neoliberalism and its squalid leadership, demolishing the malodorous conceits on which the West has claimed the right to rule the planet since it emerged from the earliest capitalo-feudal slime.