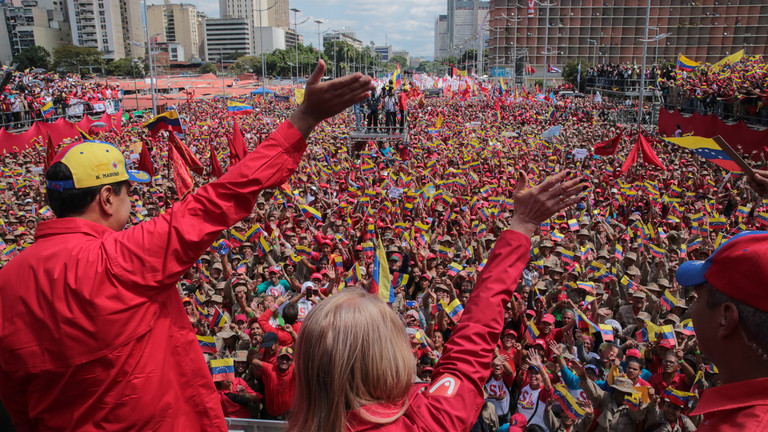 [dropcap]I[/dropcap]f you’ve been following Western media coverage of Venezuela’s crisis, you’ll know that a brutal dictator, whose socialist policies have ravaged the country, is clinging to power with an iron grip, as his people beg him to leave.

That’s the narrative that has been plastered across headlines and op-ed pages since US President Donald Trump intervened in Venezuela’s political crisis last month to call on “illegitimate” Venezuelan President Nicolas Maduro to step down, while declaring support for opposition leader Juan Guaidó, who ceremoniously declared himself the rightful president of the country.

Mere minutes after Guaidó announced himself as interim president, the Trump administration, in a very obviously coordinated moment, gave him its full backing and, sure enough, minutes after that, Western media followed suit.

Skeptics of US interventions around the world have noticed that this looks very much like the beginnings of another CIA-backed regime change operation – or, more plainly, a coup. Trump adviser and superhawk John Bolton openly admitted that Washington wants to get its hands on Venezuela’s massive oil reserves – and Trump himself has a history of advocating regime changes, but only if the US can “take the oil.” Documents published by WikiLeaks have also shown that, according to US State Department cables, “oil” is Washington’s number one priority in Venezuela.

What is the #1 U.S. interest in Venezuela? If the classified history of the U.S. State Department is a guide, oil. https://t.co/xCRNDT1oMF pic.twitter.com/8Z1e0IsKND

Yet, despite the fact that these smooth operators have admitted their ulterior motives not only in secret cables but out loud on television as well, the media is still clinging to the idea that Washington is involved in Venezuela’s crisis out of sheer good-heartedness.

Various political commentators and media figures have been attempting to point out the skewed nature of the coverage, but their observations for the most part have been relegated to social media, the place where inconvenient and contrarian views are still allowed to be aired (for now, anyway).

[dropcap]T[/dropcap]his week, photographs and videos appeared on social media showing a large pro-Maduro rally in Caracas. One of those who drew attention to the pictures was avid tweeter and former US Green Party candidate for president Jill Stein, who noted that the images don’t seem to match the popular media claim that all Venezuelans are unanimously “begging for foreign intervention.”

Of course, love her or hate her, Stein is correct. While the media typically speaks of “Venezuelans” as though they all share exactly the same political opinions and perspectives (wouldn’t that be called “racist” in other circumstances?) ...in reality, there is more than one side to the story. Unfortunately, however, since images of the pro-Maduro crowds would surely produce all sorts of uncomfortable cognitive dissonance among journalists and commentators, they naturally did what they do best and ignored them.

But pretending they don’t exist doesn’t make the Venezuelans who are deeply opposed to Trump’s interference just disappear. Even those who may not necessarily support Maduro aren’t all jumping for joy at the prospect of US intervention. According to polling data gathered before Trump declared support for Guaidó, 86 percent of Venezuelans said they were opposed to any potential US military intervention and 81 percent said they were opposed to US economic sanctions – but those numbers are unlikely to see the light of day on CNN, MSNBC or Fox News.

It’s all because of ‘socialism’

[dropcap]A[/dropcap]nother common media talking point has been that Venezuela is in crisis because of “socialism.” To put this in context, it’s important to understand that the US media harbors deep-rooted fears of socialism and commentators like to cite it as the be-all and end-all of the country’s economic crisis. While it is undeniable that there has been economic mismanagement by the Maduro government, blaming “socialism” as a kind of catch-all for everything that’s wrong with Venezuela is lazy.

We hear much less about US economic sanctions on Venezuela. Sanctions, which the US has steadily expanded, are portrayed by the media as a benign tool used to pressurize a government – when in reality those they hurt most are ordinary people. But that is the whole, unspoken aim of sanctions; strangling a country’s economy until the citizens revolt. Step two is for the US to then facilitate the rise of a neoliberal government, which would engage in a privatization blitz and open up access to Venezuela's vast natural resources to US corporations.

The US regularly uses certain types of economic sanctions as a cudgel targeting civilians in an effort to deprive, starve and kill people into submission. These can be more lethal than military action, yet are constantly painted as some benign alternative to force.

Alfred de Zayas, a UN rapporteur to Venezuela, has said US sanctions on Venezuela could amount to“crimes against humanity” and that there is a “direct nexus between sanctions and death” – but the media (and the UN itself) has ignored his 2017 report on the crisis and simply shelved it.

“They are only interested in a rapporteur who is going to…do grandstanding, is going to condemn the government and ask for regime change. And I went there to listen. I went there to find out what’s actually going on,” he told the Independent.

It’s an ‘organic uprising, not a coup’

For those who observed Western coverage of previous US interventions around the world (Iraq, Syria and Libya being three recent examples), the current reporting on Venezuela will come as no surprise: An evil regime, a suffering people – and the US, stepping in as the well-intentioned savior and bringer of freedom, as usual. It’s all a bit predictable at this stage.

The claim that Venezuela is experiencing an organic uprising of the people without influence from outside forces is as easily debunked as the idea that Trump has no interest in taking anyone’s oil – and it doesn’t take a rocket scientist to figure out. While the media has implied that the US government is simply swooping in to help clean up a crisis it had nothing to do with, reality is rather different. The US has been actively and covertly trying to destabilize Venezuela for many years, in the name of "furthering capitalism.”

I'm an expert on Venezuela and know Maduro very well. Venezuela needs change, the economic situation is devastating & unsustainable. No question. But a coup or regime change is not the answer. This sets a dangerous precedent for sovereignty. The US only wants Venezuela's oil.

No, it’s not a conspiracy theory, it’s all right there in black and white on an internal government document highlighted by WikiLeaks, which details how the US uses “financial weapons” and “economic warfare” to get what it wants from uncooperative governments. In plain English, the document states that the US “has a long history of conducting economic warfare valuable to any ARSOF UW campaign.” For the uninitiated, “ARSOF UW” refers to the ‘US Army Special Operations - Unconventional Warfare’ manual.

But again, there is little airing of any of these facts by the media. Instead, they continue to cheerlead Washington’s attempted overthrow of yet another government. Meddling in the affairs of foreign countries, it seems, is not such a terrible sin after all.

Strangely enough, as soon as there’s an opportunity for jingoistic op-eds and expert panels about freedom and democracy, the anti-Trump “Resistance” is suddenly full of praise for the Commander-in-Chief.

Danielle Ryan is an Irish freelance writer based in Dublin. Her work has appeared in Salon, The Nation, Rethinking Russia, teleSUR, RBTH, The Calvert Journal and others. Follow her on Twitter @DanielleRyanJ