HELP ENLIGHTEN YOUR FELLOWS. BE SURE TO PASS THIS ON. SURVIVAL DEPENDS ON IT.
Editor's Note: Marco Rubio, one of the proud architects of the current coup attempt against Venezuela once again proves he is nothing but an abject reactionary gusano.  Thank you for nothing Florida, for sending this repulsive psychopath to Congress. 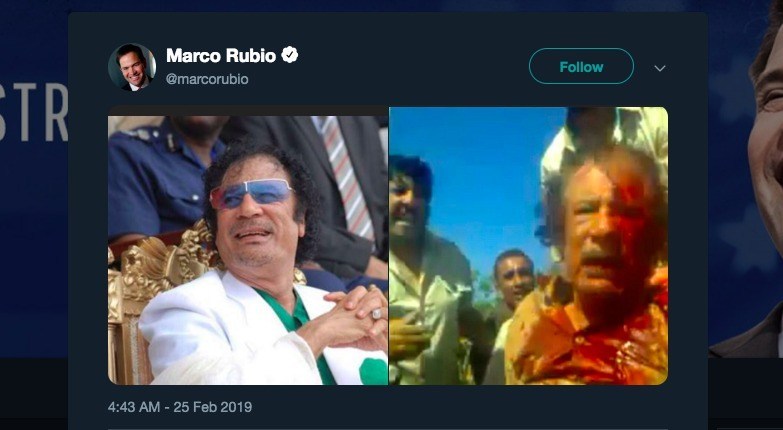 [dropcap]I[/dropcap]nfluential US Senator and 2016 presidential candidate Marco Rubio has tweeted a blatant death threat and incitement of violence against Venezuelan president Nicolás Maduro. As of this writing the post has 13 thousand shares and counting.

The tweet consists of a “before” and “after” photo of former Libyan leader Muammar Gaddafi, who in 2011 was mutilated to death in the streets following a US-led NATO intervention in Libya which was launched on false humanitarian pretexts. The first photo depicts Gaddafi alive and confident with a smile on his face, the second depicts him covered in blood following his capture by a militia group minutes before his death.

Senator Rubio has been Capitol Hill’s single most virulent advocate of US interventionism in Venezuela, and has been tweeting about it constantly. Since Washington’s bogus “humanitarian aid” delivery sparked violence on the borders of Columbia and Brazil, as it was intended to, Rubio has cranked his interventionist cheerleading up to eleven. The fact that Maduro would not allow a government that is openly staging a coup in Venezuela to hand a large unchecked delivery over to opposition factions within that very nation has been used to sell a narrative that Venezuela’s Evil Dictator is deliberately cutting off aid to a needy populace, which was of course planned. This narrative has been helped along by highly suspicious photo-friendly fires, and has been injected into mainstream consciousness with hysterical urgency by the likes of Rubio, Bill and Hillary Clinton, Dianne Feinstein, Bernie Sanders, Kamala Harris and the entire Trump administration. And it is completely false.

Firstly, Maduro is not refusing humanitarian aid for his people. Only an idiot would believe that the latest Official Bad Guy (who coincidentally happens to be sitting on top of the largest oil reserves on earth) is intentionally starving and depriving his people, and anyone who makes such claims should have to explain how they make that work in their minds. What’s the idea behind that, exactly? Is he starving them all and cutting them off from medical supplies because he hates them? Is he trying to kill everyone in Venezuela so that he can have the entire country to himself? Does he have some strange sexual fetish for the slow starvation of an entire citizenry? How specifically does this work?

In reality, Maduro has been accepting aid from everywhere except from the government that is openly staging a coup in his country in gross violation of its national sovereignty. Just last week Caracas accepted 933 tons of food and medical supplies from China, Cuba, India and Turkey, and Russia has shipped in 300 tons of aid on its own.

Secondly, the paltry $20 million in food, medical and hygiene supplies sent via USAID pales in comparison to the $30 million per day the new US oil embargo will be costing Venezuelans this year. If the US wanted to help the Venezuelan people, the best thing it could do is end its crushing economic warfare upon them, which experts say has made economic recovery all but impossible. Believing the CIA/CNN narrative that US sanctions only impact a nation’s leadership is dumber than believing that US bombs only kill bad guys; former UN special rapporteur Alfred de Zayas has said that US-led sanctions are killing Venezuelans and could be tried under international law as crimes against humanity. The best way for the US to help Venezuelans would be to cease all interventionism and end its economic warfare upon them.

Thirdly, there’s not actually anything stopping the US from giving the aid shipment it claims it wants to deliver to Russia, China, Turkey or India, for example, and having them deliver it. It could do the same with the UN or the Red Cross. There are many ways in which the US government which claims to care so much about the Venezuelan people could get its “humanitarian aid” to them which does not include highly provocative deliveries via military craft and aggressive stand-offs at Venezuelan border towns. The fact that Washington refuses to take those routes is an admission that the goal was always provocation and never humanitarianism.

Marco Rubio does not give a shit about the Venezuelan people. Like all Capitol Hill war whores, he only cares about advancing the hegemony of the US-centralized empire. Rubio endorsed the overthrow of both Gaddafi and Syria’s Bashar al-Assad in 2011; now half a million are dead in Syria as a result of the empire’s failed regime change intervention there, and the “humanitarian intervention” in Libya created a humanitarian catastrophe where people are openly sold as slaves.

“I was just in Venezuela where I heard many people voice fears that the US wants to turn their country into another Libya,” journalist Aaron Maté reported in response to Rubio’s tweet. “I’d say their concerns are well-founded.”

What Rubio is threatening/celebrating: "A mob grew around Gaddafi as he was frog-marched through the sand. While he was taken towards a group of rebel trucks, one fighter crouched in the dirt behind the frightened captive and sodomised him with a bayonet." https://t.co/2z4wcVWQvW https://t.co/tvam9KWraV

This is the face of the US regime change intervention in Venezuela, everyone. Donald Trump, John Bolton, Elliott Abrams, and a war pig senator who calls for the torturous lynching of the leader of a sovereign nation. Whenever someone supports any part of this coup agenda, this is the side that they are standing on. This is the flag that they are flying.

Everyone knows on some level that the US government has a consistent and indisputable track record of lying about the leaders of nations in geopolitically crucial strategic locations when they refuse to bow to the demands of US interests. No matter how many Venezuelans you tell me you’ve talked to, how evil you tell me Maduro is, how awesome you tell me Trump is, or how bad you tell me socialism is, this will still be true. And you know that it is true. Stop compartmentalizing away from facts you know to be true and turn and face the reality of what’s going on here.

APPENDIX
Meanwhile, the US media continues its campaign of lies and innuendo. Here’s another sample, by ABC News, one of America’s three major TV networks. The sensationalist headlines proclaim:

A human chain attempting to pass aid into Venezuela was broken up by tear gas.

(Such are the claims. But everything you see in this video has been staged and manipulated —”false flagged”—to support Washington’s phony narrative. This is all part of the American information war on Venezuela, laying the foundation for all-out attacks to topple the legitimate government of Nicolas Maduro. )