Venezuela's capable Foreign Minister Jorge Arreaza defending his embattled nation at the UNO. Venezuela is not being attacked solely by the Trump administration hyenas, but by a gang of Latin American traitors from Brazil, Chile, Colombia and other vassal states doing Washington's bidding.

A DISPATCH BY ERIC LONDON, FOR WSWS.ORG

[dropcap]T[/dropcap]his weekend’s attempt by the US to deliver “humanitarian aid” to Venezuela was a staged provocation, with flatbed trucks serving as US imperialism’s modern equivalent of the Trojan horse.

In Cúcuta, Colombia, and Pacaraima, Brazil, officials of the right-wing Colombian and Brazilian governments, operating under the direction of the Trump administration, attempted to move trucks carrying food and medical supplies across the Venezuelan border. Though the US and its regional allies knew the Venezuelan government would not allow entry, they encouraged supporters of self-declared Venezuelan “interim president” Juan Guaidó, a member of the far-right Popular Will party, to charge the reinforced border crossings. Four people were killed and dozens injured in the ensuing clashes.

From a political standpoint, the provocation was a failure. There were no mass crowds of Venezuelans cheering the prospect of intervention by the US and its far-right Colombian and Brazilian allies. There were practically no defections from the Venezuelan armed forces.

Independent aid organizations such as the Red Cross refused to participate in so naked a provocation. When British billionaire Richard Branson held a pro-Guaidó concert on the Colombia-Venezuela border Saturday, several headline performers simply refused to show up.

However, the central purpose of the operation was to create a pretext for military intervention. Those who joined in the provocation foreshadow what Trump and his regional allies have in mind when they call for bringing “democracy” to Venezuela.

Chilean billionaire Piñera celebrating his victory. A classical case of a filthy comprador leading a country back to US colonialism. Now working to stifle the Bolivarian revolution.

In attendance were Chilean President Sebastián Piñera (who last year repealed a law compensating victims of the dictatorship of Augusto Pinochet, with whom Piñera had declared his “solidarity”), Colombian President Iván Duque (political heir of ex-president Álvaro Uribe, whose paramilitaries killed thousands of innocent civilians in the crackdown against the Revolutionary Armed Forces of Colombia [FARC]), and representatives of far-right Brazilian President Jair Bolsonaro, an open defender of the Brazilian military dictatorship.

The Trump administration is using this weekend’s staged event to justify escalating its threats of war. The US puppet Guaidó tweeted Saturday that as a result of the border clashes, he wants the US and its allies to keep “all options open”—i.e., to prepare for a military invasion.

On Monday, US Vice President Mike Pence will travel to Colombia to join Guaidó and the leaders of the other Latin American countries, plus Canada, that have joined the so-called Lima Group of nations supporting Washington’s coup against the elected Venezuelan president, Nicolás Maduro.

There are now reports of US military activity in Colombia, where National Security Advisor John Bolton recently threatened to send 5,000 US troops.

US Secretary of State Mike Pompeo said Sunday that Maduro’s “days are numbered.” Florida Republican Senator Marco Rubio tweeted two photos side by side: one of former Libyan leader Muammar Gaddafi alive and one of his mangled dead body.

This Nazi-like threat, made in brazen violation of international law, is a warning of the level of criminality and devastation that will befall Venezuela in a US intervention. As the wars in Afghanistan, Iraq, Libya and Syria show, everything the US touches turns to rubble.

Venezuela is a country of over 30 million people and is among the most developed in Latin America, with 88 percent of its population living in urban areas. 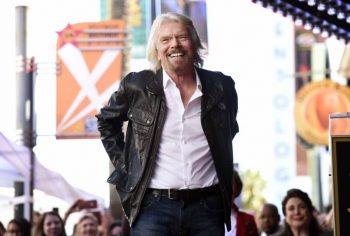 Driven by class interest solidarity with the global bourgeoisie, obnoxious billionaire egotists like Richard Branson are helping to push Venezuela off the cliff.

The US faces the prospect of military catastrophe in Venezuela, following its debacles in the Middle East and Central Asia. After 17 years of fighting poorly armed militias in the Afghan mountains, the US has suffered a humiliating defeat. Washington’s main condition of withdrawal there is that the Taliban agree to negotiate with its puppet government.

Venezuela, on the other hand, has an army with 350,000 soldiers on active duty and 2,000,000 in reserve. It operates advanced Russian-made weapons systems, including S-300VM anti-missile and Buk anti-aircraft devices. Unlike any of the countries the US has invaded in recent decades, Venezuela also has a functional Air Force, featuring fleets of US-made F-16 and Russian-made Su-30MK2 fighters.

A war would throw the entire region into chaos. There would be intense popular opposition to imperialist intervention. Millions of refugees would flee Venezuela, traveling up the Isthmus of Panama and through Central American countries already ravaged by gang violence, poverty and record levels of inequality. A migrant traveling to the United States would have to travel over 3,000 miles across eight national borders. Flotillas in the Caribbean will sink. Thousands will die in a desperate effort to save their families.

[dropcap]T[/dropcap]here is a possibility that a US intervention would involve a clash with Russia, another nuclear-armed power. There are a substantial number of Russian nationals working in Venezuela’s oil extraction industry. US Naval Commander Craig Faller told the Voice of America earlier this month that the US military is preparing for a possible conflict with Russia in what Faller called “our neighborhood” of Latin America. It is also possible that Nicaragua and Cuba would become involved in fighting, drawing the entire hemisphere into war.

Washington’s humanitarian pretensions in seeking regime change are a transparent fraud. Yankee imperialism wants to grab Venezuela’s oil—the largest proven reserves in the world. Last month, National Security Adviser John Bolton told Fox News: “It will make a big difference to the United States economically if we could have American oil companies invest in and produce the oil capabilities in Venezuela.”

There is virtually no opposition within the US political establishment to the Trump administration’s reckless provocations. On the contrary, the corporate media was full of stories expressing shock that Maduro would use tear gas at the border and ban border crossings. There was no mention that the Venezuelan military’s tactics against right-wing thugs storming its borders resembled the methods used by the US border patrol against defenseless women and children seeking to exercise their right to apply for asylum.

Most telling is the response of the self-styled “left wing” of the Democratic Party, which has lent legitimacy to Trump’s threats. Senator Bernie Sanders, who announced his candidacy for the Democratic Party’s presidential nomination last week, tweeted Saturday: “The people of Venezuela are enduring a serious humanitarian crisis. The Maduro government must put the needs of its people first, allow humanitarian aid into the country and refrain from violence against protesters.”

New York Congresswoman Alexandria Ocasio-Cortez, who told reporter Max Blumenthal in early February that she was “working on a response” to US war threats against Venezuela, has not issued a public statement since then.

In his fascistic speech in Miami last week, Trump declared, “The twilight of socialism has arrived in our hemisphere.” The administration’s war threats against Venezuela serve a dual purpose. The US ruling class is demanding the total subjugation of Latin America and free reign for American corporations over the exploitation of the region’s workers and resources.

At the same time, Trump’s Nazi-like attack on socialism is directed against the working class in the US, which is becoming increasingly defiant, as the growth of strike activity shows. Interest in socialism is growing among workers and youth. By identifying socialism with the social disaster produced, in part, by the anti-socialist, bourgeois nationalist policies of the Maduro government, the American ruling class hopes to slander socialism and counter the threat of revolution by preparing mass repression at home.

The threat of a disaster of world historic proportions looms as the US moves toward war in Venezuela. Stopping the Trump administration’s war plans requires the mobilization of US imperialism’s greatest enemy: the American and international working class.

ABOUT THE AUTHOR
The author is a senior editor with wsws.org, a Trotkyist site. While we obviously agree with much of his customarily lucid analysis, we strongly disagree with the Trotkyist propensity to denigrate as "not socialist enough" any country in the claws of the US imperialist beast which fails to meet their definition of socialism. In that sense, they void much of their own anti-imperialist message by resembling liberals who can never denounce US imperialism without denouncing the victim as equally foul.

The Jussie Smollett controversy: Must all accusations be believed?