Univision Presstitute Jorge Ramos tries to frame Maduro and gets thrown out. 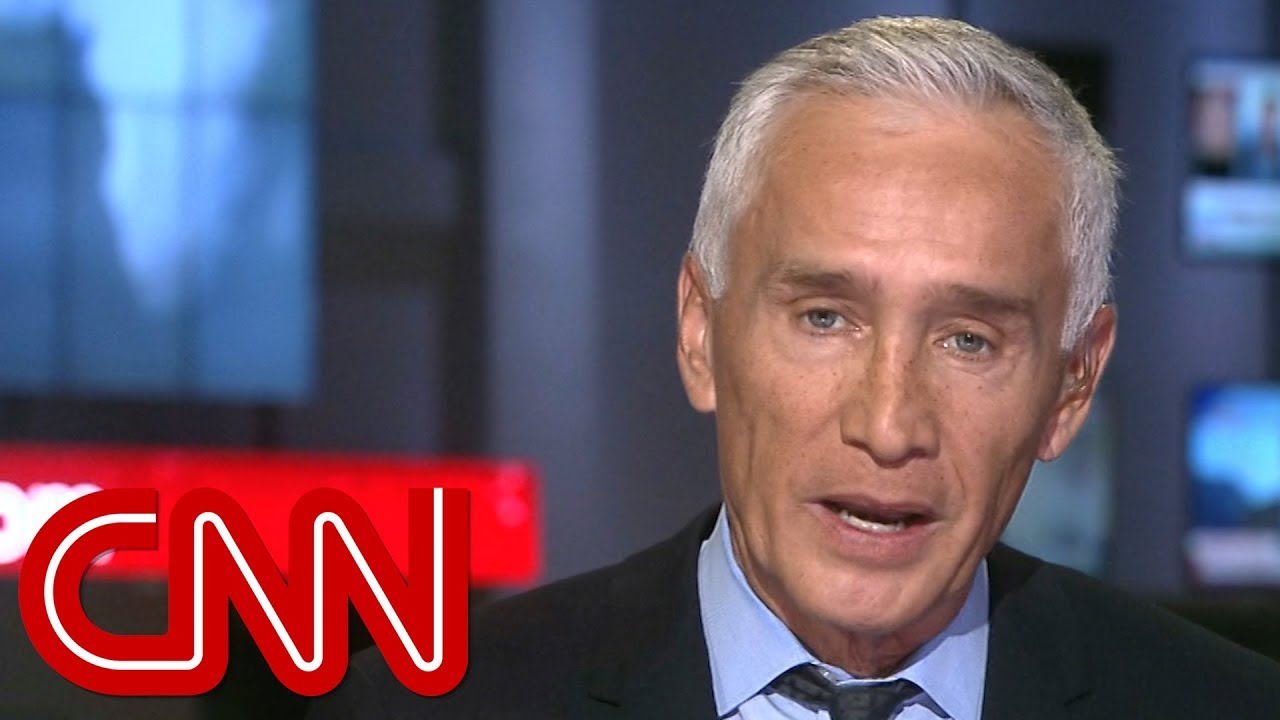 [dropcap]W[/dropcap]hiny Jorge Ramos, a well known imperial journo described by CNN/CIA asset Anderson Cooper as "a senior veteran journalist" attached to Univision was recently thrown out of a press interview with Venezuela's president Nicolas Maduro, as Ramos, true to his longstanding practice, had gone to Venezuela to gather tendentious material to use against the Bolivarian government. On this CNN video (CNN is one of the leading US channels beating the drums for the toppling of Pres. Maduro) he is crying foul and hysterically denouncing Maduro as "a dictator" for the benefit of the plutocracy he so loyally serves, a defining feature of his long career in Spanish language channels.

Mexican-born Ramos wants us to believe (and so he says in the interview with Cooper) that while he was admittedly a bit confrontational with Maduro—holding his feet to the fire so to speak—he was merely acting as a tough journalist, but that is not at all what Ramos does and was doing. In the guise of interviews, Ramos in fact specialises in hostile, real-time propaganda toward political figures the empire or the "Deep State" has put in its crosshairs.  He tried years ago the same ruse with Bolivia's Evo Morales, and Evo, quickly seeing through his dishonesty, also kicked him out. (See Appendix) 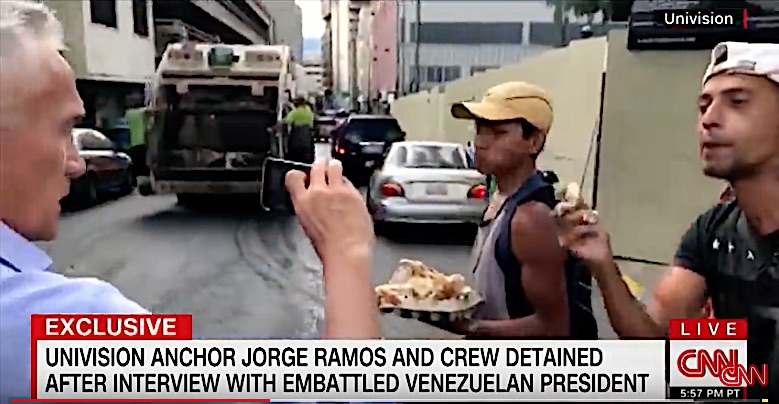 Ramos filming Venezuelan youths supposedly eating refuse from a garbage truck out of desperation. (The US media accuses the Maduro government of all sorts of crimes and sins, including gross mismanagement of the country, but they never mention the huge damage done to society and the economy by America's completely illegal sanctions.

Wikipedia calls him "The Walter Cronkite of Latin America", which says a great deal about the pathetic standards of American journalism and how the establishment sees its servile personnel, but that's another story. (Wikipedia).

Much is being made on US media and affiliated channels of Ramos' team being unceremoniously deported from Venezuela, treating the incident as if some nuns had been raped, or minors molested, but those who understand the situation for what it is perfectly agree with the actions of the Venezuelan government. This act was in fact long overdue. In the global information war dominated by US media and its numerous allies, the Univision and Telemundo cadenas, owned by big capital inimical to any revolutionary process, play an important role in brainwashing the Latino public. This is the natural turf occupied by vile journos like Jorge Ramos.

Pres. Maduro and his people are by now well aware of the role played by "the free press" (and the equally counterfeit Western NGOs) in the hybrid war against the Bolivarian project. Their unrelentingly mendacious behaviour has permitted the American ruling cliques and their allies to manufacture all the necessary pretexts to inject American power nakedly in the region and advance the regime change moves required to take over Venezuela and turn back the clock to the sunny days of unrestrained capitalism and unimpeded imperialist exploitation.

Ramos being expelled from a Trump press conference. In this case he irritated The Supreme Narcissist with some petty questions designed to put him on the spot in connection with his racist utterances about illegal immigrants (Aug. 25, 2015).  This was part of Ramos' role as member of the liberaloid never-trumper crowd defining (aside from Fox News and other right-wing channels) the posture of most of the corporate media. Opposing Trump's racism and lies about Mexican or Latin immigrants is always good, but not when this is used to serve the sordid and hypocritical agendas of the Democrat party and its Deep State handlers.

If you know the political syntax used by the US media—always shilling for the super rich over the poor, and cheering for the empire even when the latter is engaged in Nuremberg-class crimes— it is possible to decode their dispatches rather easily, as their spin on major political topics is fairly predictable and rarely varies.

[dropcap]A [/dropcap]close look at this passage in a Reuters dispatch (Univision team deported from Venezuela after Maduro interview) describing the Ramos incident bears this out. You will see that while Reuters tries to make it sound like a desecration, Caracas is justified in viewing most foreign corporate media with great suspicion if not outright hostility, as you would if faced with people determined to do you harm. The text reveals how devious and subtle the embedded lies are, often transmitted by context omission, half truths, and innuendo (an old technique), and how hopeless it is to expect the ordinary citizen to detect them. So here's our in-line dissection. (Our commentary is in bold red).

Information Minister Jorge Rodriguez said on Monday the government had previously welcomed hundreds of journalists to the presidential palace, but it did not support “cheap shows” put on with the help of the U.S. Department of State.  [Minister Rodriguez is absolutely correct.]

Ramos, a veteran anchor born in Mexico, told Mexican broadcaster Televisa that Maduro became annoyed when they showed him a video of young Venezuelans eating from a garbage truck, a sign of widespread food shortages across the country. [Ramos was quite probably trying to set up and provoke Maduro with some footage of unverified provenance, and quite likely manufactured for the purposes of this phony interview. This is classical—and easily produced— false flag material by the empire, which has become quite adept at creating entire false storylines with the help of film producers, "crisis actors", and so forth.]

Maduro faced regional condemnation this week after his security forces violently drove back opposition attempts to bring in foreign aid. [This is a lie spread by the US/NATO media.]

He is facing his biggest political crisis since he replaced Hugo Chavez six years ago, after rival and congress chief Juan Guaido last month invoked the constitution to assume an interim presidency, arguing Maduro’s re-election was fraudulent. [Reuters makes it sound as if Guaidó was more prominent in the country's politics than he is, and the whole passage is written to lend credence to the notion—totally false—that Maduro's recent re-election was fraudulent. Again, classical case of the Big Lie—repeat something often, from every nook and cranny, and people will swallow it.]

Venezuela’s socialist government has long had a tense relationship with Western media, which it largely considers hostile and in league with “imperialist” interests.  [Note how Reuters deliberately casts doubt where there should be none. The role of Western media as all-out champions of Washington's imperialist wars and adventures, their subservience to State Department narratives against targeted nations is by now amply demonstrated. Independent nations such as Iran, Russia, China, Venezuela, etc., have been and will continue to be demonised and slandered by the US/NATO media because that is their precise assignment in the panoply of tools and weapons used by the empire to subjugate and defeat those who reject and oppose its hegemony. Note further, that, as is customary, the word "imperialist" is placed in quotes to signify again "doubt" or some type of hyperbolic expression.]

Short detentions and deportations have become common, especially as reporters facing delays for official permissions seek shortcuts to report in Venezuela.  [This is also a wild and tendentious exaggeration.]

At least seven foreign journalists who flew in to cover Venezuela’s political turmoil were briefly detained in January.

The Venezuelan media trade union said at least 30 journalists and workers for media outlets were detained in the first two months of 2019. [In a nation as severely infiltrated by US soft power agents, and fighting for its life, detention, when indicated, should be regarded as elementary prudence. It is also perfectly within the rights of a sovereign state. Furthermore, the legality of ANY detention, in Venezuela, Britain or the US, etc., is a matter for specific examination. Generalisations and claims of this sort in a world in which the chief lawbreakers of international and domestic laws are found in the US, Britain, France and their ilk, is the height of hypocrisy. Lastly, since the Venezuelan media is still almost 75% owned and controlled by private, capitalist interests aligned against Maduro, who are these "trade unionists"? There is no explanation about what kind of union they represent, and that, in itself, is a question worthy of further scrutiny.]

APPENDIX
It happened with Evo, too.

[dropcap]T[/dropcap]his is not the first time Ramos, a shill for the global plutocracy, has been thrown out of a press conference for openly rude or tendentious behaviour. As shown above, he was expelled from a Trump press conference in late 2015, during the runup to the 2016 election. Again, while herdlike, sheepish timidity and corrupt deference to power characterises the behaviour of most corporate journos, Ramos' antics do not represent the opposite, but another form of journalistic malpractice. This ambush, in the guise of interview, took place in La Paz, in February of 2006. It illustrates the Ramos method.

In the "truncated interview" Ramos pretends to teach Evo what real democracy means (US-style elections, etc.). Probing the profound respect that Evo Morales had manifested toward Venezuelan leader Hugo Chavez and Fidel Castro, Ramos tells Evo impudently that "many feared that his rule might look like Chavez' 'authoritarianism'," or Fidel Castro's "dictatorship." "You have said that you admire Fidel Castro?", he intones suggestively. Please answer yes or no. Such questions were highly conducive in substance and tone to disagreement, and could legitimately be viewed as a calculated insult. Evo, a self-assured man, was not about to let such provocations roll off without a forceful response, and knowing well who Ramos was and who had sent him, quickly terminated the exchange.  It is clear that Ramos, sneaky but obviously not very smart, and certainly a man who long ago sold off his dignity and self-respect, tried the same stunt in Caracas and obtained the same result, something which, as planned, no matter how the "interview" went, would be used to denigrate the targeted revolutionary leader.

ABOUT THE AUTHOR
Patrice Greanville, a founder of Cyrano's Journal, America's first radical media review, is the founding editor of The Greanville Post.

DEJA VU ALL OVER AGAIN: The Venezuelan comfortable classes beg for foreign intervention