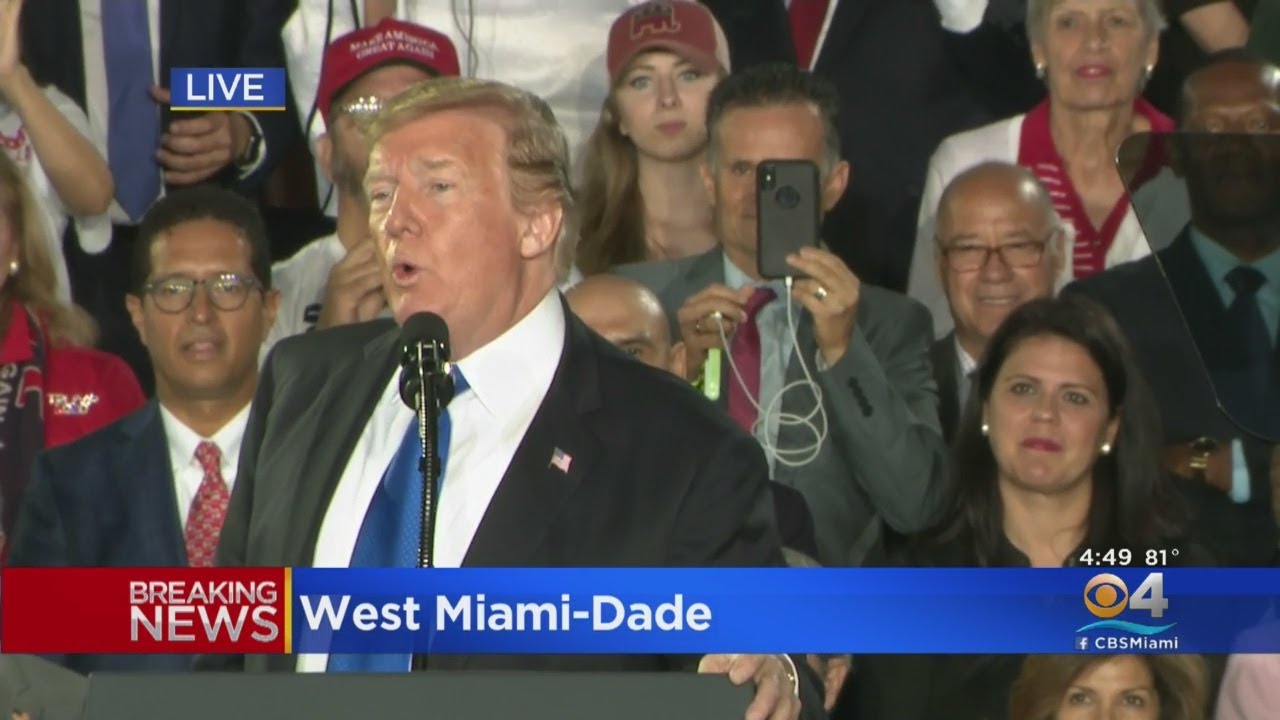 [dropcap]I[/dropcap]t may seem oxymoronic, but President Trump is living proof that lunatics can think big. Not content with “only” threatening regime change in Venezuela, the American leader is expanding his mission to rid the Western hemisphere of socialism, with Cuba and Nicaragua next in line for US “salvation”.

In a particularly unhinged speech last weekend in Miami, Florida, (see above) Trump declared Venezuelan President Nicolas Maduro a “Cuban puppet” and “failed dictator”. Trump denounced socialism with a verve that has not been heard from a US president since the depth of the Cold War more than 30 years ago.

“In Venezuela, and across the Western hemisphere, socialism is dying and liberty, prosperity and democracy are being reborn,” said Trump inferring the “Troika of Tyranny” that his national security advisor John Bolton – another lunatic – previously coined to describe Venezuela, Cuba and Nicaragua.

The Miami Herald reported Trump’s speech as a “harbinger” for regime change in the three Latin American countries.

Trump’s claim of “democracy being reborn” is a bit hard to take at a time when this president is declaring state-of-emergency powers at home to push through his faltering border wall “vanity project”. Dozens of US states are suing Trump for “presidential over-reach of executive powers”. Constitutional scholars are warning of an incipient shift to fascism under Trump.

The criminality of the occupant in the American White House is astounding. The brazen threat of aggression against another nation – as well as implicitly against Cuba and Nicaragua – is on par with the fascism of the 1930s leading up to World War II.

For Trump to then proclaim he is spearheading freedom and liberty for the entire Western hemisphere is a foreboding sign that his megalomania is spectacularly out of control.

The prospects of the US military fighting a war in Venezuela, let alone Cuba and Nicaragua as well, are in the realms of impossible fantasy. But with this Commander-in-Chief the fantasy is being entertained.

Trump in his Miami speech delivered a mafia-like ultimatum to the Venezuelan military. Either it supports the US-anointed minor opposition figure Juan Guaido who declared himself “acting president” of Venezuela almost a month ago, or the armed forces face obliteration, said Trump.

With the tone of an organized crime boss, Trump warned that Venezuela’s defense forces were “risking their lives” by supporting the “failed dictatorship” of  “former” President Maduro. “If you choose this path, you will find no safe harbor, no easy exit and no way out. You will lose everything,” added Trump.

In response, President Maduro slammed Trump for his “Nazi-like speech” and for daring to threaten his country’s military with annihilation if it does not submit.

The criminality of the occupant in the American White House is astounding. The brazen threat of aggression against another nation – as well as implicitly against Cuba and Nicaragua – is on par with the fascism of the 1930s leading up to World War II.

The flying in of US military cargo planes to Colombia and Brazil purportedly laden with food aid for Venezuela is a flagrant cover for mounting an armed incursion. In close coordination with the CIA-groomed opposition figure Juan Guaido, the US is contriving a deadline of this weekend for the aid supplies to be allowed entrance into Venezuela.

President Maduro is refusing to permit the US material into his country. Venezuela’s armed forces are resolutely in support of the government in Caracas and therefore can be counted on to block any attempt to force the US aid across the borders from Colombia and Brazil. The impasse may, however, provide pretext for US military intervention.

The impending crisis whipped up by Trump with Venezuela seems insane. The South American country may be in economic turmoil, but it is hardly a humanitarian catastrophe meriting such drama. Besides the turmoil has largely been instigated by Washington slapping sanctions and asset freezes on Venezuela’s lifeline oil economy. If the US were to lift its illegal sanctions on the country then much of the chaos would subside.

For the Trump administration to declare a minor opposition figure as the “recognized president” of Venezuela is an audacious violation of international law and norms. Shamefully, several European states have sought to legitimize Washington’s subversion in Venezuela.

Of course, subverting the socialist government of Nicolas Maduro has the all-important prize of allowing US capital to get its hands on Venezuela’s colossal oil wealth.

Another motive is to eradicate any “threat of good example” in Uncle Sam’s presumed backyard. If Venezuela can be subjugated, then the Trump administration has Nicaragua and Cuba next in its cross-hairs for regime change. There is also the benefit of suppressing any political opposition domestically within the US, with a campaign against socialism in the Western hemisphere used to smear emerging socialists at home.

Still another motive for Trump is to desperately find a patriotic purpose with which to mobilize his support base. Despite his blustering campaign promises, Trump has delivered very little to his voters over the past two years. With his 2020 re-election bid in sight, Trump’s faltering border wall project is perhaps the most embarrassing failure. Not able to deliver on his “vanity project”, Trump is casting around for an alternative cause célèbre.

“Fighting socialism” in Venezuela and elsewhere in the Western hemisphere is Trump’s next star-turn. But how absurd can it get? Trump is presenting himself as more messianic than Cold War hawks in Washington during past decades when they could at least plausibly invoke Soviet expansionism as a propaganda threat.

Trump’s lunatic demagoguery is going big – off the rails.

ABOUT THE AUTHOR
Finian Cunningham is a former editor and writer for major news media organizations. He has written extensively on international affairs, with articles published in several languages.

Final Steps of the Multipolar Revolution: Containing the US in Europe