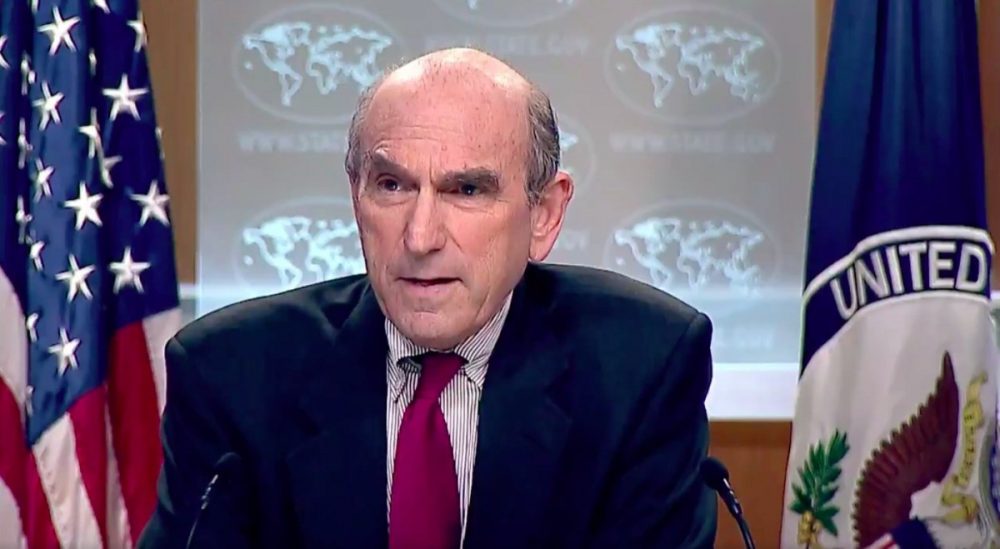 [dropcap]S[/dropcap]o, you might want to sit down for this, but believe it or not it appears that the US government is using the fallout from its “humanitarian aid” performance to justify further sanctions against the Venezuelan government.

I know, I know. I’m just as shocked as you are.

“This action, taken pursuant to Executive Order (E.O.) 13692, targets six security officials who control many of the groups that prevented humanitarian aid from entering Venezuela, thereby exacerbating the humanitarian crisis that has left millions of Venezuelans starving and without access to medical care under the Maduro regime,” reads a statement from the US Treasury, if you can imagine such a thing.

“Those who continue to support a dictator that violates human rights and steals from the starving should not be allowed to walk around with impunity,” tweeted US National Security Advisor John Bolton of this latest escalation, to everyone’s breathless astonishment. “The United States will continue to take appropriate action against Maduro and those aligned with him.”

“The United States urges all nations to step up economic pressure on Maduro and his corrupt associates, as well as restrict visas for his inner circle,” US special envoy to Venezuela Elliott Abrams told a room full of stunned, slack-jawed reporters, adding, get this, “Now is the time to act in support of democracy and in response to the needs of the Venezuelan people.”

Let’s all take a moment to collect ourselves after receiving this shocking, shocking, astonishing news. If you are hyperventilating, I recommend breathing into a paper bag and envisioning yourself strolling on a tropical beach arm in arm with a Berlin-era David Bowie.

As it turns out (and who could have predicted this?), all that posturing by the United States government about “humanitarian aid” seems to have been a cynical ploy to further escalate against the Venezuelan government, which has been a longtime CIA target for regime change ever since President Hugo Chávez took office in 1999. It may be time to face the cold, stark possibility that, as hard as it is to fathom, the government of the United States of America is interested in Venezuela not for humanitarian reasons at all, but because it has the single largest proven oil reserves of any nation on the entire planet.

After all, if the US were so keen on getting its $20 million of humanitarian aid to the people of Venezuela, it could simply have given that shipment to one of the many nations that Venezuela is currently accepting aid from like Russia, China, India, Turkey or Cuba to deliver instead of instigating a hostile stand-off on Colombian and Brazilian border towns. Or, rather than demanding that a literally besieged government passively allow large, unexamined shipping containers to be delivered by the government orchestrating that siege into the hands of the Venezuelan faction that is collaborating with it, they could simply have given that shipment to the UN or the Red Cross for delivery. But rather than taking those extremely easy and diplomatically simple measures to deliver its relatively small amount of humanitarian aid to the Venezuelan people, the most difficult and provocative path was deliberately taken instead, with some extremely suspicious activity leading to the delivery being set fire to by anti-Maduro protesters.

Could it be (and just bear with me here while I spitball) that the Trump administration officials who engineered this media-friendly humanitarian aid performance like Elliott Abrams, John Bolton and Mike Pompeo knew all along that the Venezuelan government would necessarily turn away the delivery under the spotlight of international news media? Could they have known that Abrams’ already established history of using humanitarian aid as a pretext to ship weapons to oppositional militia groups would make it impossible for Maduro to permit such a delivery? Is it possible that they knew that the official US State Department narrative about this rejection would be uncritically regurgitated verbatim as absolute fact by the news media outlets of the US-centralized empire, as such events consistently are?

I know it sounds crazy, but might it just possible that all this Venezuela business is actually about resource control and regional dominance in a strategically crucial location which might otherwise favor US geopolitical opponents like Russia, China and Cuba? What if the US government and its tight empire-like international alliance uses its massive power advantage to bide its time slowly squeezing noncompliant nations into submission using economic sieges and covert disruption operations by intelligence agencies, while manipulating the public narrative to ensure the complicity of the international community, until those noncompliant governments collapse under the pressure and either join the empire-like alliance or plunge into chaos which can be easily capitalized upon? Could it be that this is all just a ploy to shore up control of world affairs by a dominant group of extremely powerful corporate and financial manipulators who exert immense control over political and financial systems, markets, non-government organizations, opaque government agencies, and media around the world?

ABOUT THE AUTHOR
Caitlin Johnstone is a brave anti-imperialist journalist. She describes herself as: Rogue journalist. Bogan socialist. Anarcho-psychonaut. Guerilla poet. Utopia prepper. Proudly 100 percent reader-funded through Patreon and Paypal. Much work done with assistance from soulmate/brother-in-arms/co-conspirator Tim Foley. Read Caitlin’s articles on Medium here or on Steemit here, follow her on Twitter here, and follow her on Facebook here. You can also subscribe to this website’s mailing list here. If you would like to support Caitlin, you can share her articles around, buy her book, or throw some coin in her hat on Patreon or Paypal.