How Russiagate Has Turned Progressive Truth-Tellers Into War Narrative Enforcers

Russiagate is an example of the Marxist concept of false consciousness, where the ruling class throws the people diversions so that they’ll see themselves as properly informed while they’re actually fundamentally unaware of the forces which shape society. It’s gotten many left-leaning Americans to commit to a narrative that they believe can bring about the downfall of a corrupt president and restore [a mythical] integrity in our political system, but that’s only worked as a way to enforce the agenda of American imperialism.

What’s fascinating is the transformation that these left-leaning figures have undergone as the Russia narrative has influenced their lines of thinking. One example is the case of the cartoonist Dan Perkins-pen name Tom Tomorrow-whose skepticism of the corporate media and the intelligence community has greatly softened since Russiagate got going three years ago.

Like anyone with integrity, Perkins opposed the Bush administration’s Iraq WMD narrative from the start. In a comic from 2015, Perkins portrayed the intelligence agencies’ WMD claims as a floating supernatural brain that convinced spellbound American leaders into invading Iraq. “Clearly we must support the administration as it reluctantly embarks on this carefully considered path,” a cartoon Hillary Clinton and John Kerry said in one panel as the brain floated above their heads. “Given what The Intelligence has revealed-what choice do we have?” 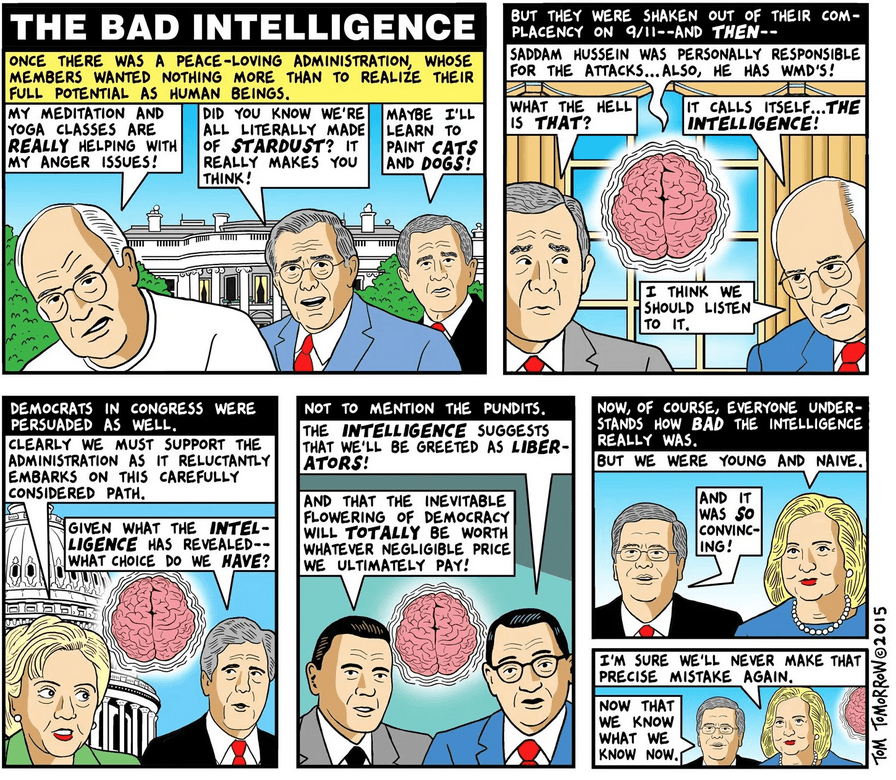 Since then, Perkins has become similar to his caricatures. Even after forensic data has come out which shows WikiLeaks couldn’t have gotten the DNC emails from Russia, evidence has been found that shows reports relating to the Guccifer 2.0 persona were deliberately manipulated to include Russian metadata, and numerous other holes in the claims of Russian interference have appeared, Perkins has stuck with the line about how Russia “hacked the election.” Perkins’ cartoons may sometimes ridicule the more conspiratorial strains of Russiagaters, but it’s been disingenuous for him to continue with the standard model of Trump-Putin jokes without so much as questioning that U.S. intelligence agencies have told the truth about Russia.

It’s also been harmful to world peace, despite Perkins’ relatively minor presence in mainstream discourse. The narrative that Trump is Putin’s subservient stooge-which Perkins has enforced by often engaging in the popular political cartoon setup of Trump secretly asking Putin for instructions-is dangerous to entertain. This is because when people act like everything Trump does is in service of Russia, it completely pushes out opportunities to criticize Trump for his administration’s unprecedentedly hawkish Russia policies.

To stay consistent with the Russiagate narrative, commentators like Perkins have ignored policies like Trump’s reckless arming of Russia’s anti-Russian forces in Ukraine, the Trump DOJ’s forcing RT to register as a foreign agent, Trump’s exacerbating cold war tensions by expelling Russian diplomats, and the fact that the Trump administration has killed Russians in Syria as part of its illegal war against the Assad government.

The rhetoric about how Trump is “Putin’s puppet” even encourages Trump to further advance America’s perilous cold war escalations with a nuclear superpower. Two of the most dangerous acts of warmongering by Trump-his arming of Ukraine and his Syria strikes-are most definitely the result of the McCarthyist accusations and innuendos that Russiagaters have directed against Trump. Trump’s sabotage of the INF treaty, war campaign against Iran, and threats to respond to Russia’s military protection of Venezuela are also no doubt motivated by a desire to look “tough on Russia.” When a public figure repeats the Russiagate narratives, they’re increasing the risk for nuclear war.

Many other progressive figures have embraced these toxic and dishonest narratives about Russia in recent years. Michael Moore, for instance, was a brave truth-teller about intelligence agency deceptions during the Iraq War. His 2003 book Dude, Where’s My Country had a section titled “Home of the Whopper,” which deconstructed the Bush White House’s lies about Iraq. But then in 2016, Moore tweeted: “The CIA has determined Russia hacked into our election to help elect Donald J. Trump.” Even then, the evidence for the CIA’s claims was publicly known to be inconclusive, so Moore’s statement was untrue. And Moore has kept repeating such narratives about Russia with the (ultimately mistaken) hope that it will harm Trump.

To his credit, last year Moore signed an open letter calling for the U.S. to try to improve its relations with Russia. But opposing war in principle doesn’t make up for the harm that’s inevitably done by affirming the lies which are used to manufacture consent for war. In March of last year, The Young Turks’ Cenk Uygur demonstrated this by making a panel segment titled “Trump Silent After Putin Demonstrates Missile Attack On US.” Even as Uyghur complained that Trump wasn’t being sufficiently aggressive towards Russia, Uygur was trying to convince his viewers and himself that he wasn’t pushing for war.

This is the fundamental madness of the anti-Russia campaign of recent years. There are people who otherwise think sensibly, and put on a rational common-sense veneer, while at the same time promoting an insane CIA-manufactured effort to drive the world’s greatest powers into an ever-escalating nuclear standoff. If Trump’s numerous war provocations against Russia haven’t given these people “some degree of certainty” that Trump isn’t working for Putin, they haven’t been approaching this issue rationally, and they likely won’t start to as the U.S.-Russia cold war continues.

My hope is that the sheer absurdity of the narrative that Russiagaters are pushing will cause the public to reject their assertions. This shift in consciousness has gotten closer to happening since Mueller’s report confirmed that the Trump-Russia collusion charge has been bogus all along. This month, Uygur got many people to question the validity of his continued belief in Russiagate with a bizarre tweet which read: “Trump just changed policy on Venezuela and is reportedly frustrated with Bolton that he is being too militaristic (that’s news to Trump?). While I agree with the new policy, it comes right after a call with Putin. Direct evidence that he is literally taking orders from Putin.”

Indeed, laughing at takes like this is a good way to spread awareness of how ludicrous the anti-Russia narrative is. Last year, the BBC even reacted to the widespread mocking of Russia conspiracy theories with the hilariously ironic headline: “How Putin’s Russia turned humour into a weapon.” Let’s continue to give credence to such concerns, and work to fight the anti-Russian propaganda through ridicule and satire. It may be our best hope for turning around this march towards war.

ABOUT THE AUTHOR
Rainer Shea is writing articles that counter the propaganda of the capitalist/imperialist power establishment, and that help move us towards a socialist revolution.

DO NOT BELITTLE PROTESTERS IN U.S. BY CALLING...

Police Killings are a Political Tactic