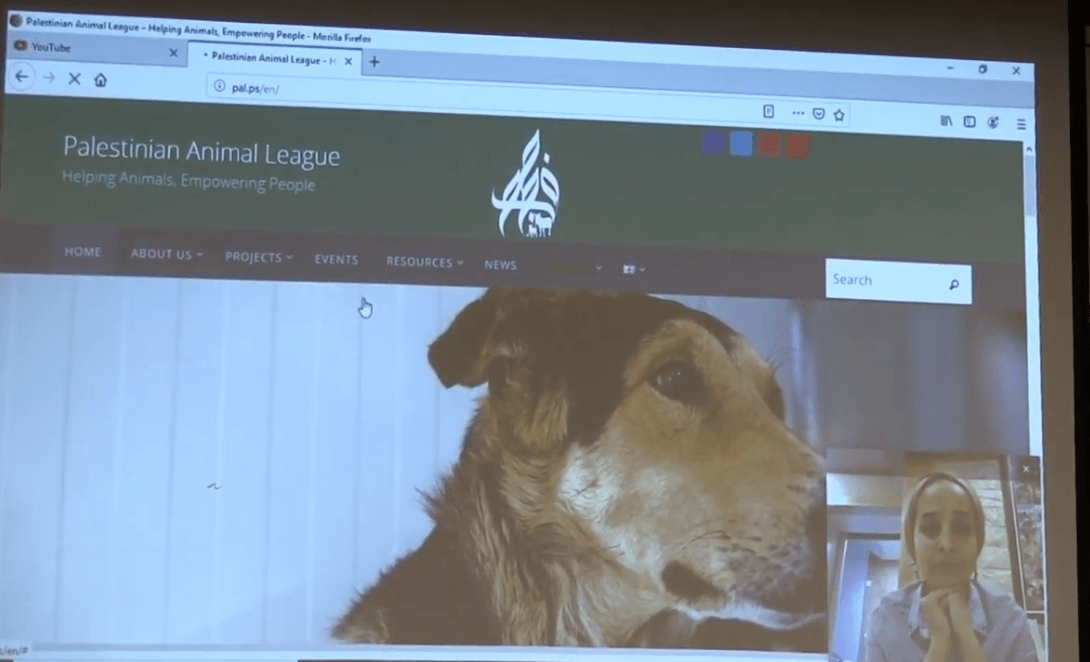 For over a decade, the nation branding campaign Brand Israel has sought to “wash” the crimes of occupation, apartheid and ethnic cleansing by carefully crafting the image of Israel as a progressive, forward-thinking oasis of modernism in the Middle East. The campaign has appropriated elements of both the LGBT and environmental movements to advance these goals. Such “pinkwashing” and “greenwashing” are unique in the world of state-sponsored propaganda campaigns. 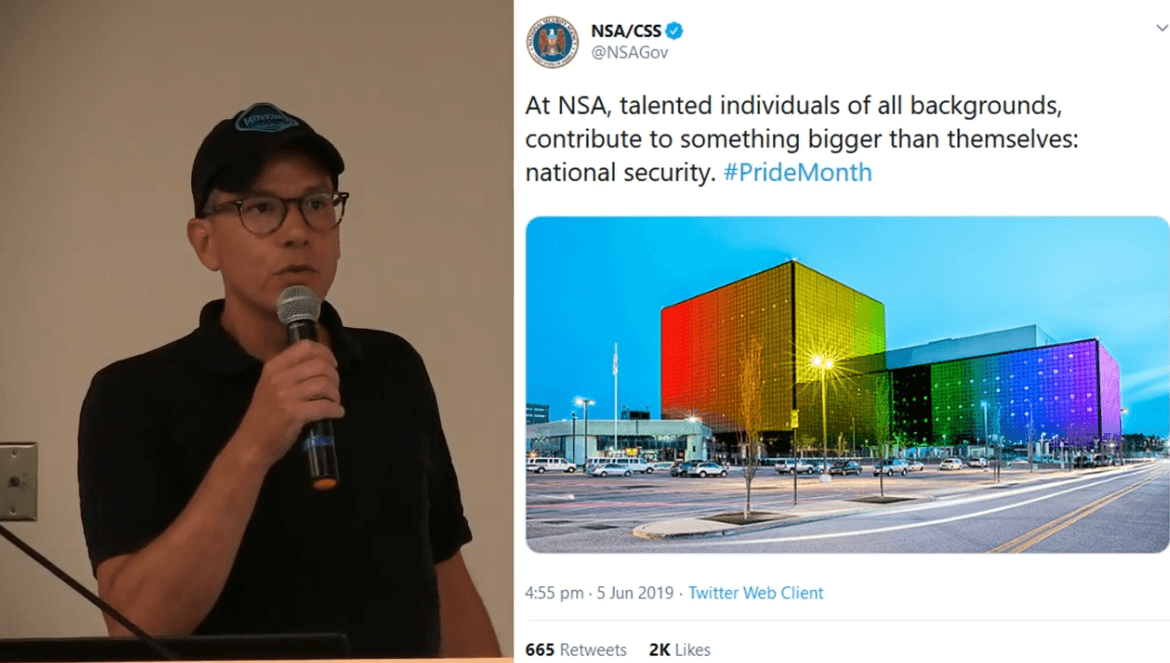 ABOVE: Veteran social justice and animal liberation activist John Addario, with slide on NSA's "pinkwashing". The cynicism of the system and its myriad image- and narrative-manipulation prostitutes is breathtaking. The marketing team for "Brand Israel" includes marketing and p.r. heavyweights Saatchi & Saatchi, Young & Rubicam, and the ultra corrupt Burston Marstellar, a firm that has whitewashed corrupt dictators and political murderers for generations. The list includes Chile's butcher, Augusto Pinochet, and Indonesia's mass murderer Suharto, who, with help from the CIA, turned Indonesia into a no-holds-barred playground for internaitonal business. 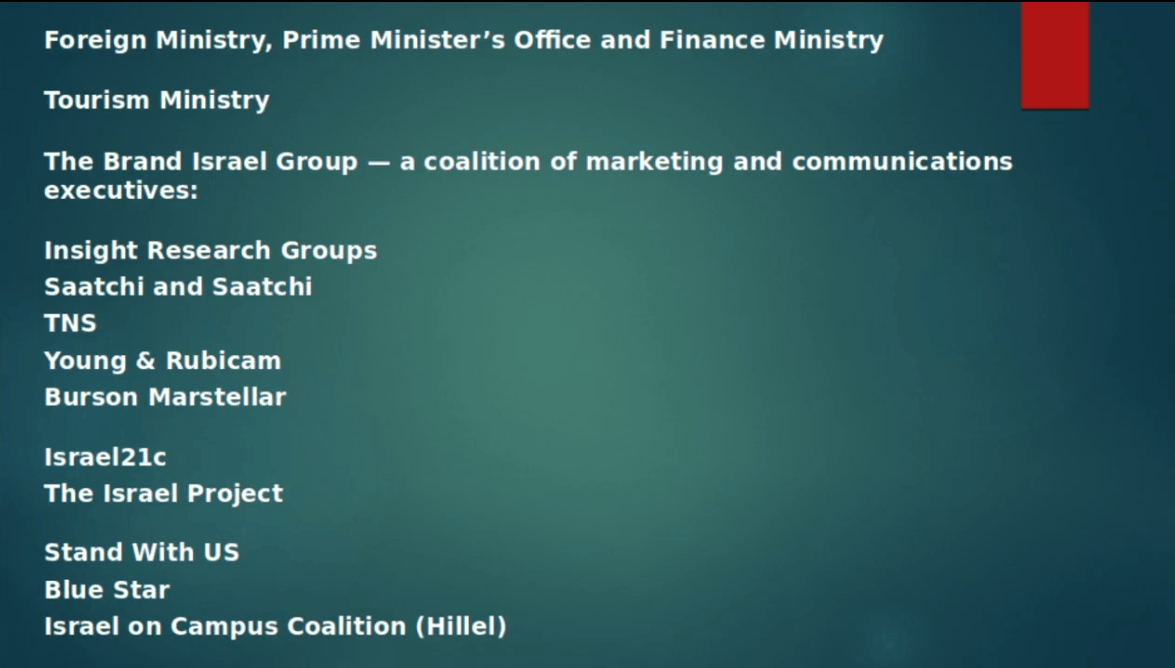 Over the past several years, veganism has increasingly been weaponized for the same ends. Animal advocates across the West have been influenced by various claims of a vegan/ animal rights “revolution” in Israel and even participated in aspects of veganwashing. By contrast, the emerging animal rights movement in Palestine – like all social movement struggles – has suffered greatly under Israel’s occupation and violent expansionist agenda.

Vegans for BDS, in conjunction with Animal Liberation Currents, organized a panel discussion on the recent history of veganwashing, the need for a comprehensive response from the animal liberation movement and the politics of BDS organizing.

John Riddell is a socialist activist and historian, best known for translating and publishing historical documents of socialist movement. He has been an advocate of the Palestinian freedom struggle for many years and is an active ally with Independent Jewish Voices (Toronto).

Ahlam Haroun is the Executive Director of the Palestinian Animal League (PAL) and a long time feminist and animal activist in the West Bank (participating via Skype).

Michael John Addario is the editor of Animal Liberation Currents magazine. For more than twenty years he has been involved in animal rights activism, socialist organizing, the trade union movement and the NDP. He has been a shop floor and staff organizer with several unions, including IFPTE, United Steelworkers and SEIU. He is an organizer with Vegans for BDS.

Danielle Williams is a composer and music educator who taught for 2 years in Ramallah. During that time, she was an active volunteer with the PAL and helped organize the first international solidarity conference in the West Bank in May of 2018. She is an organizer with Vegans for BDS.

Includes an opening performance by an informal Palestinian Dabke troupe from Mississauga, Ontario.

The event was sponsored by the Canadian BDS Coalition, Socialist Project, Toronto BDS Action, and the Centre for Social Justice.

With thanks to Pance from Socialist Project’s Leftstreamed series for the recording.

Animal Liberation Currents is truly independent. We do not have a paywall. All content on the site is available freely. We do not run ads. We do not take corporate money. We have no ties to advocacy organizations of any kind.

Our readers are financing genuine public-interest journalism, indispensable analysis and a digital community of like-minded activists. And we can’t do it without you.

Be part of it!

Thank you for visiting our animal defence section. Before leaving, please join us in a moment of compassion and reflection. Thank you.

In a hole and still digging: the left and Brexit

Palestine – Anniversary of the Death of a Child –...