November 4, 2019
Please make sure these dispatches reach as many readers as possible. Share with kin, friends and workmates and ask them to do likewise.

A dispatch from teleSUR

The leaders also expressed their concern about the leaks of confidential files of police Intelligence, in which there were files on social and union leaders who would be subject to police follow-ups.

More than 100 Chilean organizations, trade unions and social organizations, who have come together under the banner of Social Unity Roundtable, made a new call to take to the streets Monday to continue their calls for an overhaul  of the country’s constitution and economic and political models.

In the capital, the call is to meet at 5:00 p.m. local time in Plaza Italia to start a march from there, along the Alameda, towards Plaza Los Héroes. Earlier, at noon, the meeting point of the mobilizations will be the front of the capital’s headquarters of Congress to demand that lawmakers stop debates and sessions regarding bills that only aim to deepen inequalities.

“We reaffirm the call of the super Monday, where at 5:00 p.m. in Plaza Italia we will convene to make a new demonstration day,” said the president of the CUT, Barbara Figueroa. 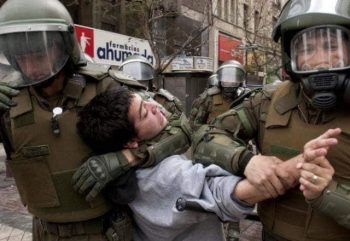 “[B]ecause we are clear that as long as there is no pressure, there is a government agenda that goes to keep moving forward, there are legislative urgencies that are going to keep moving forward and, unfortunately, we have an opposition that in this has not had firmness to clarify that as long as Chile is not normal, parliament cannot continue functioning as if nothing happens.

Carolina Espinoza, spokeswoman for Coordinator No + AFP, went on to slam the government for its neoliberal agenda that has continued despite the unrest.

“Parliament, unable to align itself in the defense of our rights. Today the government puts the accelerator on a battery of projects, all contrary to rights and deepening neoliberal policies. That is why we say with great force and clarity that in our claims as a people today, we have won nothing. Therefore, it is essential that we continue in the struggle, that we continue to be mobilized and mobilized. ”

The leaders also expressed their concern about the leaks of confidential files of police Intelligence, in which there were files on social and union leaders who would be subject to police follow-ups. They also condemned the cases of human rights violations that are being observed throughout the country.​​​​​​​

How the War in Ukraine Started