Directed by Sam Mendes; screenplay by Mendes and Krysty Wilson-Cairns 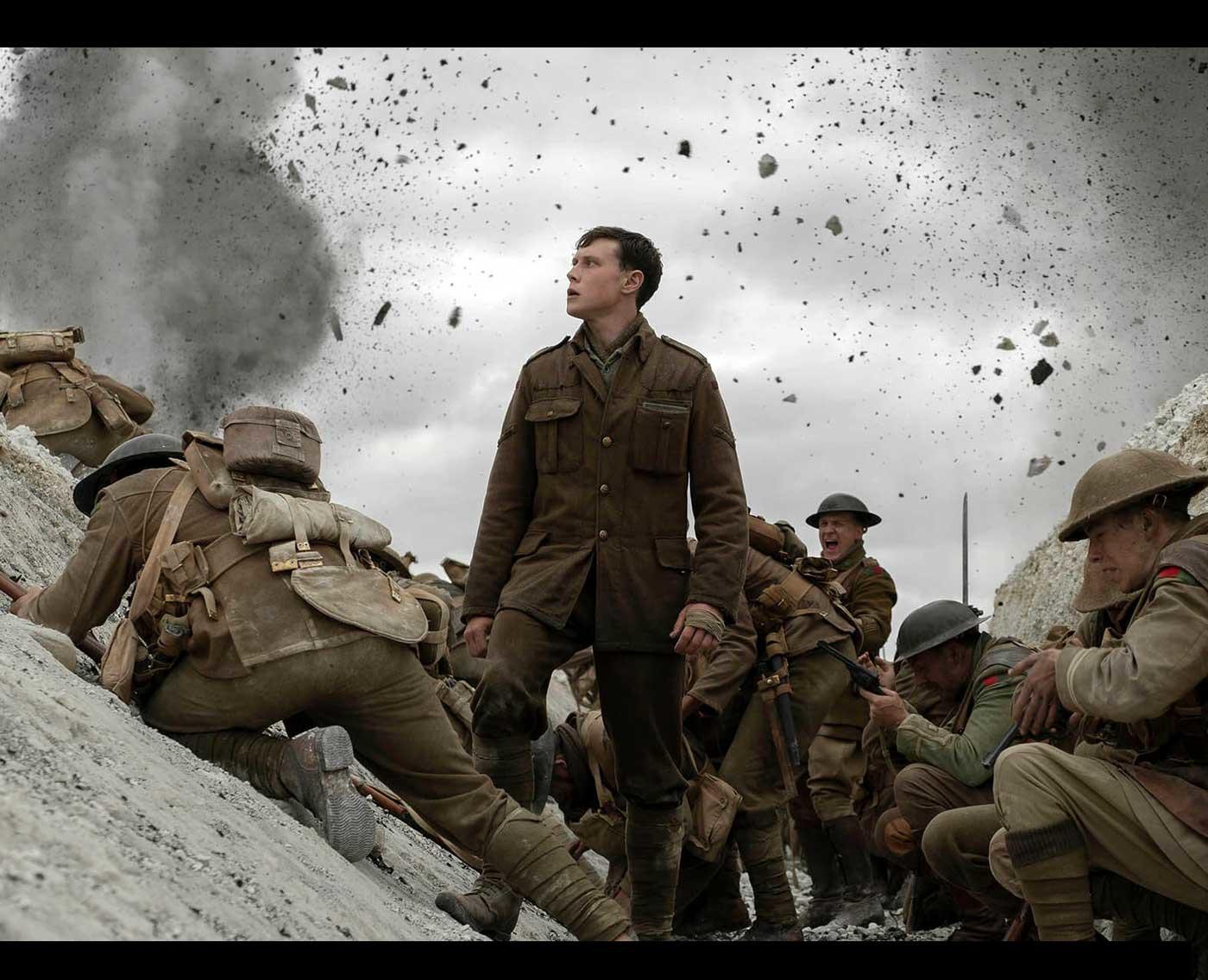 [dropcap]C[/dropcap]o-written by Mendes and Krysty Wilson-Cairns, the movie concerns two young British soldiers on a mission to halt an attack by a British battalion. That offensive would fall into a German ambush leading to the possible destruction of the unit.

While the film graphically shows some of the horrors of trench warfare, it fails to indict those responsible for the carnage and is oblivious to the war’s socio-historical context. To put it bluntly, 1917 does not qualify as an anti-war film.

In fact, the movie, treating one of the titanic events of modern times, is largely conventional and intellectually shallow. Fully accepting national divisions and enmities, it opens the door to British and other patriotisms. While 1917 is something of a technological tour-de-force, ideologically it represents a significant regression from anti-war films on the subject of World War I such as Lewis Milestone’s All Quiet on the Western Front (1930), Jean Renoir’s Grand Illusion (1937) and Stanley Kubrick’s Paths of Glory (1957), as well as Peter Jackson’s 2018 documentary, They Shall Not Grow Old. 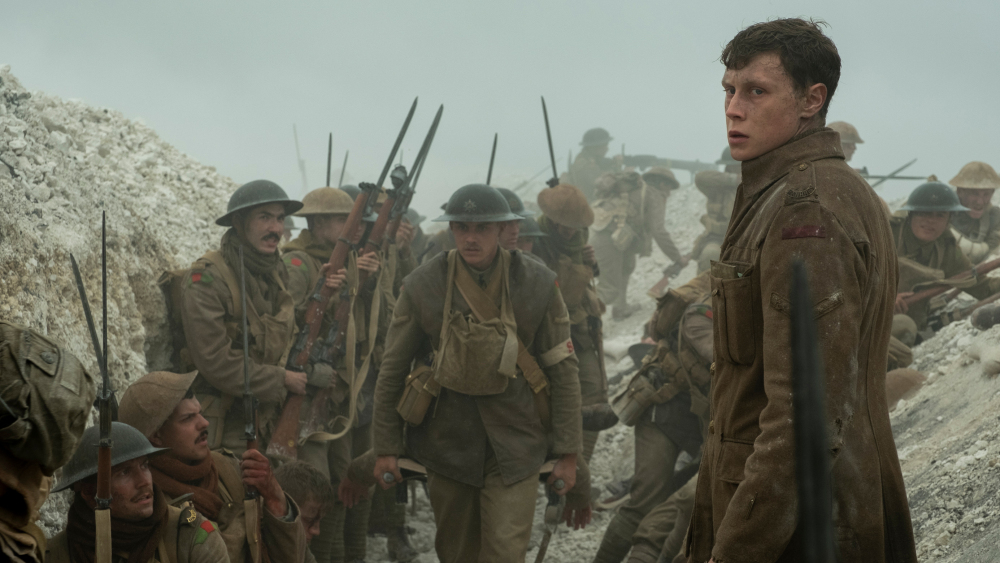 Mendes’ movie opens in Northern France on April 6, 1917 and unfolds over a 24-hour period. Two young British lance corporals, Tom Blake (Dean-Charles Chapman) and Will Schofield (George MacKay), receive instructions from General Erinmore (Colin Firth) about a high-risk mission to get a message to a British battalion planning to attack German forces, believed to be in retreat.

Aerial intelligence has learned that the Germans are not retreating but have only made a tactical withdrawal in order to ensnare their enemy. With communication lines cut, Tom and Will must hand-deliver an urgent message to the 2nd Battalion of the Devonshire Regiment to call off their planned offensive. Some 1,600 lives are at stake, including that of Tom’s brother.

Passing through British trenches strewn with damaged and war-weary soldiers, many of them boys, the duo cross No Man’s Land, reaching abandoned German bunkers. A rat trips a wire, causing the tunnels to collapse, burying Will alive. Rescued by Tom, the pair continue their journey through a hellish landscape of rotting, bloated corpses, blown-up artillery, bombed-out buildings. It is destruction on an almost unimaginable scale and scope.

The lesson of 1917 is that bloated artifice can never replace genuine art.

During their perilous expedition, the more cynical Will tells the naive Tom that he traded a combat medal he won for a bottle of wine (“It’s just a bloody bit of tin”). But when tragedy strikes, Will becomes an unstoppable fighting machine. He is warned by a captain (Mark Strong) to “make sure there are witnesses,” when he delivers the message to halt the attack, because “some men just want the fight.”

In considering 1917 as a whole, it should be noted, first of all, that while Mendes’ grandfather, the future writer Alfred Hubert Mendes, carried a message through hazardous territory in 1917 during the mutual mass slaughter known as the Battle of Passchendaele (in which hundreds of thousands of British, French, German, Canadian, New Zealand, Australian, Indian, South African and Belgian soldiers died pointlessly), the “life-saving” character of the mission and the personal element (the desire to save a brother) are entirelyinvented. The film has a melodramatically manipulative character from the outset. 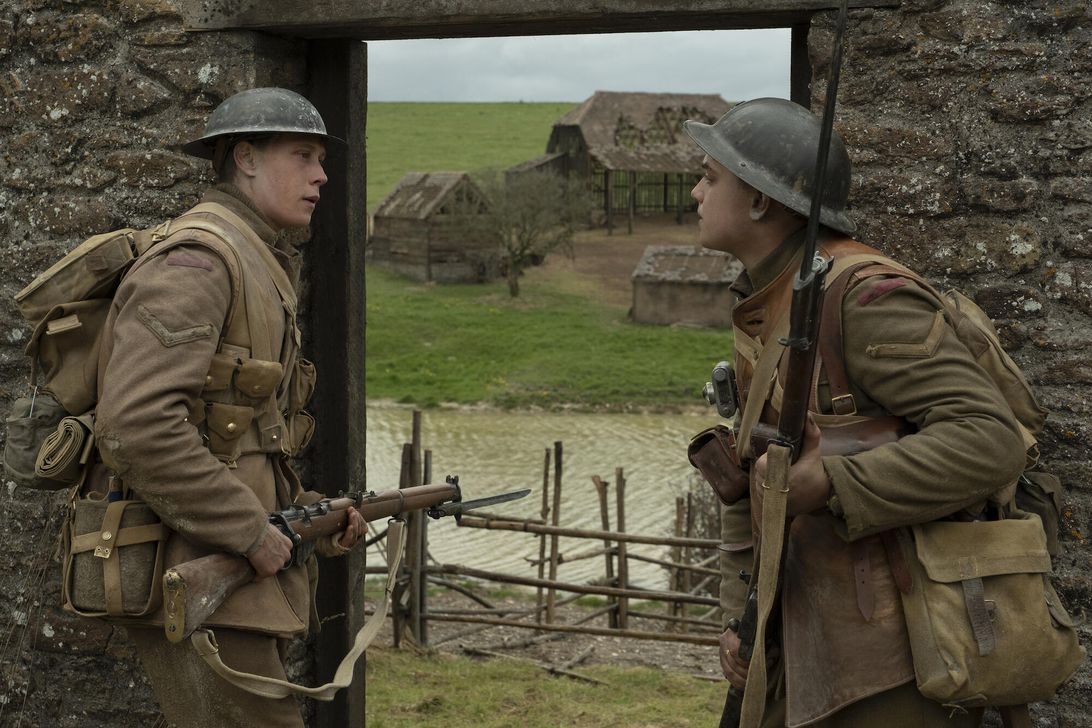 Moreover, the title, 1917, displayed in large typeface in the film’s advertising campaign, is bombastic and even deceptive. For much of the world’s population, its most politically conscious elements certainly, “1917” is identified primarily with the October Revolution in Russia, the event that, above all, helped bring about the end of the bloody madhouse of the imperialist war. If not for the Russian Revolution and the threat of revolution elsewhere (the German Revolution erupted in November 1918), the various Great Powers would have carried on the death and devastation, resulting in even more catastrophic human suffering. Whether intentionally or not, the titling of the film is an effort to “reclaim” the year 1917 for the cause of national honor, patriotism and military valor.

Leaving the October Revolution aside, the title is disproportionate to the story it tells, which hardly encompasses even the purely military side of the conflict in 1917. The movie’s principal strength is its remarkable cinematography (Roger Deakins), creating an exhausting two hours of terrifying war imagery. As previously noted, the spectator is overwhelmed by visuals and unimpressed by the historical analysis. While there is sympathy for the British casualties, there is none for the German victims. In one scene, Will and Tom try to minister to a gravely wounded German fighter and pay dearly for their merciful efforts. It is a historical fact that the biggest danger to the British soldiers, in the end, came from their own commanding officers and ruling elite. 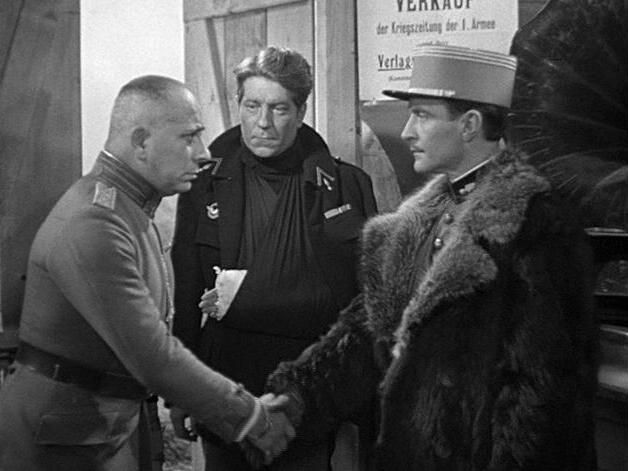 The unceasing, tension-filled momentum of the film serves to conceal its essential lack of ideas or criticism. Alonso Duralde at The Wrap noted legitimately that “the movie is more successful as a thriller than as a thoughtful examination of war and its horrors; Mendes seems less interested in bigger ideas about the nightmare of battle and its effects on his characters than he is in Hitchcockian audience manipulation.” Duralde contrasted 1917 with “tales like Paths of Glory or Gallipoli [Peter Weir, 1981] or [Renoir’s] La Grande Illusion, which used the conflict as a way to discuss class or military injustice or the last gasp of the European aristocracy.”

Along those lines, it is worth recalling director Jean Renoir’s comments in his autobiography: “If a French farmer should find himself dining at the same table as a French financier, those two Frenchmen would have nothing to say to each other, each being unconcerned with the other’s interests. But if a French farmer meets a Chinese farmer they will find any amount to talk about. This theme of the bringing together of men through their callings and common interests has haunted me all my life and does so still. It is the theme of La Grande Illusionand it is present, more or less, in all my works.”

Mendes’ movie never asks who was responsible for one of the most barbaric episodes in world history, a calamity that resulted in some 40 million civilian and military casualties, including an estimated 22 million dead.

In fact, 1917 ’s one political comment on the war comes when a British general utters “The only one way this war ends … is the last man standing.” The claims that the film’s depiction of numerous atrocities makes it an anti-war work are spurious, as is the case in regard to various contemporary movies on the subjects of the Iraq and Afghanistan invasions (The Hurt Locker, Zero Dark Thirty, Lions for Lambs, Mendes’ own Jarhead, etc.).

It is entirely possible to picture the awfulness of such conflicts—particularly as they affect one’s “own” side—and still insist, or imply, that such conflicts are necessary, inevitable, or, once begun, have to be “carried through to the end” in the national interest. The uncritical, narrowly focused treatment of the immediate “facts” of the war in 1917 helps plant it firmly in the pro-British establishment camp. 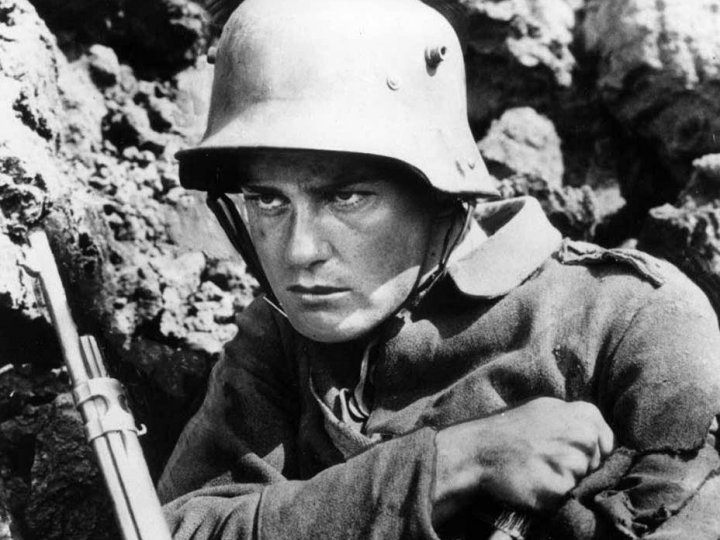 There is more intensity and truth in one still of L. Milestone's All Quiet on the Western Front (1930), with Lew Ayres in the lead, than in the whole Mendes concoction.

Media accounts suggest that Mendes and Wilson-Cairns, described as a “a World War I buff,” were unserious in their approach to the deeper, starker meaning of the events depicted in 1917. Indiewire describes Mendes—appointed a Commander of the Most Excellent Order of the British Empire in 2000 and only recently knighted, and fresh from directing two empty-headed James Bond extravaganzas (Skyfall and Spectre)—and Wilson-Cairns spreading maps “showing front line locations in April 1917” on the “London kitchen table where Mendes perfected Skyfall .”

Indie wire continues: “The writers figured out where the French towns were, then traced—and timed—the treacherous route the two infantrymen would take on foot, throwing in incidents and stories they had each picked up over the years.”

There is no indication that Mendes and Wilson-Cairns carried out substantive historical research into the processes that made the ghastly situation in 1917possible, much less consulted critics of war and imperialism.

If they had, they might have learned that not everyone conceives of the bloody inferno of World War I as a clash between the “good” British and the “evil” Germans, the conception the film leans toward. As the WSWS explained in November 2018, the 1914-18 war was not fought, as the British authorities propagandized, “to defend the right of small nations against the depredations of Germany.” Nor was it fought for any of the self-serving, lying justifications provided by the other belligerents, Germany, France, Austria, Russia or the US.

The relentless blasting of the guns, the senseless mass slaughter in what was later to be falsely labeled the “war to end all wars” or the war to “make the world safe for democracy,” was pursued for the sake of markets, profits, resources, colonies and spheres of influence.” Mendes’ “epic” film has no interest in such matters.

About the Author
Joanne Laurier is a senior art & culture critic with wsws.org, a socialist publication, and certainly one of the best in this field (along with colleague David Walsh) in the anglophone sphere.

An excellent review. Laurier goes much deeper than the usual “critic,” reviewer, who, in fact, rarely criticizes the elitist network of writers-artists-producers for their pro-System, hurrah-team mindmush that masquerades as “art” in our contemporary world. Ms. Laurier questions and disputes the hypotheses, illustrates the elusiveness of the truths that the servants of mis- and dis-information dare not utter or portray. Bravely, she provides historical context. My only quibble with her review is her idea that most movie-goers will immediately associate the title “1917” with the Russian Revolution of that year! I suspect that in the U.S. most movie-goers will not even connect that year with “World War I”! Yes–our media and educational systems are that flagrant!