January 23, 2020
Please make sure these dispatches reach as many readers as possible. Share with kin, friends and workmates and ask them to do likewise.

The NATO alliance is busily erasing the truth about the origins and conduct of the Second World War, with Washington, Berlin, London, Warsaw and their satellites shamelessly claiming the Soviets share the blame for the catastrophe. 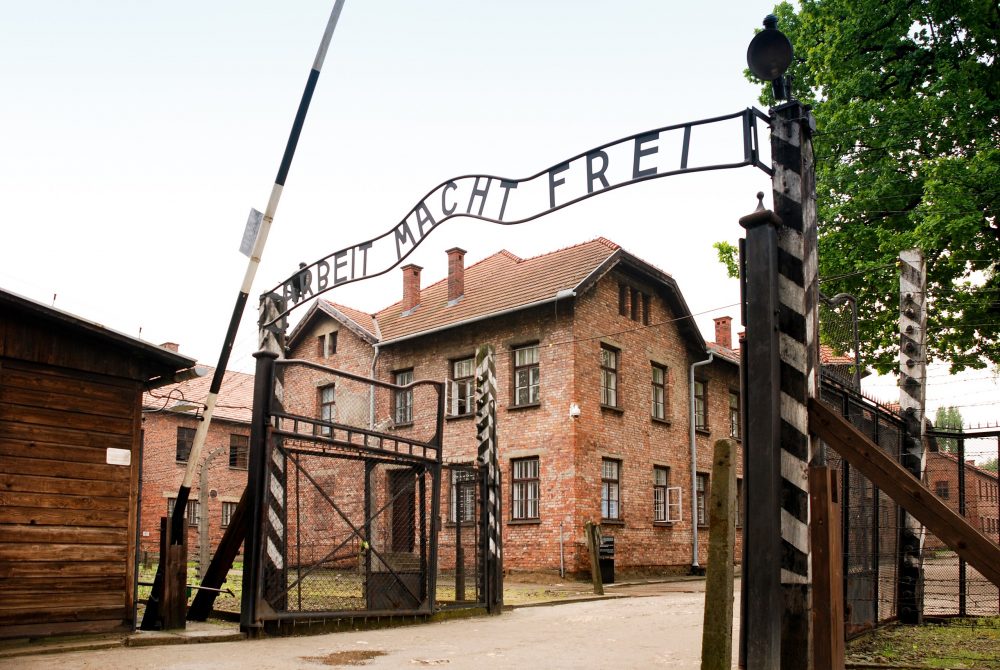 Main gate at Auschwitz (in Poland) really a complex of camps, with Birkenau the most notorious. The camps were liberated by the Soviet Army. And that is a fact.

This week sees the 75th anniversary of the liberation of the Nazi Auschwitz death camp by the Soviet Red Army. But the momentous event is being overshadowed by renewed attempts by the Polish authorities – aided by American and German officials – to shift the blame for the Second World War on to the Soviet Union.

Because what is going on in the Polish commemoration of Auschwitz and claims about the origins of the Second World War more generally is an appalling distortion of history to suit current geopolitical interests in the West of undermining Russia. Concealing or denying the causes of war only traps the world into repeating war.

Rather than being given a full place of honor for the liberation of the extermination camp in southern Poland on January 27, 1945, by the Soviet army, today Moscow is being sidelined despite its crucial role in crushing the Nazi regime and all its horrors.

Russian President Vladimir Putin has reportedly declined to attend the 75th anniversary in Poland. Russia will be represented by its ambassador to the country. Putin is attending an equivalent event in Israel, and at that alternative commemoration will be afforded due prominence to mark the liberating achievement of Russia’s predecessor, the Soviet Union. It is understandable why the Russian president decided to give the event in Poland a miss because of the toxic claims made recently by Warsaw and other Western states concerning allegations that the Soviet Union colluded with Nazi Germany in instigating the war.

This distortion of history has even gained an official status when the European Parliament – after Polish and Baltic state lobbying – adopted a resolution last September in which the Soviet Union is cast as equally culpable along with the Nazi Third Reich for starting World War II.

Auschwitz II (Birkenau), the main extermination center. The installation has been preserved as a reminder to the peoples of the world, especially in Europe, even if many of their leaders are busily denying this history.

When President Putin slammed that resolution as “nonsense” and went on to point out Poland’s own documented collaboration with Nazi Germany, the current Polish government, along with German and American diplomats, doubled down on the accusations impugning Moscow for having partial responsibility for the worst conflagration in history.

Those Polish and Western accusations stem from the historical Nazi-Soviet non-aggression pact which was signed on August 23, 1939, one week before the Nazis invaded Poland. Thus it is claimed that Stalin’s detente with Hitler emboldened the latter to launch the war.

As Radio Free Europe reported: “German envoy Rolf Nikel and US Ambassador to Poland Georgette Mosbacher both said on December 30 that Germany and the Soviet Union colluded to start the war in 1939 that led to the death of tens of millions of people on continental Europe.”

By implicating the Soviets in Nazi horror, the Americans and their rightwing surrogates in Poland and the Baltic states can breath some air into the stale, breathless claims of “Russian aggression” towards modern-day Europe. That twist is especially odious given that the Soviet Union suffered the most out of any nation from Nazi barbarity, with up to 25 million dead and tens of millions more wounded.

Polish Prime Minister Mateusz Moraweicka denounced Putin’s version of history as “lying… trampling the memory of those events. Poland must stand up for the truth, not for its own interests but for the sake of of what defines Europe.”

That’s quite an audacious feat of historical distortion.

The motives for such re-writing of history are obvious. Germany can unburden some of its war guilt for terrorizing Europe with its fascist genocide.

By implicating the Soviets in Nazi horror, the Americans and their rightwing surrogates in Poland and the Baltic states can breath some air into the stale, breathless claims of “Russian aggression” towards modern-day Europe. That twist is especially odious given that the Soviet Union suffered the most out of any nation from Nazi barbarity, with up to 25 million dead and tens of millions more wounded.

Poland has perhaps the most to gain from falsifying history. Its own shameful past of colluding with the Nazi regime before and during the war is, it is anticipated, whitewashed and shoved down the memory hole.

The people lining up to disparage Russia over alleged Soviet complicity with Nazi Germany claim, ironically, that Putin is “rewriting history” by referring to Soviet records and propaganda.

One of the finest scholarly accounts of the period from the First World War until the late 1930s and the outbreak of war is the work by British historian AJP Taylor, entitled ‘The Origins of the Second World War’ (published 1961). Taylor is no “fellow-traveller” of the Soviet Union. His study is a consummate exercise in objective scholarship.

The Russian perspective is substantially corroborated by Taylor (and other Western historians, see for example this recent essay by Michael Jabara Carley). The Nazi-Soviet non-aggression pact on the eve of the war’s outbreak was a desperate attempt by Moscow to keep the Third Reich at bay. Because, as Taylor points out, the Western powers, in particular Britain and France and Poland, had consistently rebuffed Soviet appeals to form a collective European security pact against Nazi Germany.

Britain, France and Poland looked the other way when Hitler annexed Austria in 1936 and invaded Czechoslovakia in 1938. The Fuhrer’s manifesto in ‘Mein Kampf’ and his various ranting speeches during the 1930s explicitly targeted the Soviet Union and European Jewry for annihilation in a Final Solution.

Polish ministers during this period shared the Nazi contempt for Soviet and Jewish people. The case of Polish Ambassador in Berlin Josef Lipski proposing to Hitler in 1938 a scheme to deport European Jews to Africa is indisputable.

What Polish authorities today are compelled to deny is the objective historical record which assigns complicity to their predecessors in unleashing the Nazi monster. The fact Auschwitz and other Nazi extermination camps are on Polish territory does not seem to give these virulent Russphobes any pause for thought. The fact that the Soviet Red Army saved millions of Poles from Nazi barbarity – a barbarity that their vain, deluded political leaders emboldened – is perhaps the clearest example of how “Lies Do Not Set You Free”.

Finian Cunningham is an award-winning journalist. Originally from Belfast, Northern Ireland, he holds a Master’s degree in Agricultural Chemistry and worked as a scientific editor for the Royal Society of Chemistry in Cambridge, England, before entering a career in journalism. For over 25 years, he worked as a sub-editor and writer for The Mirror, Irish Times, Irish Independent and Britain’s Independent, among others. Now a freelance commenter, his columns appear on RT, Sputnik & Strategic Culture Foundation. He is the recipient of the Serena Shim Award for Uncompromising Integrity in Journalism (2019).