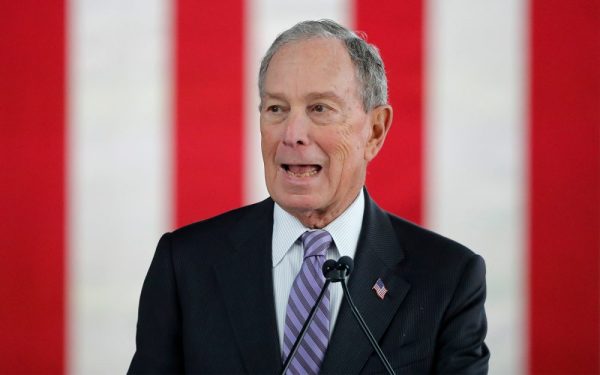 The US political system has reached a level of stinking degeneracy where absolutely anything is possible, and most of the ugly undemocratic maneuvers are now happening in broad daylight and with complete impudence. Does Bloomberg have a chance? Maybe. Anything can be bought off in America.

[dropcap]M[/dropcap]ike Bloomberg is the world's ninth richest person. An oligarch known for strong racism and insulting sexism who once was the Republican mayor of New York City. He since decided that he wants to become president.

As he saw no chance to run for a Republican party that is happy with Trump he filed to run as a Democratic candidate. Bloomberg has since bought the Democratic Party in every state as well as the DNC:

A few months later, they changed the debate rules to let oligarch Bloomberg into the debates... after he gave the DNC $300K.

His political tactic is very simple. He does not talk about issues, as people would not like what he has to say, but simply spends tons of money:

He’s dropping huge sums of money: on staff and resources, on TV advertisements, and on Facebook ads, where Trump has long dominated. And he’s attempting to overcome his stodgy public image with the help of a meme army and through well-catered campaign events seemingly designed to convince voters that life under a wealthy technocrat might not be so bad. “I think it’s classy,” one supporter told the Times at a Philadelphia campaign rally complete with drink station and a selection of cheese steaks, hoagies, and brie-and-fig appetizers. “I feel like it’s a nightclub in here. This is what he needs to get people going.”

To this date Bloomberg has spent more than $350 million for his campaign. He is willing and can afford to put several billions into it. Over the years Bloomberg has given more than $10 billion to build a political and philanthropical empire. He used that money to suppress voices  critical of him:

In 2015, Center for American Progress researchers wrote a report on U.S. Islamophobia, w/a 4300-word chapter on the Bloomberg-era NYPD.

When the report was published, the chapter was gone.

By then, Bloomberg had given CAP ~$1.5mm. That number has grown.

The really bad thing is that it works:

3 months ago, polls found Mike Bloomberg “widely disliked” with the highest negatives in the race. Now he’s a top 3 contender for the Democratic nomination. One of the richest humans ever is trying to upend every part of the process. And this is just the stuff we know about.

The Democratic Party and lots of its bought off functionaries seem to be happy with this. They do not mind that it makes the U.S. look worse than the Ukraine. Yes, U.S. politics are always corrupt. But outright buying one's way into office is exceeding the usual stench.

But would Bloomberg, with Hillary Clinton as running mate, really be able to bring out the votes that are needed to beat Trump? I for one doubt it.

Atrios is appalled by the whole scheme but still falls for it:

Bloomberg is bad for lots of reasons, and one of them is PEOPLE SHOULD NOT BE SO WILLING TO EMBRACE A BILLIONAIRE WHO IS BUYING (not just ads, but people) THE ELECTION WITH HIS ABSURD FORTUNE. I mean, ok, sure, if it's BLOOMBERG OR TRUMP I'll choose Bloomberg, but why are people establishing this as the choice? It's absurd. The only person who can beat an asshole (fake, I know) billionaire is another asshole billionaire? Broken brains everywhere.

"[I]f it's BLOOMBERG OR TRUMP I'll choose Bloomberg" is, in my view, exactly the wrong response to this hijacking of a party and election. It is this behavior that makes Bloomberg's move possible in the first place.

Any good response to billionaires hijacking elections must demonstrate that campaigns by rich people have a high risk to fail. To vote for a third party or to abstain is the only responsible reaction to it.

America, has the best Justice system money can buy, and where everything is for sale, including Presidency.

In the US no one should be voting for either the Democrats or Republicans. Vote! But vote anyone but the corrupt duopoly.This goes for the senate, as well as the President. It is the only way to send an appropriate message to the US oligarchs.

Bloomberg's racism and "stop and frisk" harassment of a whole generation of kids, when he was New York mayor, will surely come back to bite him in the upcoming debate. So many ghosts of our haunted past. I can't believe he could become the complete figurehead of the 1%. I don't think he can make the cut, and land in the White House.

Bloomberg could be characterized, whether fairly or unfairly, as just another billionaire from New York in the process of attempting to buy a public office and if he has to buy the “leadership” of a political party as a prerequisite that’s okay. The Mike and Don show. Billionaires that share this--they are not producers of things ala Henry Ford but financialistas rentiers ala Michael Milliken. On issues that affect oligarchy wealth, it is not unreasonable to suspect no difference… nada.
On other matters say environmental matters but not on working class matters, Mike will make ‘nicer’ noises. Mikes pronouncements on marijuana and his bigoted and discriminatory law enforcement policies suggest he is closer to Don than me. In 2016 a vulture capitalist former Democrat money captured the morally bankrupt Republican Party and bought an Emperorships err I mean “Presidency”. In 2020, a vulture capitalist, former Republican is plagiarizing him to money capture the morally bankrupt Democratic Party in order to attempt to buy an Emperorship err I mean “Presidency”. Trumpberg or Blump--no real difference-- except that Mike keeps the mask on his inner class warfare wolf more firmly. Credit to Don for dropping the mask so that everyone can see how "business" really governs what was once one of humanity’s better shots at a functioning large population democracy.

In more than a few ways this is Oligarch Street's err I mean “Wall Street’s” final takeover of both parties.

It used to own, 1 and a half political parties, now it will have two.

Bloomberg is not going to get people to vote in large enough numbers to be a contender, he had zero write-in votes in NH. So he is about running to gain support just enough to force a second vote in order to for superdelegates to over turn the will of the people for Bernie at the convention.

Some people want Tulsi to drop out and endorse Bernie, like Kyle Kulinski, but those people are not thinking right because they act as if Bernie is not a VERY OLD man who has had health issues recently. If Tulsi drops out and endorses Bernie and then Bernie a few months from now has health issues which force him out---THEN WHAT KYLE? You want Warren who is a proven con artist and neocon? See Tulsi Gabbard is The Steely Dan of Politics or: Perfection Isn’t For Everyone