Home ABOMINATIONS How the CIA Created the EU

How the CIA Created the EU

November 10, 2020 12 minutes read
Please make sure these dispatches reach as many readers as possible. Share with kin, friends and workmates and ask them to do likewise.
Eric Zuesse 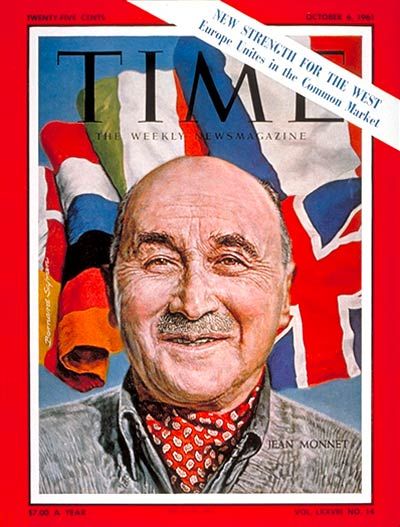 Jean Monnet on TIME's cover. US media are always ready to flatter figures the empire needs to enlist. (Oct 6, 1961)

Whereas it has become commonplace for Russia to deny responsibility and blame hostilities on the West in its official rhetoric, creating a reliable propaganda base upon which it can rely to justify its disregard of international law and continue its aggression against Eastern Partnership countries; [the EU]
1. Stresses that the Second World War, the most devastating war in Europe’s history, was caused by the notorious Nazi-Soviet Treaty of Non-Aggression of 23 August 1939, also called the Molotov-Ribbentrop Pact, and its secret protocols, which allowed two totalitarian regimes that shared the goal of world conquest to divide Europe into two zones of influence.

The actual history is: Stalin had been begging the UK to ally with the Soviet Union to defeat Hitler; and, after being snubbed each time, joined with Hitler in order to prevent an expected invasion by Hitler against the Soviet Union. It was an act of desperation by Stalin, which was forced upon him by the UK. And, now, the U.S. and its allies rewrite ‘history’ to make the Soviet Union their enemy during WW II, instead of their savior — as they actually were.

The U.S., in a sense, has adopted not only many ‘former’ Nazis, but the mantle of German Nazism — not as regards Jews, but as regards Russia and world-conquest in general: America is the world’s leading aggressive and imperialist nation. The EU is an important part of that operation and thus now equates Russia with Nazism instead of with having conquered the Nazis. Authentic European democrats will therefore abandon alliances with the imperialistic U.S., and will recognize — and honor the fact — that Russia is an important part of Europe, and was the main source of the victory against Nazism. Only then will the Cold War, which Truman started, and which George Herbert Walker Bush and his successors continue, finally end. And, by abandoning the fascist U.S. empire, Europeans will finally break the back of imperialism; and, maybe, ultimately establish what had been FDR’s dream, of a truly meaningful U.N.
All of this goes back to the plan which was first stated in the 1877 version of the Will that was written by the racistly English aristocrat and champion of English imperialism, Cecil Rhodes. The plan was for England to retake the U.S. through subversive means and then use U.S. power in order to expand the U.S.-UK empire throughout the world. Taking control of Europe would be an important step. There is a good summary presentation, on the Web, of this Deep State background to Monnet, which is titled “The New World Order And the European Union”. In at least a general sense, Rhodes seems to have seen it all coming, and he very skillfully set up the Rhodes Trust and (less directly) other organizations, so as to bring it about. It’s as if he was a super-master chess-player on the global political chessboard, and the public are mere pawns to the global aristocracy that he organized during the late 1800s.

Investigative historian Eric Zuesse is the author, most recently, of  They’re Not Even Close: The Democratic vs. Republican Economic Records, 1910-2010, and of  CHRIST’S VENTRILOQUISTS: The Event that Created Christianity.
Up to You.