Syria declares its independence from US/Western regime change addicts. As you read this article keep these things in mind please:

1) Syrian people are not stupid. They know their country far, far, far better than you or I do. They understand their severe, complex and often deeply rooted problems. They have varying ideas and opinions about all of it – the war, the economic hardships they’re experiencing now, reforms they want in the government, etc.

2) Syrian people are not isolated. They have,  and have had, full open access to the entirety of the internet and social media. Many speak two or more languages. They know everything that has been said about their country, their leader and their army. Every accusation. Every denouncement by every western official. Every “war sells news so news sells war” establishment media report.

It’s true that the presidential election happening today in Syria is not an example of pure western style democracy. The Syrian people aren’t choosing in the “whoever raises the most money wins” American-style electoral process which results in our citizens having to decide between the likes of mobster/monster Hillary Clinton and schizophrenic used car salesman Donald Trump, or Donald Trump vs the ages-old establishment hack Joe Biden.

The election in Syria was rushed, with two not very oppositional candidates running against Bashar al-Assad, and everyone has known full well who would win. America is bitching and moaning because they weren’t able to get a Syrian “Juan Guaido” type CIA shill in the door. 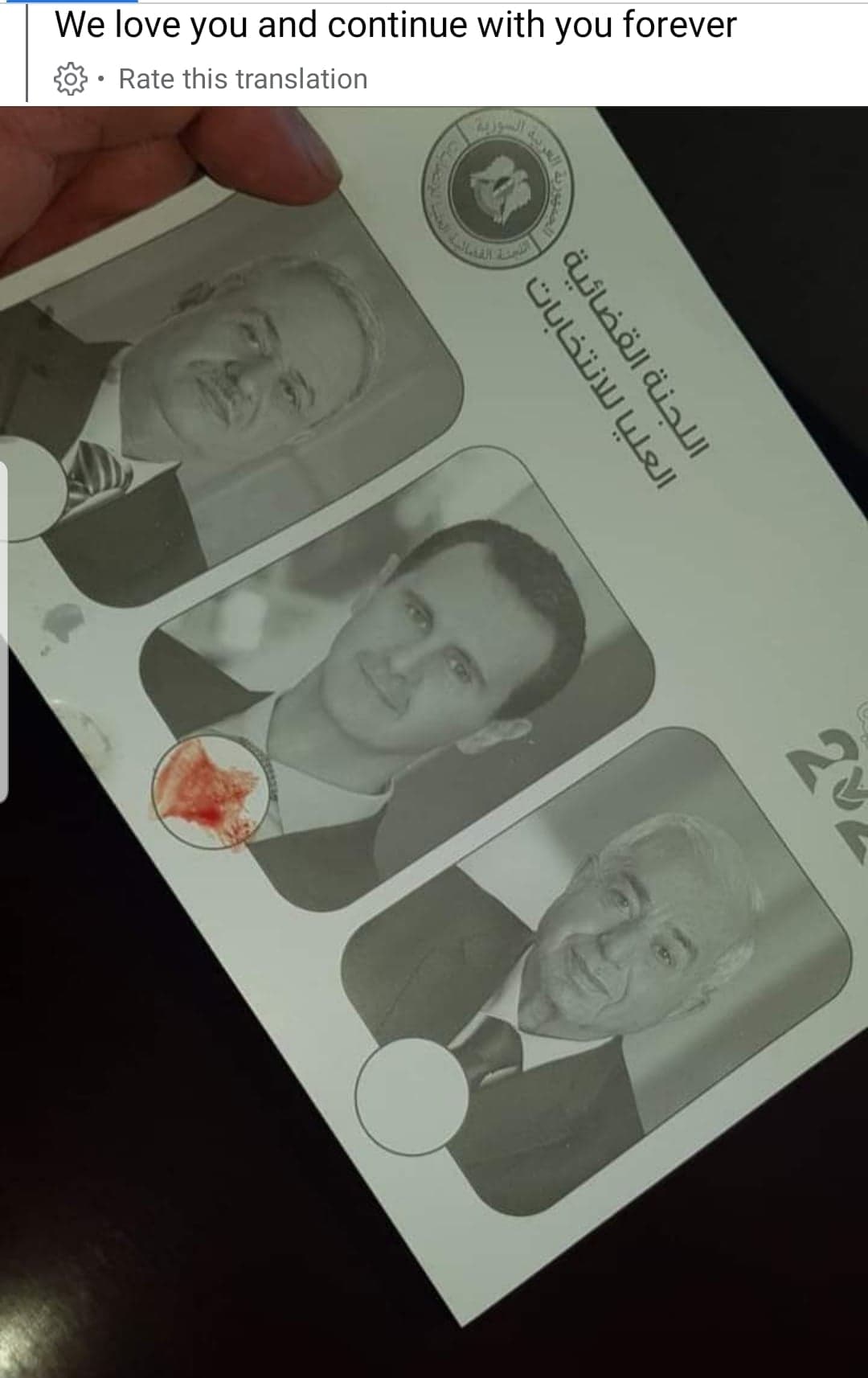 Support for President Assad among Syrians from all the many and diverse people groups – religious, ethnic, political – is strong. In my seven extended trips, traveling around most of the country on my own with Syrian friends as guides from 2016 through 2019, that much was immediately obvious and pretty evenly spread.  That support ranges from total outright devotion and love through the pragmatic to the bitter. Think of the spread here – of the near worship among some Trump or Obama supporters all the way to those who grudgingly supported one or another considering them to be the lesser of two evils.

In my opinion, what is important about the election is this – the Syrian people have made their choice; have rejected the regime change attempt by the same countries that destroyed Iraq, Afghanistan, and Libya. The same countries savagely killing and starving Yemen.

The Syrian people have seen and experienced every kind of hell imaginable and the ones who survive say NO. No to the GW Bush/Dick Cheney neocons. No to Obama/Hillary/Kerry war mongering liberals. No to Trump’s “say one thing and do another” foreign policies and actions. No to Biden’s many-decades long love of war and lies. No to the punishing sanctions starving their economy and limiting rebuilding. No to the terrorist and mercenary proxies. No to the illegal invasions and occupations.

They are saying, “Syria is OUR country – not yours. Get your filthy, greedy, bloody, hypocrites’ hands off it.”

Their country has been ravaged. Attacked without mercy. Slandered. Accused. Misrepresented. Beaten, looted, raped, and bombed. Hundreds of thousands are dead. Millions have left. Nearly half the population has been displaced from their homes over the course of this crisis. The middle class was thriving before the war – now it is almost non-existent and many are starving. Religious harmony was the norm – now there is much distrust. Women were empowered – now so many are widows or mothers who’ve lost their children.

This regime change attempt by the US, UK, France, Israel, Saudi Arabia, Turkey and Qatar (along with other western and regional lackey states) is nothing short of a war crime on a scale which demands a Nuremburg type trial for the perpetrators – the entire thing. The media has been often criminally complicit and many journalists, editors, managers and producers should also be on trial for knowingly aiding and abetting terrorist groups. The rest of the media have just behaved like the government/establishment stenographers and ignorant mob they are. All of it masked, covered over, by “WMD’s in Iraq” style lies and propaganda.

This was never a war against the leader of Syria – it has always been a war to try to bring Syria to its knees, for it to submit to western control including rolling over for Israeli expansionism, or be torn apart.

That is the vote today. And Syrians have voted NO loud and clear – Syria will not submit to the dictatorship of the US/Israel and allies – all the war mongers and profiteers – over its alliances, sovereignty and independence.

It’s not really Election Day – it’s Victory Day – hard fought and hard won. Though neither fight nor victory is totally complete yet, it will be.

Well done Syria. You’ve shown the world what it takes to stand up to bullies and have shaken powers that thought themselves unshakeable. It’s cost you so dearly; may the future be better and more hopeful. The work ahead will be hard too, so very hard and difficult solving all the problems, but I believe in you to do it – I know you can do it.

I'm an independent researcher and writer regarding the Middle East, particularly Syria. I've traveled throughout much of Syria in five, month-long trips, usually on my own with Syrian friends as translators and guides. Have also spent almost 7000 hours researching the country and conflict over the past five and half years.

Massacre? What Massacre? Deconstructing Tienanmen, the lie that never goes away