The hybrid war against China (and Russia) signals preparations for further aggressions against those countries. It's the usual Western playbook: character assassination, followed by the unleashing of the jackals.

September 21, 2021
Our articles depend on you for their effectiveness. Share with kin, coworkers and friends.

The moral rot in the West, radiating from Washington and London, permeates every nook and cranny of its member nations, especially the Anglo-Saxon core. 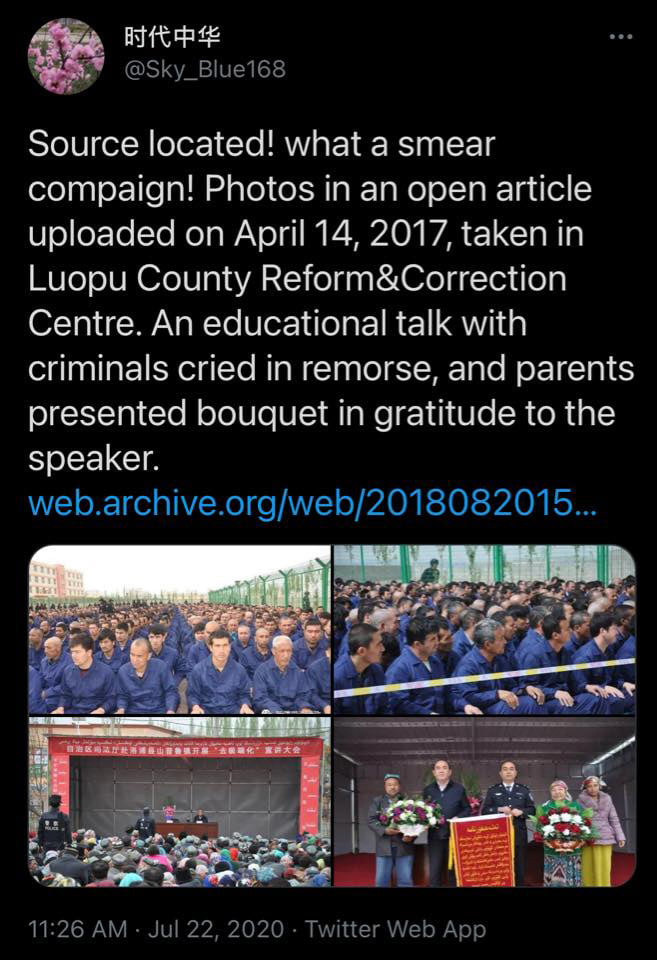 Regular inmates at a prison are described as Uyghur political prisoners.

The West has been literally swamped by a non-stop propaganda offensive about Uyghur forced labor camps – thoroughly debunked, for instance, here. Now let’s examine the other – Western – side of the story.

In early 2021, Defense for Children (DCI) took the Australian Strategic Policy Institute (ASPI) to court in New South Wales. DCI’s lawsuit charges that ASPI may have been receiving funds from a number of weapons manufacturers and government agencies in the US and UK profiting from prison labor.

Although lawyers for ACPI assured these funds would be cut off if any serious evidence surfaced, the case got murkier, and there are doubts it will ever go to trial.

So why is this so important?

Like many of its peers in the Five Eyes constellation, the Australian Strategic Policy Institute (ASPI) bills itself as an “independent, non-partisan think tank”.

ASPI, based in Canberra, was founded in 2001 – the year of 9/11. Its funding comes from a mixed bag of Australian institutions, especially the Australian Department of Defense, as well as “overseas government agencies”, including the US State Department, the Pentagon and even NATO, which financed a quirky “social media research project”.

The US industrial military complex is well represented by Lockheed Martin, Northrop Grumman and Raytheon. Other NATO stalwarts like BAE Systems, Thales and Saab also show up.

The bottom line is that like reams of other Five Eyes think tanks, ASPI is directly funded by corporate Weapons Inc..

ASPI had at least 56 sources of income in 2018-19 – blandly described as either “sponsorships” or “commissioned income.” Yet what raises eyebrows is that a significant part of these funds from at least 11 donors can be directly and indirectly tied to prison labor, which is equated all across the industrialized West as modern slavery. 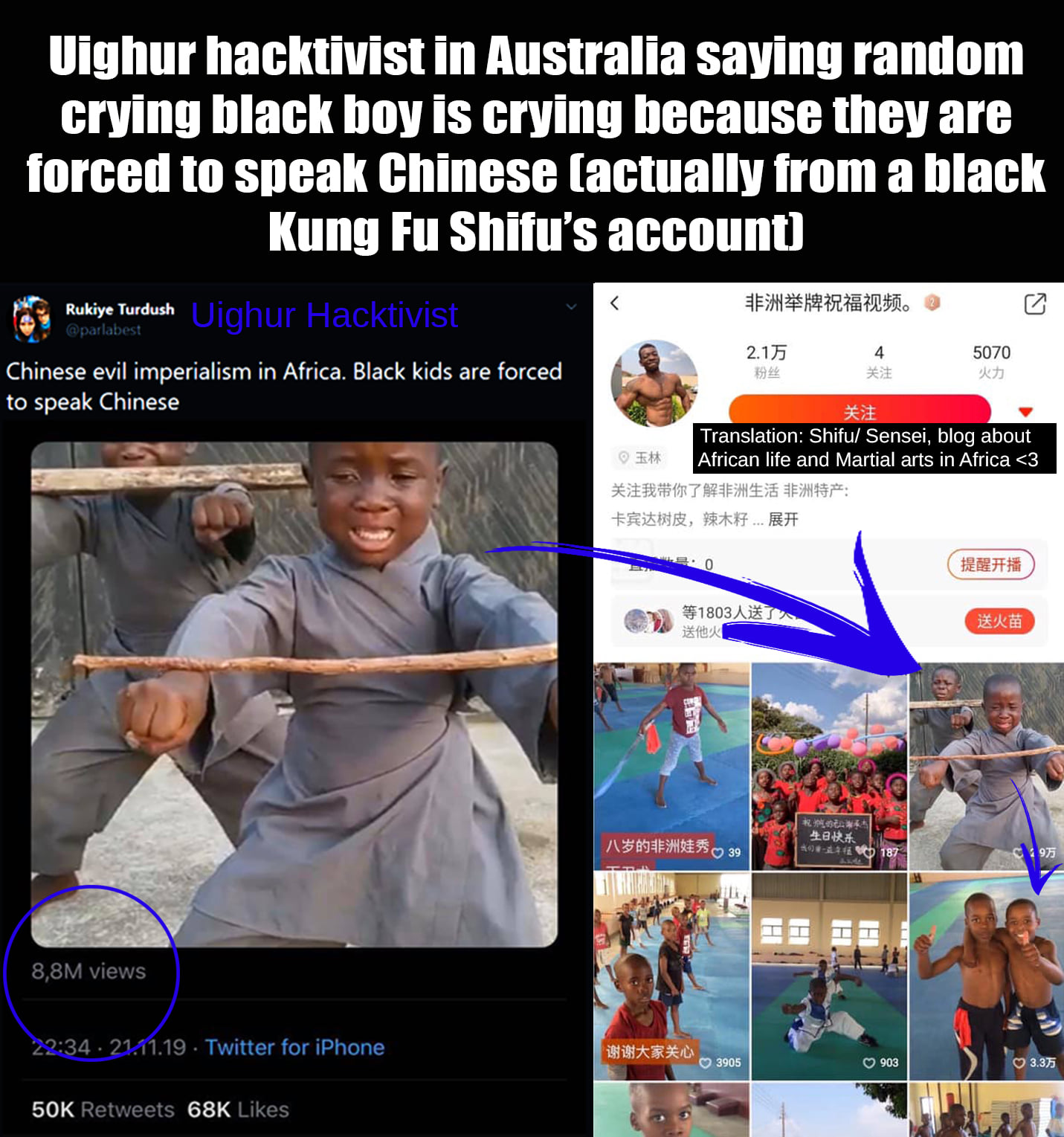 This, and the previous photo above, are part of the images circulated by the CIA around the world to demonise China.

At least 4 ASPI donors – Lockheed Martin, Boeing, Raytheon and BAE Systems – have been connected to the use of prison labor in manufacturing components for their military hardware.

Raytheon, for instance, may have exploited prison labor directly for the assemblage of electronic parts for surface-to-air Patriot missiles. A report showed how “it costs prisoners 23 cents an hour to make parts for the missile”, and prison management is entitled to withhold some or all of the prisoners’ wages at will.

The US federal report on prison labor actually states, unambiguously, that “all able-bodied sentenced prisoners” are required to work. The operative word is “required”.

UNICOR, which operates no less than 110 factories in 65 federal prisons, is blandly described as the trade name for the Federal Prison Industries (FPI) in the US, a “self-sustaining government corporation that sells market-priced services and quality goods made by inmates”. Including, of course, weapons for the industrial-military complex.

According to 2019 figures, the US government – which de facto operates the prison factories – funded ASPI with $1.37 million.

Unisystems, an IT firm that sells interphones for US prisons, also funded ASPI from 2005 to 2019. Inmate labor may be dirty cheap, but if they want to place a call to their lawyers or their family they need to shell out up to $24 for 15 minutes.

BAE Systems funded ASPI between 2014 and 2019. BAE Systems profits from components made by prison labor in the aerospace system of the notorious Bradley Infantry Fighting Vehicle.

Compounding the picture of a Five Eyes system weaponizing and profiting from serial disasters for years in Afghanistan, the Australian military have also been exposed to serious scrutiny.

On November 2020, Australian Defense Force commander Angus Campbell confirmed Australian Special Forces have been involved in serious crimes in Afghanistan. A long-running inquiry recommended that 25 soldiers, most within the elite SAS, should be investigated for a handful of cases leading to the assassination of 39 Afghan prisoners, including civilians – women and children -, as well as torture of 2 others.

As if accusations of Australian soldiers committing murders in Afghanistan while corporate donors to an Australian outfit profit from prison labor was not a toxic enough mix, the overarching twist is that ASPI happens to be regarded as the most authoritative, “independent” source for Chinese matters in Australia.

Similar to its American counterparts, ASPI as a branch of Weapons Inc. pursues a clear agenda. One vector churns out hefty literature demonizing China – complete with detailed Uyghur “forced labor” reports – and actively promoting the specter of a “China strategic threat”.

The other vector lobbies – what else – for increased defense spending especially in missiles. That’s Quad territory (US, Japan, India, Australia). Quad needs to contain China at all costs.

And that’s what qualifies ASPI as a de facto lobby for Weapons Inc., much more than a think tank.

It gets curioser and curioser when one learns that the Australian government wants to equip itself with the AGM-158C Long Range Anti-Ship Missile (LRASM) manufactured by none other than ASPI donor Lockheed Martin.

So have fun with our little Five Eyes tale, where an Australian “think tank” focused on demonizing China 24/7 gets some of its financial kicks from a Weapons Inc. handsomely profiting from Western prison labor.