It's like Amazon owning the roads it delivers packages on 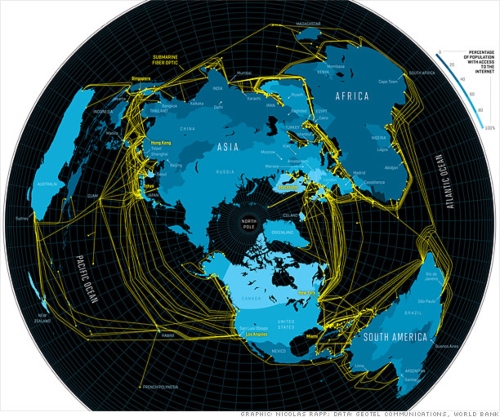 It might seem an exaggeration to say that Big Tech, like a fictional James Bond villain, aims for total world domination through controlling the internet. But fantasy and reality are coming to pass.

Not only are the tech giants the gatekeepers of today’s public square, but they are increasingly gaining control of the enormous web of physical connections that link almost all the world’s data centres and server warehouses. This backbone enables all those computerised 1s and 0s to be transformed into the economic, social and cultural experiences of the 21st century.

The internet might seem ethereal. The move towards the metaverse strengthens the illusion that a virtual space, rather than a physical one, will primarily dominate the decades to come. But all our internet experiences occur because pulses of light miraculously travel inside more than 400 fiber-optic cables stretching over 1.3 million kilometres (800,000 miles) buried underwater – enough cable to go around the earth 32 times. Without this physical infrastructure, the metaverse, indeed everything we now depend upon in modern society, would not exist.

Most people are unaware that in less than a decade, Microsoft, Google parent Alphabet, Meta (formerly Facebook) and Amazon have become by far the dominant users of the world’s undersea cables. Before 2012, their share was less than 10%. Today, that figure is about 66%.

And this is just the start. As the Wall Street Journal points out, in the next three years, they are on track to become the primary financiers and owners of the web of cables connecting the wealthiest and most bandwidth-hungry countries on the shores of both the Atlantic and the Pacific. By 2024, they will have an ownership stake in more than 30 long-distance undersea cables. In 2010, these companies had an ownership stake in only one – the Unity cable partly owned by Google, connecting Japan and the US.

The involvement of these companies in the cable-laying industry should not be understood in any conspiratorial sense. They are driven primarily by economics. The insatiable appetite for more terabytes of bandwidth has meant they have had to meet this demand and reduce the costs of transmitting data across the oceans. And they have done so: According to TeleGeography’s annual report on submarine cable infrastructure, their actions increased capacity by 41% in 2020 alone.

This has been impressive and unprecedented. But it also reveals something new about the power of Big Tech. In the past, trans-oceanic cable laying required the resources of governments and their national telecom companies. But these costs are small change for today’s titans: In 2020 alone, Microsoft, Alphabet, Meta and Amazon poured more than $90 billion into capital expenditures.

By building their cables, the tech giants are saving themselves money over time that they would have to pay other cable operators. However, because they are not selling bandwidth but using it for their services – which also allows them to escape being regulated as telcos – the tech companies don’t need to operate their cables at a profit for the investment to make financial sense. They have transformed the business model for the critical infrastructure of the 21st century.

This is both good and bad news. The good news is that most of the Big Tech cables are collaborations among rivals. The Marea cable, for example, which stretches approximately 6598km

(4,100 miles) between Virginia Beach in the US and Bilbao, Spain, was completed in 2017 and is partly owned by Microsoft, Meta and Telxius, a subsidiary of Telefónica, the Spanish telecom. While this will enable Amazon, for example, to stream millions of HD movies simultaneously, it also helps ensure that more redundancy is built into the backbone. This helps to keep the internet humming when a cable is severed or damaged – which happens 200 times a year apparently – and thus provides security to all internet users.

The ability of these companies to vertically integrate down to the level of the physical infrastructure of the internet itself is good news for the users of their services. It reduces their costs for delivering Google search results, Facebook’s social networking services and Amazon and Microsoft’s cloud services.

The bad news is that this self-serving behaviour, despite its positive impact on the global economy, helps concentrate Big Tech’s control over this critical infrastructure. By owning its own lanes on the superhighway, Big Tech has even more power to restrict competition and, more importantly, determine who will be allowed to travel there as well.

This is analogous to Amazon owning the roads where packages are delivered. Just remember the aftermath of the US Capitol riots in 2021: Not only was an elected president removed from Twitter and Facebook by Silicon Valley’s unelected tech barons, but Parler, a rival social media service, effectively went offline when Apple took it off the App Store, Amazon suspended its web hosting service, and Google booted the platform off its Play Store.

The privatisation of the backbone of the internet should be a wake-up call. The power of these super-rich, unelected and unaccountable corporations is historically unprecedented. They can prevent competitors from travelling the superhighway (as non-telcos, they have no common carrier obligations). But, as they have already demonstrated, they also can control what can be said or who can participate in the modern public square. A cheaper, more resilient internet is not a price worth paying for the threat this poses to the future of free speech, democracy, and innovation.

Norman Lewis is a writer, speaker and consultant on innovation and technology, was most recently a Director at PriceWaterhouseCoopers, where he set up and led their crowdsourced innovation service. Follow him on Twitter @Norm_Lewis

Eurasia’s Ring of Fire: the Epic Struggle Over the Epicenter of U.S. Global Power

The Other Side of the Story: Russia’s view on Geopolitics, War and Energy Racketeering