“Chinese Aggression” Sure Looks An Awful Lot Like US Aggression

January 24, 2023 11 minutes read
Be sure to distribute this article as widely as possible. Pushing back against the Big Lie is really up to you. 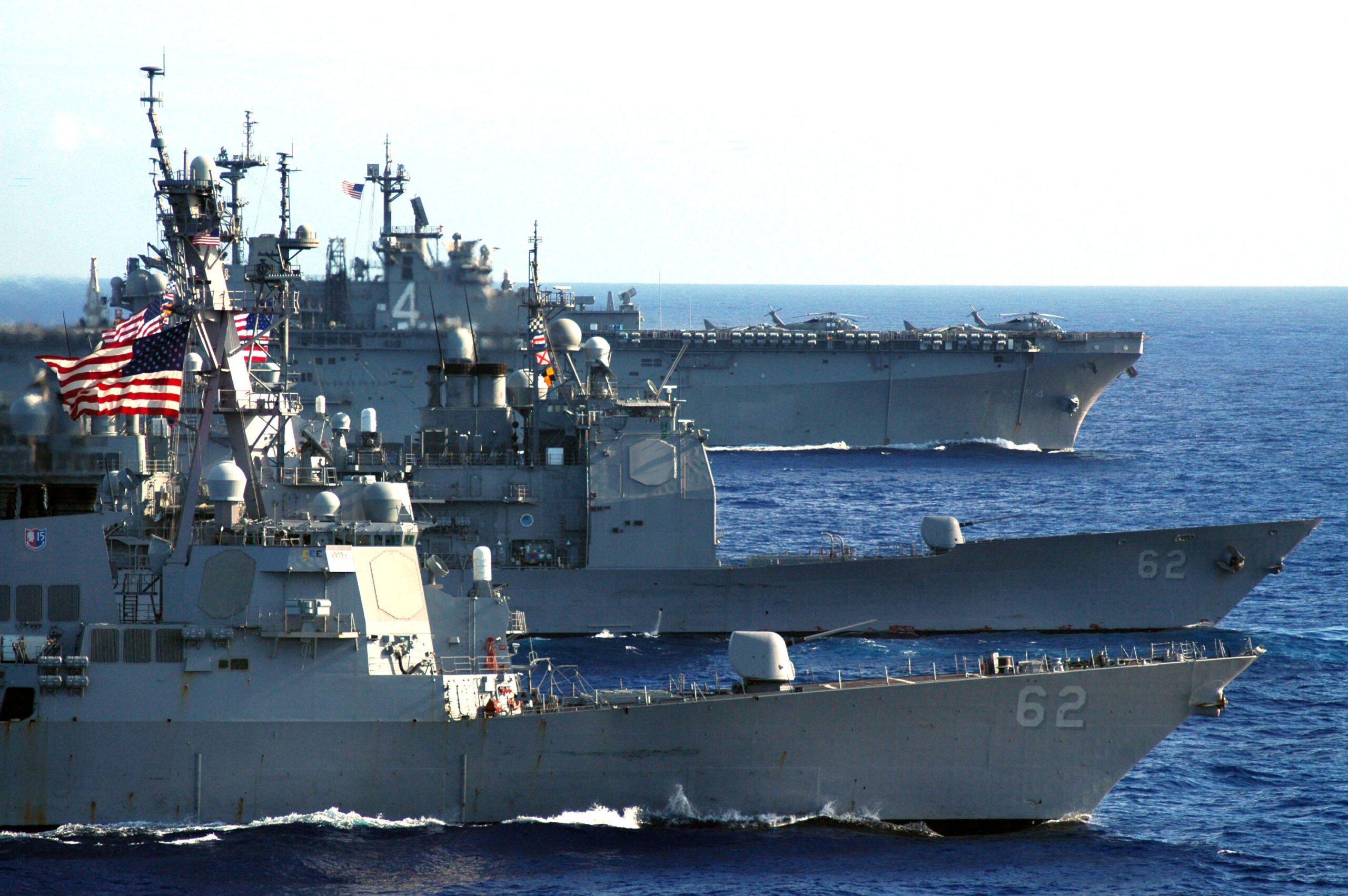 Punchbowl News reports that House Speaker Kevin McCarthy is planning a trip to Taiwan, which will be yet another incendiary provocation against Beijing if it occurs. The previous House Speaker, Nancy Pelosi, sparked a significant escalation in hostilities with her visit last year, the consequences of which are still reverberating today.

Pelosi’s visit to Taiwan was viewed in Beijing as a major provocation, and it sparked the largest-ever Chinese military drills around the island. The exercises included China firing missiles over Taiwan and simulating a blockade of the island, both unprecedented actions.

China has kept up the military pressure on Taiwan since Pelosi’s visit, and its warplanes regularly now cross the median line, an informal barrier that divides the two sides of the Taiwan Strait. Before Pelosi’s trip, China barely crossed the line. Now, it’s an almost-daily occurrence.

Beijing views the US House speaker visiting Taiwan as an affront to the one-China policy and the understanding the US and China reached in 1979, when Washington severed formal relations with Taipei.

US-led provocations and escalations against China are becoming a regular occurrence, both from the US itself and from its imperial assets like Australia and Taiwan. Yet according to the western political/media class, the urgent threat of our day is “Chinese aggression”.

After the House of Representatives voted to approve the new Select Committee on China — a Republican initiative designed to increase internal pressure in the US government to ramp up the new cold war — the committee’s chairman Mike Gallagher put out a statement saying that it is “time to push back against the Chinese Communist Party’s aggression in bipartisan fashion.”

Gallagher is a particularly noxious warmonger who says urgent efforts must be made to stop China from “destroying the capitalist system led by the United States in order to make way for the triumph of world socialism with Chinese characteristics.” He advocates the “selective decoupling” from specific sectors of the Chinese economy and says the US is in “the early stages of a new cold war” against China. He advocates pouring weapons into Taiwan in much the same way the US did in the lead-up to its proxy war in Ukraine, and asserts that the US needs to be preparing for a direct hot war with China in the near future.

Gallagher’s hawkishness on China is quickly becoming the mainstream consensus position in the western political/media class as the US-centralized empire ramps up aggressions while continually complaining about Chinese aggression.

The Select Committee on the CCP will expose the CCP's strategy to undermine American leadership and work on a bipartisan basis to identify common sense approaches to counter CCP aggression.

There is no more critical challenge facing our nation. pic.twitter.com/eCXZzOtK7G

The US empire has been increasingly positioning its war machinery around China since the Obama administration’s “Pivot to Asia” in ways that would have led to an immediate third world war if the roles were reversed, and its aggressions have escalated with each subsequent administration. Just in the last couple of months we’ve had news that the US is planning on returning to its Subic Bay base in the Philippines as part of its encirclement campaign against China, and also intends to station missile-armed marines along Japan’s Okinawa islands. The US is also reportedly working on building a network of missile systems on a chain of islands near the Chinese mainland, explicitly for the goal of countering China. The US and its allies have dramatically increased their naval presence in disputed waters near China, viewed as acts of aggression by Beijing.

None of this would be tolerated by the United States if China were openly moving its war machinery into adjacent areas with the stated goal of “countering the US”. If China were doing this, it would be a near-unanimous consensus throughout the western world that China was engaged in hostile provocations and was clearly the aggressor. Nobody would listen to China if it claimed it was militarily encircling the US for defensive purposes.

But that’s exactly what happens with US aggressions against China. It’s just taken as matter of fact when the US says it’s moving more and more war machinery into the waters around China as a defensive precaution to deter Chinese aggression. Because the narrative is coming from the most effective propaganda machine ever devised, we hear “No bro, the US is militarily encircling its number one geopolitical rival on the other side of the planet defensively. Because like what if China tries to do something aggressive?”

In a surprisingly decent Foreign Affairs article titled “The Problem With Primacy,” Van Jackson argues that the US is behaving in such a transparently aggressive manner toward China that it can’t possibly claim to be acting in the interests of preserving peace and stability in the region.

“This is not the rationale of a country that is simply balancing Chinese power or trying to stop Beijing from creating a sphere of influence,” writes Jackson of the recent US semiconductor export ban against China. “It is not the strategy of a state trying to decouple from the Chinese economy. It is containment in all but name.”

“The Pentagon has promised that 2023 will be ‘the most transformative year in US force posture in the region in a generation,’ a line likely meant to be reassuring but that comes off as ominous,” Jackson writes. “The Department of Defense is making good on this promise by modernizing its large traditional presence in Northeast Asia while increasing its footprint in the Pacific Islands and Australia—areas that the Chinese military cannot seriously contest.”

Jackson argues that Washington’s efforts to halt China’s rise will likely achieve nothing besides provoking China into militarizing against it, saying, “There is no reason to believe that spending over a trillion dollars modernizing the U.S. nuclear arsenal or selling submarines to Australia will cause China to do anything but continue arming itself as quickly as possible.”

This aligns with the warnings of an anonymous US official cited in a November article by Bloomberg, who said that “the hawkish tone in DC has contributed to a cycle where the US makes the first move, interprets Chinese reactions as a provocation, and then escalates further.”

It’s the US making the first move every time.

Why does China keep aggressively surrounding itself with US military bases? https://t.co/LntfZXg8Vv

Taiwan is an odd case because empire apologists will openly tell you that Beijing must never control the island as it’s a geostrategically crucial location with essential semiconductor manufacturing, and then turn around and still try to tell you that Washington’s interest in Taiwan is because it wants to protect freedom and democracy. It’s even more transparent than when they were pretending to yearn for the liberation of nations that just so happened to sit on a lot of oil.

I don’t know if Beijing will ever launch an attack on Taiwan or some other future flashpoint, but if it does it seems a safe bet that it will be because the US empire kept ramping up aggressions and provocations until it got to the point that China felt it was losing more from inaction than it would from action. And then empire apologists will spend all day shrieking at anyone who tries to talk about those provocations.

Because that’s the rule now, if you weren’t aware. As of February 2022 we’re all meant to pretend that the concept of provocation is not a commonplace idea that everyone understands and learns about as children, but that “provocation” is rather a nonsensical propaganda word that was invented by Vladimir Putin last year. It is now no longer permissible for you to talk about the aggressions that led up to a nation going to war; we must all pretend that history began the day their troops crossed the border.

History is being re-written with Ukraine, and if war erupts over Taiwan it will probably be re-written there as well. But note to the future: the road to war was paved by mountains of US aggression.

My work is entirely reader-supported, so if you enjoyed this piece please consider sharing it around, following me on Facebook, Twitter, Soundcloud or YouTube, throwing some money into my tip jar on Ko-fi, Patreon or Paypal, or buying an issue of my monthly zine. If you want to read more you can buy my books. The best way to make sure you see the stuff I publish is to subscribe to the mailing list for at my website or on Substack, which will get you an email notification for everything I publish. Everyone, racist platforms excluded, has my permission to republish, use or translate any part of this work (or anything else I’ve written) in any way they like free of charge. For more info on who I am, where I stand, and what I’m trying to do with this platform, click here. All works co-authored with my husband Tim Foley.

IF YOU CAN’T WIN ON THE BATTLEFIELD, GET THE MEDIA TO PUBLISH FANTASY