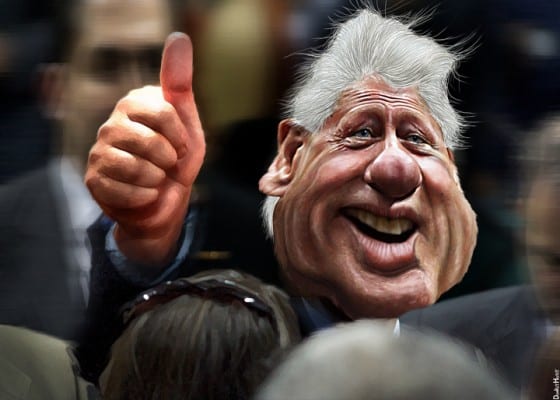 “Slick Willie”—the male part of the criminal duo. As usual, the Right hates him for all the wrong reasons. There are plenty of good reasons to despise him. (Image by DonkeyHotey.flickr)

She’s unabashedly hawkish. Earlier articles called her a war goddess. In 1999, she urged Bill to bomb Belgrade. “What do we have NATO for if not to defend our way of life,” she blustered.

Straightaway post 9/11, she urged waging war on terror. She supported Bush and Obama’s worst crimes. She endorses nuclear weapons use. She calls them peacekeeping deterrents.

As a 2008 presidential aspirant, she told AIPAC convention participants America “stands with Israel now and forever.”

“I have a bedrock commitment to Israel’s security.” She repeatedly lies claiming Iran and Hamas call for Israel’s destruction. She threatened tens of millions of Iranians. She said as president, she’d “totally obliterate them (if they) consider(ed) launching an attack on Israel…” She wanted Gaddafi toppled. She urged genocidal war to eliminate him. She publicly gloated saying “(w)e came. We saw. He died.” 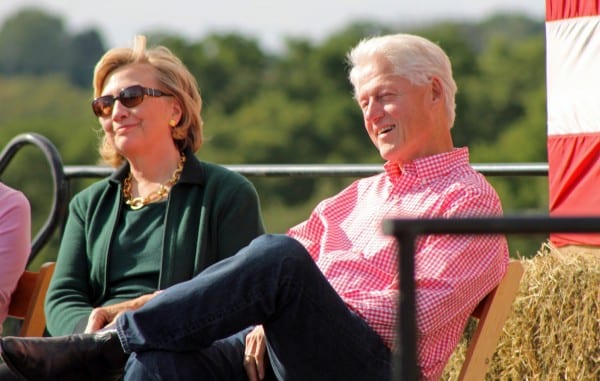 Ah…life is good. Who needs principles when you have the whore media to cover it all up?

She pushed for war on Syria to oust Assad. She represents the worst of America’s dark side. She favors police state harshness, corporate empowerment and permanent was. She deplores peace and stability. As president, she’ll likely wage greater war on humanity than Obama. She compares Russia to Nazi Germany. She lies claiming Putin’s aims are revanchist.

Earlier she said “his mission is to restore Russian greatness. When he looks at Ukraine, he sees a place that he believes is by its very nature part of Mother Russia.” She called him “a KGB agent. By definition, he doesn’t have a soul.”

“By definition,” she obsessively seeks unlimited wealth and power.   In 2001, she, husband Bill and Chelsea founded the Clinton Foundation – a profit-making enterprise masquerading as an NGO. Promoting Big Lies about “improving global health, increasing opportunity for women and girls, reducing childhood obesity and preventable diseases, (and) creating economic opportunity and growth…” Ludicrously claiming it “keeps score by the lives that are saved or improved.”  It’s an enterprise used to advance Hillary’s ambitions. The Wall Street Journal discussed it. On March 19, it headlined “Clinton Charity Tapped Foreign Friends.” 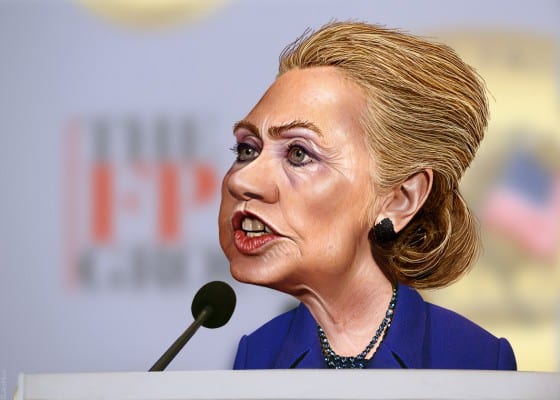 If anything, Hillary had more people fooled about her true nature than Bill. Ah those never-learning liberals!. They are now rallying behind a power-hungry, unprincipled corporatist whore. (Image by DonkeyHotey, flickr)

It “agreed not to seek donations from other governments, but (millions of dollars) kept flowing from individuals with connections to them.”  A foundation disclosure explained. “Some donors have direct ties to foreign governments,” said the Journal.

They include a Saudi royal family member and a corrupt Ukrainian oligarch/former Kiev parliamentarian. “Others are individuals with close connections to foreign governments that stem from their business activities,” said the Journal.

Over a dozen foreign influence peddlers were large foundation donors – after Clinton became Secretary of State in 2009. Records show they contributed up to $68 million. Some donors directly funded foundation projects valued at around $60 million.

“Like other global charities and nongovernmental organizations, the Clinton Foundation receives support from individuals all over the world because our programs are improving the lives of millions of people around the globe.”

[dropcap]A[/dropcap]s a presidential aspirant, critics claim a potentially serious conflict of interest accepting millions of dollars from foreign governments she’d have direct dealings with if elected.

“The Journal tracked donations through foundation disclosures, watchdog reports and other media accounts,” it said. From 2009 – 2013, Kiev-based Viktor Pinchuk Foundation contributed at least $8.6 million. His wife is former Ukraine President Leonid Kuchma’s daughter. He began contributing to Clinton “charities” in 2006. In 2008, he committed $29 million to the Clinton Global Initiative over a five-year period.