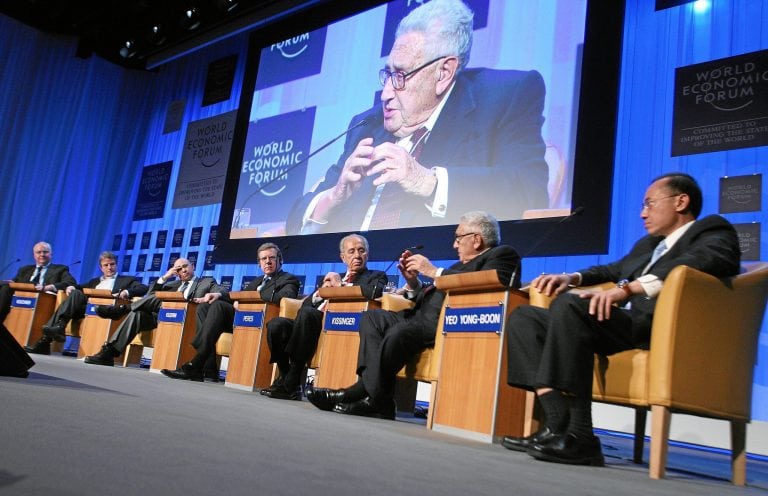 Next week will see some 2,500 bankers, hedge fund managers, corporate CEOS, government officials and celebrities descend once again on the Swiss Alpine resort of Davos for the World Economic Forum (WEF).

Paying $55,000 a head as the price of admission, one could well assume that the representatives of the financial and corporate oligarchy drawn to the annual meeting, and the lavish parties that accompany it, have a lot to celebrate.

The Bloomberg Billionaires Index published last month established that the fortunes of the world’s wealthiest 500 billionaires—many of whom will be in attendance—rose 23 percent over the past year, making them $1 trillion richer than at the end of 2016. And the obscene amounts of wealth keep rolling in, with the Dow closing at 26,000 Wednesday, recording its fastest ever 1,000-point rise.

Yet the principal report issued as the basis for the four days of meetings and closed-door discussions presents a picture of a global ruling elite living in mortal fear that growing economic and social crises, and, above all, the threat of world war and social revolution, may rob them of not only their fortunes, but their heads as well.

Titled “Fractures, Fears and Failures,” the WEF’s 2018 Global Risks Report includes subheads such as “Grim Reaping,” “The Death of Trade,” “Democracy Buckles,” “Precision Extinction”, “Into the Abyss”, “Fears of Ecological Armageddon” and “War without Rules.”

The report was drafted in conjunction with a survey conducted among nearly 1,000 banking and business executives, government officials and academics, which found that 93 percent of them feared a worsening of confrontations between the major powers in 2018. Fully 79 percent foresaw a heightened threat of a major “state-on-state” military conflict. The report cited both the confrontation between the US and North Korea, which has created the greatest threat of nuclear war since the height of the Cold War, and the increasingly complex inter-state conflicts produced by Washington’s military intervention in Iraq and Syria.

The fears of global war are well-founded. Last month, US President Donald Trump presented his new National Security Strategy, targeting Russia and China as “revisionist powers” standing in the way of the US assertion of global hegemony, and outlining an aggressive first-strike nuclear war policy, including against adversaries using conventional or cyber weapons.

This policy has been further fleshed out by a draft Nuclear Strategic Posture document to be unveiled by Trump later this month calling for the development of new smaller and more “usable” nuclear weapons for deployment on battlefields in Eastern Europe and Asia, making a full-scale global conflagration all the more likely.

This year’s gathering at Davos—sealed off and surrounded, as always, by thousands of troops and police—will be overshadowed by the attendance of Trump, the first US president to make an appearance since Bill Clinton 18 years ago. Aides indicate that Trump intends to deliver his standard “America First” tirade to the final session of the gathering.

While Trump’s speech may provide a particularly crude rebuff to the official slogan of this year’s forum— “Creating a Shared Future in a Fractured World” —it will constitute only one of the more noxious symptoms of the unraveling of the entire previous framework for international economy and politics under the impact of capitalism’s deepening contradictions and the incapacity of the various rival capitalist state to create a new “shared future” or mend the world’s fractures.

The contents of the WEF risk report point to the deep and insoluble character of the crisis gripping global capitalism.

The document states that while “headline economic indicators,” i.e., the soaring rise in share prices that have fattened the portfolios of the Davos attendees, are positive, this only “masks continuing underlying concerns.”

“This has been the weakest post-recession recovery on record,” the report states, adding, “Productivity growth remains puzzlingly weak.”

The world capitalist economy, it continues, is beset by “unsustainable asset prices, with the world now eight years into a bull run; elevated indebtedness ... and continuing strains in the global financial system.”

In a section titled “Into the Abyss,” the document warns: “Against a backdrop of domestic and international political strife—and with economic policy-makers already operating in uncharted territory—the eruption of another global financial crisis could overwhelm political and policy responses. A systemic collapse of the sort that was averted in 2007-2008 could push countries, regions or even the whole world over the edge and into a period of chaos.”

In addition to “rising military tensions,” “military buildups,” “proxy conflicts” and multiple “flashpoints” threatening war, the document points to the danger of rising social tensions within every capitalist country.

“In many countries the social and political fabric has been badly frayed by many years of stagnating real incomes,” it states, pointing to figures illustrating decelerating wages and rapidly rising social inequality.

“High levels of personal debt, coupled with inadequate savings and pension provisions, are one reason to expect that frustrations may deepen in the years ahead,” the report states.

It also recalls the 2014 WEF Global Risk Report’s warning that one of the world’s greatest threats was a level of youth unemployment so high that it threatened to create a “lost generation.” The report notes dryly that in the four years since, this level has remained “broadly static.” It warns that with so many millions of young people without work, “generational clashes over fiscal and labour-market policies” may erupt.

Concern over explosive social divisions is coupled with a worried section dealing with the Internet, headlined “Digital Wildfires”. It decries “the intentional use of social media to spread misinformation,” i.e., exposures of the real conditions confronting working people in every country, as a challenge to “global governance.” The report welcomes measures taken by Google and Facebook, as well as governments, to crack down on the “disruptiveness of online misinformation” through outright censorship.

The political conclusions drawn by the report are particularly stark:

“Democracy is already showing signs of strain in the face of economic, cultural and technological disruption. Much deeper damage is possible: social and political orders can break down. If an evenly divided country sees polarized positions harden into a winner-takes-all contest, the risk increases of political debate giving way to forms of secession or physical confrontation. In these circumstances, a tipping point could be reached. A spiral of violence could begin, particularly if public authorities lost control and then intervened on one side with disproportionate force. In some countries—with widespread ready access to weapons or a history of political violence—armed civil conflict could erupt. In others, the state might impose its will by force, risking long reverberating consequences: a state ofemergency, the curtailment of civil liberties, even the cancellation of elections to protect public order.”

In other words, the world’s financial oligarchy is assembling in the exclusive and scenic Alpine resort of Davos to hold a frank discussion on the prospects for a new world war, the eruption of social contradictions into civil wars and the imposition of police state dictatorships.

What is described in the WEF report are conditions already emerging in the United States and every major capitalist country.

In 1938, on the eve of the Second World War, Leon Trotsky wrote of a capitalist ruling class that “toboggans with closed eyes toward an economic and military catastrophe.” While the WEF risk report suggests that at least some elements of today’s ruling elite see the catastrophe on the horizon, they are as powerless as their forebears of 80 years ago to prevent it.

This places the greatest urgency upon the working class formulating its own independent strategic response to the global capitalist crisis, based on the perspective of uniting workers of every country in the fight to reorganize society on socialist foundations.

ABOUT THE AUTHOR
Bill Van Auken is a senior analyst and editorialist with wsws.org, a Marxist publication.

Three Billboards Outside Ebbing, Missouri: A vengeful mother stands up to the local “patriarchy”