“Electoral politics doesn’t work. Duopoly power runs America. Republicans and Democrats reflect two sides of the same coin. Not a dime’s worth of difference separates them. Throwing out bums assures new ones. It happens every time…” 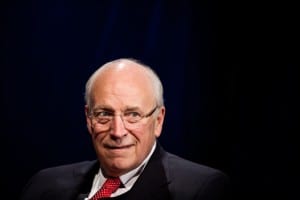 Cheney is just a more obvious example of the criminal shills who do the bidding for the reigning corporate plutocracy. People like the “liberal” Clintons do the same, with even more harmful effects to democracy, but are given a pass by most Democrats.

Charles Derber’s book by that title says it’s the only way to free America from corporate rule. It transformed America from “we the people” to what CEOs say goes.  It put monied interests in charge. Presidents, legislators, and high level bureaucrats serve them. Whatever they want they get. Institutionalized injustice follows. It’s longstanding. Vital change more than ever is needed.

America’s on a fast track to full-blown tyranny. It’s a hair’s breath away. Preventing it is top priority. It begins with knowledge. It involves knowing what’s at stake.

Collective activism has power. What better time to use it than now. America’s waging political, social, financial, and hot wars. It’s doing it globally. It’s happening at home and abroad. Constitutional protections are disappearing. America’s social contract is being destroyed.

Electoral politics doesn’t work. Duopoly power runs America. Republicans and Democrats reflect two sides of the same coin. Not a dime’s worth of difference separates them. Throwing out bums assures new ones. It happens every time.

Vital change is needed. Revolution is the only solution. Authority must be challenged disruptively. Doing so requires mobilizing it. Egalitarian reform is essential. Grass roots activism is key. Popular struggles depend on it.

Change occurs bottom up. It never comes top down. Dark forces relinquish nothing willingly. Concessions come when forced. Struggling for rights achieves them. There’s no other way.

Powerful interests run today’s America. They take full advantage. Absolute power corrupts them absolutely. They’re free to steal, plunder, exploit, accumulate wealth, and dominate. They do it at our expense.

Inequality is unprecedented. America the beautiful never existed and doesn’t now. Calling it a land of opportunity defies reality. Democratic freedoms are incompatible with predatory capitalism. Everyone’s on their own sink or swim.

Privileged few alone benefit. Others are used and abused. Adam Smith said nominal democracy should be “instituted for the defense of the rich against the poor.” It’s more than ever true today.

Corporatism is empowered. It rules the world. Military might supports it. Fundamental rights don’t matter. The world’s richest most developed country spurns them. It thumbs its nose at what matters most.

Human needs and welfare are sacrificed. Exploitation is institutionalized. American style democracy assures it. Michael Parenti calls it democracy for the few. It’s the best money can buy.

America’s wealthy class dominates. Ordinary people have no say. What democratic mandate directed government to transfer wealth to the privileged few? Why are ordinary people left out?

Why do corporate giants get huge handouts? Why are they licensed to steal? Why are wars fought to enrich them? Why are democratic freedoms compromised to serve them?

So is prioritizing justice, fairness, full employment, a minimum living wage, universal healthcare, free education to the highest levels, other vital social services, peace, and government by and for everyone equitably.

America’s current system failed. When disrobed and exposed to the light of day, America’s rulers have feet of clay. Their time has past. Social restructuring for everyone is needed. Mobilizing effectively can get it.

Regime change begins at home. A fundamental makeover is key. It requires ripping up political Washington from the roots and starting over. Nothing less assures change.

Democracy’s not a divine right. Getting and preserving it demands commitment. Out with the old. In with the new.

Hardship propels people to collective action. Mobilized disruptive power drives them. What better idea to build on. What better time than now.

The Independent Publishers of America chose his 2005 book “Hidden Power: What You Need to Know to Save Our Democracy” as one of three most important at the time.

He discusses how US regimes gain, hold and lose power. Current ones include corrupt politicians, Wall Street, war profiteers, and other corporate favorites.

Derber calls America’s government the “corporate regime.” He does so for good reason. Big business runs things. Money power is at the top of the pecking order.

Giant banks and financial institutions are more powerful than standing armies. They undermine freedom and social justice. They turn democracies into tyrannies. They wage wars for profit. They menace humanity in the process.

Clinton institutionalized “democratic integration into the corporate regime,” said Derber. He embraced traditional Republican objectives. He prioritized “globalization and free trade, zero deficits, small government, the end of welfare, and American Empire and continued militarization after the end of the Cold War.”

“Despite the challenge from grassroots and progressive Democrats, these are still core aims of the Democratic Party today.”

Influential insiders corrupted earlier principles. They “created a movement within the party. They severed Democrats from their New Deal past.”

“New Democrats” replaced old ones. Big money supports them. Party principles were redefined. Neoliberal harshness replaced New Deal liberalism.  Corporatism more than ever was embraced. What CEOs want they get. The worst of all possible worlds followed.

Gerber expresses hope. Corporate regimes eventually implode, he says. Usually it happens in a few decades. They do so by overreaching. They’re fundamentally anti-democratic, exploitive and repressive.

What can’t go on forever won’t. Corporate power isn’t omnipotent. For sure it’s not when committed people demand change. They get fed up and revolt. They do it one way or another.

When earlier corporate regimes collapsed, things improved. If history repeats, better times are possible but not sure. Derber expects either a more egalitarian society or deeper US-style fascism.

It’ll be wrapped in an American flag. It already is. It’s embedded in police state laws, scoundrel media managed news, academia, and hardline political opportunism. Stopping it is top priority before it’s too late to matter.

Americans “have the ability to (do so) if they understand the change and how to respond,” says Derber. They have more power than they realize.  Key is using it responsibly. It’s high time people understood and acted accordingly. Ugliness won’t end on its own. It needs committed shoving.

Stephen Lendman lives in Chicago. He can be reached atlendmanstephen@sbcglobal.net. His new book is titled “Banker Occupation: Waging Financial War on Humanity.”