Celebrating the Spirit of Envy 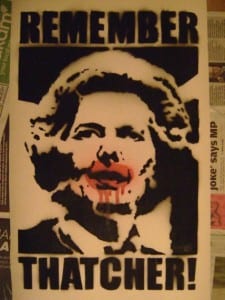 By Alastair McIntoshWhat most struck me last week about Boris Johnson’s speech canonising Margaret Thatcher and thereby, paving the way for his own beatification, was how deeply and intimately familiar it all sounded. Let me explain.I was born in Doncaster in 1955 and from 1960, raised and educated on the Isle of Lewis, the son of a Scottish (doctor) father and English (nurse) mother. In those days the doctor’s home and surgery was a social hub in the community for those who ran professional services on the island, many coming over from the mainland on brief visits as well as to shoot and fish. My sister and I therefore grew up with one foot in crofting culture and the other amongst the Masters of the Universe of the British establishment.

Their conversations were an important part of my early education. On the one hand you’d have crofter radicalism. On the other hand, old colonial hands who puffed on about our “losing the Empire”, the low IQ of the working classes, and of the blacks, and the Irish, and the worrying breeding habits of all three. What I therefore found so astonishing about Boris Johnson’s Thatcher speech last week (available in full on the Daily Telegraph website) was how it replicated a script directly out of that era.

It wasn’t so much IQ comments that so astonished me about the Boris speech. These views remain widely held by those who define what they think constitutes IQ but could never pass a Gaelic IQ test, with 70 different words for “endearment”. Rather, my astonishment fell on the comments of cuddly Boris (or is it “a nasty piece of work”?) about British imperialism, and how little this aspect was picked up on in subsequent reporting in the English press. To recap, Boris said:

To grasp what she (Thatcher) did, you have to remember how far we felt we had fallen. Our country – Britain – used to rule the world – almost literally. Of the 193 present members of the UN, we have conquered or at least invaded 171 – that is 90 per cent. The only countries that seem to have escaped were places like Andorra and the Vatican City. In the period 1750 to 1865 we were by far the most politically and economically powerful country on earth.

The source of these statistics a Daily Telegraph article a year ago headed: “British have invaded nine out of ten countries – so look out Luxembourg.” He goes on say – and let us remember that a free-booter is a pirate, a plunderer – that Mrs Thatcher:

… put a stop to the talk of decline and she made it possible for people to speak without complete embarrassment of putting the “great” back into Britain. And she gave us a new idea – or revived an old one: that Britain was or could be an enterprising and free-booting sort of culture, with the salt breeze ruffling our hair; a buccaneering environment where there was no shame – quite the reverse – in getting rich.

And from there to Boris’s apogee:

I don’t believe that economic equality is possible; indeed, some measure of inequality is essential for the spirit of envy and keeping up with the Joneses that is, like greed, a valuable spur to economic activity.

I don’t think Boris would have got away with making such comments in Scotland, a Scotland where, in the words of one of our national anthems by Hamish Henderson:

True, we Scots were sub-lieutenants in the Empire. But it’s not something we boast about today. The tragedy is that Boris only got away with it in England because the English radical voice has been so oppressed. Such neo-colonialism is parlour talk amongst his circles.

It left me thinking how I have two hopes for Scottish Independence. One is for Scottish self-determination, especially in the matters of socio-economic policy, foreign affairs and nuclear weapons. The other is for a reawakening of radical England. That won’t happen as long as English identity continues to hide, or be hidden, behind an artificial construct (read Linda Colley’s Britons) of Britishness.

Radical England? When my father, newly graduated in medicine after the war went down and became a GP in the mining village of Armthorpe just outside Doncaster, a close family friend, who subsequently married him and my mother, a Methodist pastor called Colin Morris. He later became head of BBC religious broadcasting. He wrote books with such titles as “Include me Out!” and, jointly with his close friend Kenneth Kaunda of Zambia, “Black Government?” and “The Riddle of Violence.”

Recently I read his anthology, “Bullet Point Belief”, and was thrilled to find in him an original English radical, equal to the best of the Diggers, Levellers, Ranters and early Quakers who were so brutally persecuted in the 17th century. Born in 1929 and still living, Morris was the son of an English coal miner but here, in a passage from p. 192 of the anthology, is a passage that I find speaks powerfully to Scotland. It’s called “Living by Hope.” I share it as a reflection on real England, and why Scotland goes it not alone.

I recall visiting Kenneth Kaunda in 1959 when he was in gaol. Squatting on the ground outside his cell, he was busy writing. He showed me page after page of diagrams. They were, he said, the structures of the various levels of government he intended to create when Northern Rhodesia became an independent Zambia. Most Europeans in the territory would have dismissed him as a crazy fantasist – Africans had no vote, few civil rights and only a tiny minority had schooling beyond the most elementary level. Yet a mere five years later, President Kaunda sat in the Governor’s old residence, State House, drawing up the legislation which would give effect to the system of government set out in those crude drawings. Africans have a capacity we westerners have lost for living expectantly in the present as though the future were already here.

Support for Alistair McIntosh’s fine piece from a very recent discovery (for me): “These things shall be” by Tom Sargant, first secretary of the law reform organisation Justice. “These things shall be” was written in 1942. His appeal then was to Britain as a whole, but with the likes of BJ setting the tone in England perhaps Scotland could be the nation that fulfils Sargant’s dream.

“We must have a revolt in Britain. We are already in the throes of its prelude. Not a revolt of hatred and violence … but a mighty upheaval in our social structure and in our national scale of values. What kind of revolt is it to be, if it is to establish freedom, social justice and full development within this land and lead to a new order without?

…. we ought by now to have some idea of what we want to do in Scotland [the original has ‘England’] and of the systems which would not work here. […] revolt must come, from causes which are inescapable. It must come whether we want it or not, because the people will no longer be fooled. They will find some way to smash the power of those who withhold the riches of the earth from them. They will not fight a second world war to make England safe for privilege.

Revolt must come because every individual and every community can reach a stage of self-deception and evasion of reality which leads to madness and breakdown. The intelligent and decent people of this country are weary of the prevarications, evasions and childish platitudes which have descended on them from high places. […] It must come because the signs of the times indicate that the old order is ending and that our civilisation is due to cast off its tawdry covering of profit-seeking, rivalry and exploitation, and to put on more dignified garments.”

Will The Hunger Games: Catching Fire“stir up” revolution?

The Dynamics of Nuclear Power Diplomacy: Russia and China vs...

Social-Democracy doesn’t fix capitalism, it just perpetuates it, notes The...

Let’s talk fundamentals: Why the EU is an imperialist capitalist...