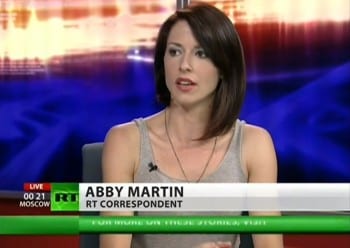 Even a sharp operator like Abby Martin was taken in by the Western propaganda fog.

Gerald Celente calls the Western media “presstitutes,” an ingenuous term that I often use. Presstitutes sell themselves to Washington for access and government sources and to keep their jobs. Ever since the corrupt Clinton regime permitted the concentration of the US media, there has been no journalistic independence in the United States except for some Internet sites.

Glenn Greenwald points out the independence that RT, a Russian media organization, permits Abby Martin who denounced Russia’s alleged invasion of Ukraine, compared to the fates of Phil Donahue (MSNBC) and Peter Arnett (NBC), both of whom were fired for expressing opposition to the Bush regime’s illegal attack on Iraq. The fact that Donahue had NBC’s highest rated program did not give him journalistic independence. Anyone who speaks the truth in the American print or TV media or on NPR is immediately fired.

Russia’s RT seems actually to believe and observe the values that Americans profess but do not honor.

I agree with Greenwald. You can read his article here:http://www.informationclearinghouse.info/article37842.htm Greenwald is entirely admirable. He has intelligence, integrity, and courage. He is one of the brave to whom my just published book, How America Was Lost, is dedicated. As for RT’s Abby Martin, I admire her and have been a guest on her program a number of times.

My criticism of Greenwald and Martin has nothing to do with their integrity or their character. I doubt the claims that Abby Martin grandstanded on “Russia’s invasion of Ukraine” in order to boost her chances of moving into the more lucrative “mainstream media.” My point is quite different. Even Abby Martin and Greenwald, both of whom bring us much light, cannot fully escape Western propaganda.

For example, Martin’s denunciation of Russia for “invading” Ukraine is based on Western propaganda that Russia sent 16,000 troops to occupy Crimea. The fact of the matter is that those 16,000 Russian troops have been in Crimea since the 1990s. Under the Russian-Ukrainian agreement, Russia has the right to base 25,000 troops in Crimea.

Apparently, neither Abby Martin nor Glenn Greenwald, two intelligent and aware people, knew this fact. Washington’s propaganda is so pervasive that two of our best reporters were victimized by it.

As I have written several times in my columns, Washington organized the coup in Ukraine in order to promote its world hegemony by capturing Ukraine for NATO and putting US missile bases on Russia’s border in order to degrade Russia’s nuclear deterrent and force Russia to accept Washington’s hegemony.

Russia has done nothing but respond in a very low-key way to a major strategic threat orchestrated by Washington.

It is not only Martin and Greenwald who have fallen under Washington’s propaganda. They are joined by Patrick J. Buchanan. Pat’s column calling on readers to “resist the war party on Crimea” opens with Washington’s propagandistic claim: “With Vladimir Putin’s dispatch of Russian Troops into Crimea.” http://www.informationclearinghouse.info/article37847.htm
No such dispatch has occurred. Putin has been granted authority by the Russian Duma to send troops to Ukraine, but Putin has stated publicly that sending troops would be a last resort to protect Crimean Russians from invasions by the ultra-nationalist neo-nazis who stole Washington’s coup and established themselves as the power in Kiev and western Ukraine.

So, here we have three of the smartest and most independent journalists of our time, and all three are under the impression created by Western propaganda that Russia has invaded Ukraine.

It appears that the power of Washington’s propaganda is so great that not even the best and most independent journalists can escape its influence.

What chance does truth have when Abby Martin gets kudos from Glenn Greenwald for denouncing Russia for an alleged “invasion” that has not taken place, and when independent Pat Buchanan opens his column dissenting from the blame-Russia-crowd by accepting that an invasion has taken place?

The entire story that the presstitutes have told about the Ukraine is a propaganda production. The presstitutes told us that the deposed president, Viktor Yanukovych, ordered snipers to shoot protesters. On the basis of these false reports, Washington’s stooges, who comprise the existing non-government in Kiev, have issued arrest orders for Yanukovych and intend for him to be tried in an international court. In an intercepted telephone call between EU foreign affairs minister Catherine Ashton and Estonian foreign affairs minister Urmas Paet who had just returned from Kiev, Paet reports: “There is now stronger and stronger understanding that behind the snipers, it was not Yanukovych, but it was somebody from the new coalition.” Paet goes on to report that “all the evidence shows that the people who were killed by snipers from both sides, among policemen and then people from the streets, that they were the same snipers killing people from both sides . . . and it’s really disturbing that now the new coalition, that they don’t want to investigate what exactly happened.” Ashton, absorbed with EU plans to guide reforms in Ukraine and to prepare the way for the IMF to gain control over economic policy, was not particularly pleased to hear Paet’s report that the killings were an orchestrated provocation. You can listen to the conversation between Paet and Ashton here: http://rt.com/news/ashton-maidan-snipers-estonia-946/

What has happened in Ukraine is that Washington plotted against and overthrew an elected legitimate government and then lost control to neo-nazis who are threatening the large Russian population in southern and eastern Ukraine, provinces that formerly were part of Russia. These threatened Russians have appealed for Russia’s help, and just like the Russians in South Ossetia, they will receive Russia’s help.

The Obama regime and its presstitutes will continue to lie about everything.

About Dr. Paul Craig RobertsPaul Craig Roberts was Assistant Secretary of the Treasury for Economic Policy (munder Ronald Reagan, of all things) and associate editor of the Wall Street Journal. He was columnist for Business Week, Scripps Howard News Service, and Creators Syndicate. He has had many university appointments. His internet columns have attracted a worldwide following. His latest book, The Failure of Laissez Faire Capitalism and Economic Dissolution of the West is now available.

Blessing in disguise: Ukraine may be the last straw—if it doesn’t kill us all

Quo Vadis? The Dangerous Memory of the Gospel

Our Rome/European correspondent, Gaither Stewart, has received the following note from a friend which we think worthy of publication (forgive some of his English typos). Gaither warns: “This is not much but a few words from a politically aware (though not healthy) Russian-Belorus-Polish Jew who worked in the US for 20 ears and got Nasevoll of those parts and has lived now sometime in Warsaw where he grew up & did university. A complex life. I met him in Paris a century ago, in another life.: “In my opinion members of [the] Polish government are not so concerned about Ukraine… Read more »