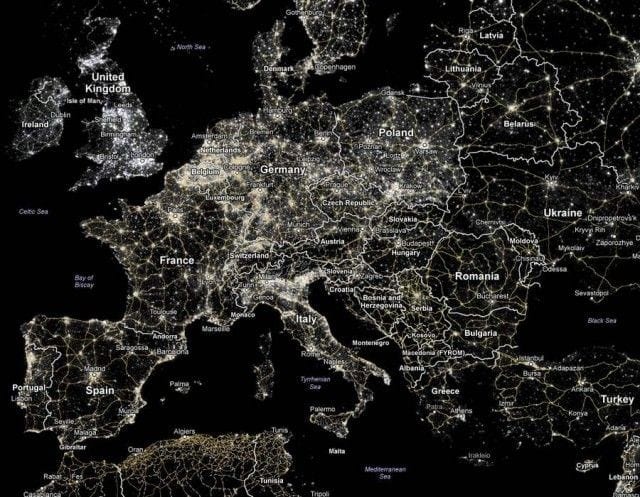 Europe is pregnant with something but what is it? War or peace? East or West? North or South? A still birth or a renaissance? The beginning or the end? Something has got to give. The past must let go.

The recent Italian elections are the latest birth pangs – the latest sign of something new. And the present European institutions aren’t part of it. Indeed the nation states that make up Europe today are slipping into the past while something else is moving forward.

The continent itself is fluid. In the fundamental social sense Africa and Asia have never been as close. And America has never been as far away. Europe in the classic sense is disappearing. And that’s not bad. The place at present feels like a bastard. It feels good.

In country after country the late 20th Century political blocks are turning into sand. And each economy is held together by dubious financial instruments and sinister anti-labor laws. Austerity and debt de-legitimize Euro capitalism. And promise Euro chaos. Bring it on.

If truth be told the “pro-European” liberals are the most ignorant of Europe. They’re the ones championing American leadership and playing Russian roulette with Russia nonstop. They’re the fanatical extremists that are endangering the life of Europeans today. Their market solutions and military solutions have taken Europe into an irrational swamp. A swamp in which the “far-right” makes more sense than the “extreme-center”.

Immigration is a scapegoat. But it is first and foremost the solution – the solution to low birth rates and labor shortages. Never mind the fact that diversity means dynamism. And the fact that “globalization” (the human kind) is now the norm. The white man like God is dead.

The bulk of the European 20th Century was shaped by the Communists, the Fascists and the Christian Democrats. They’re all gone now and in the vacuum there’s nothing but farce. But there’s the outline of something different.

The Europeans are pushing against liberalism and its neoliberal progeny. Never mind the fact that the new or alternative political parties they vote for are failing to live up to their critical manifestos. The point is that probably 50% or more of the Europeans have had enough of liberal capitalism. And this means that they have had enough of the EU. How this plays out though is anyone’s guess.

A glance at Europe’s political jigsaw right now reveals unstable contradictions. Hung parliaments, Grand Coalitions, secessionists and deadlock predominate. New or once ostracized political parties are shaping the narratives. And the strongest one is Euroscepticism.

And when you add to this mix old time anti-imperialists like Sinn Féin (Ireland) and new time imperialists like La Republique En Marche (France) the concept of Europe is being pulled all over the place. Brexit, Catalonia, Lega Nord (Italy) and the financial ultras in the Netherlands and Finland complete the picture of political chaos. Unity  – if there ever was any – is a thing of the past.

The Polish President Andrzej Duda summed it up best recently when he said that the EU is like an occupying force in Poland. It's not crazy to say that that’s exactly how most ordinary Europeans experience the EU today. And they want out. They want something new.

For wanting to halt liberal capitalism the “anti-European” Europeans are being described as idiotic populists or as the idiotic far-right. But this criticism doesn’t hold since it comes from a liberal European Empire that’s based on foreign wars and foreign slaughter. It comes from in other words a liberalism that is inherently racist. One that plays all the time upon popular fears (the war on terror, for example). It's a liberalism that has proven itself at home and abroad (austerity and war) to be not only idiotic but criminal in every way.

If truth be told the “pro-European” liberals are the most ignorant of Europe. They’re the ones championing American leadership and playing Russian roulette with Russia nonstop. They’re the fanatical extremists that are endangering the life of Europeans today. Their market solutions and military solutions have taken Europe into an irrational swamp. A swamp in which the “far-right” makes more sense than the “extreme-center”.

The far-left though remains the most rational. However in a swamp the sinking feeling clouds reason. Many Europeans do bemoan the immigrants while the banks pick their pockets. But many if not most do sense the theft taking place and have an appetite for a left-wing confrontation with the bosses.

We’re not just talking about the Syrian refugees in the headlines but those economic “refugees” away from of the headlines: the Filipinos, the Chinese, the Indians, the Brazilians, the Nigerians and the Moroccans. You can add every other nationality there is to this list. Because Europe today is as much a melting pot as America is. And despite what Europe’s white supremacists might think: there’s no getting rid of Europe’s new skin color.

As the new Europe emerges it will blend more and more with Africa and Asia. Quietly a cultural revolution is taking place. In Paris and London this has been obvious for some time. But now it's almost everywhere. Madrid, Berlin, Dublin, Malmo, Milan and a thousand other European cities echo what has already happened in the capitals of France and Britain.

20th Century Europe was a disaster made in Europe. If 21st Century Europe is not to be the same it must let humanity do its thing. Forget about a European Union or a United States of Europe. And let Europe unite with the world instead. It's happening whether Europe likes it or not. But the more Europe is conscious of it and positive about it the easier it will be to change the world for the better.

Europe is dissolving. It's adjusting to reality. And the reality is that it has always been just an extension of Asia and Africa. It's not an island. Or a unique unity. The workers of the world by migrating to Europe and doing their thing are proving this. The Europe being born is anything but Europe. And that’s something to celebrate.

ABOUT THE AUTHOR
Aidan O’Brien lives in Dublin, Ireland.

Light at the End of the Tunnel?

The best analysis of a modern Europe that I have read in a long time. The ‘new’ Europe if it wants to survive must detach itself from US policies and accept its new face.

Yes, an enlightening perspective. Embrace the change and move forward together. Whatever the differences, language etc., we are all people and we all need to look after our brothers and take care of everyone. Promote the Public good from which society and we all prosper. Screw the monarchial privileges that $$ banker control brings to the .01% privileged few.

You must be a great fan of Richard Nikolaus von Coudenhove-Kalergi, who wrote in his 1925 (!) book
Practical Idealism; “The man of the future will be of mixed race. Today’s races and classes will gradually disappear owing to the vanishing of space, time, and prejudice. The Eurasian-Negroid race of the future, similar in its appearance to the Ancient Egyptians, will replace the diversity of peoples with a diversity of individuals.“

You state that immigrants are going to solve Europe’s problems? Are you kidding me? They’re just going to turn it into Africa and the ME, and we all know what a success story those places are. The whole immigration thing was all planned long ago by our so-called “elites” (of which the above quoted gentleman was one, he laid the ground work for the present day EU) and started right after WW2, when the decolonization process began. Then a second wave came in the sixties and seventies (like the Turks in Germany), supposedly for economic reasons. These people were supposed to return to their countries of origin but socialist parties thought that they would vote them into power and granted them citizenship etc. Family reunification added 3-4 people for every migrant worker from these countries and the recent insanity by Merkel and co with her unrestrained immigration policies sort of completed the job.

Since most of these migrants are muslem Europe has a real problem as their beliefs are completely incompatible with European values, like democracy and equal rights for women and LBTQ people.
A recent example of this is a muslem party in Belgium that is taking part in the upcoming municipal elections that (among others) want to instate an islamic state in Belgium; https://voiceofeurope.com/2018/04/islam-party-in-belgium-wants-to-create-an-islamic-state-and-separate-men-and-women/

If you think that these are just a few isolated nut jobs, you’re dead wrong. Basically every muslem wants sharia law instated as this is what the Quran instructs them to do. Anyway, probably just wasting my time here, but by the time you lose your rights, you will know why…..