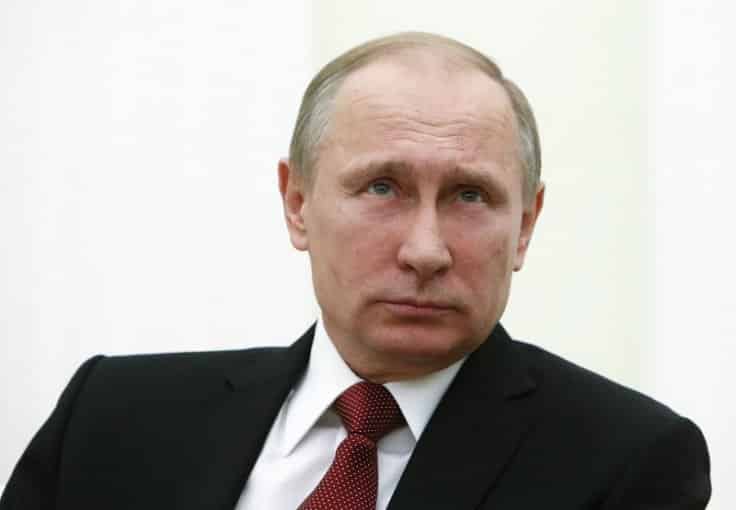 Here is Putin in extemporaneous discussion and interview (translated into English):

The second of those videos shows Putin offering Russia’s billionaires the choice between being dispossessed of their companies by the Government, or else signing an agreement with the Government, promising that they will henceforth place the welfare of their workers and of the people of Russia, above their own personal welfare and wealth, and only one billionaire there, Oleg Deripaska, hesitated, at which point Putin treated him contemptuously and Deripaska promptly signed.

Here is how Britain’s Express newspaper, on 7 October 2015, described that second  video:

It shows the 63-year-old [Putin], who has launched a blitz of more than 50 airstrikes against the terror regime [Syria’s ISIS] in recent days, directly confronting Russian oligarchs and ranting at them that they are good for nothing COCKROACHES.

In the incredible footage, Putin humiliates Oleg Deripaska, one of the world’s richest men with a fortune of $6m [Deripaska’s fortune in 2009 was actually $3.5 billion], and treats him like his personal lapdog.

It was filmed on a tour of Pikalevo, a struggling factory town where families had been venting their anger over job losses and unpaid wages.

Back when the Putin-Deripaska encounter happened, the right-wing British newspaper Telegraph had bannered, on 4 June 2009, “Vladimir Putin takes Oleg Deripaska to task”, and it placed their hostile slant on the event by sub-heading: “Vladimir Putin, the Russian prime minister, publicly criticised his most faithful oligarch on Thursday in an attempt to deflect growing social discontent on to the country’s unpopular super-rich.” (Of course, the U.S. regime would ignore why Russia’s super-rich were “unpopular,” much less the fact that America’s super-rich were involved in these heists from Russia that had caused so much of Russia’s post-Soviet depression.)

This policy was the fundamental change from the prior, Boris Yeltsin, years, when Harvard’s economics department and the World Bank, during the immediate post-Soviet 1990s, came into Russia and set up the system, working in conjunction with Yeltsin’s friends, to funnel the future profits from Russia’s vast undervalued natural resources, into partnerships between Yeltsin’s friends and U.S. billionaires and affiliated investors.

On 27 April 2018, Deripaska ceded control over the world’s second-largest aluminum-producer, Russal, and he did it because the United States regime had recently placed him and his corporations under new economic sanctions, which are allegedly focused against Russian billionaires who support Putin politically. If Deripaska wouldn’t cede control, then the sanctions-hit would be harder and more damaging to Russia’s economy, so Deripaska — in fulfillment of his agreement signed with Putin — ceded control.

In other words, Deripaska, whom Putin had actually forced to commit to placing Russia’s interests above their own, is now being treated by the U.S. regime as one of the chief people to ‘blame’ for Putin’s being in office, in Russia’s ‘dictatorship’.

This threat, by Putin, to Russia’s wealthiest (Deripaska having been one of the billionaires whom Putin didn’t dispossess when coming into power in 2000), wasn’t a staged PR event, but instead was simply the best-filmed instance of Putin’s standard policy, ever since becoming Russia’s leader: his policy that an aristocrat can lose everything if he places his interests above the nation’s interests.

This policy was the fundamental change from the prior, Boris Yeltsin, years, when Harvard’s economics department and the World Bank, during the immediate post-Soviet 1990s, came into Russia and set up the system, working in conjunction with Yeltsin’s friends, to funnel the future profits from Russia’s vast undervalued natural resources, into partnerships between Yeltsin’s friends and U.S. billionaires and affiliated investors. That American-led corruption sent the Russian economy into a tailspin, from which the new Russian President, Putin, rescued it, by laying down the law to the billionaires: that their interests were subordinate to, not dominant above, the nation’s interests. This is the principal difference between the ideology of today’s America, and of today’s Russia.

My 3 June 2014 article, “How and Why the U.S. Has Re-Started the Cold War (The Backstory that Precipitated Ukraine’s Civil War)”, showed, by means of graphs, that the economic depression which engulfed Russia (and which was totally ignored by the Western press) during 1990-2000, ended and reversed immediately following (when Putin came into power), and especially ever since around 2004, so that Russia’s economic growth-rate under Putin, at least the rate prior to America’s economic sanctions against Russia in 2014, was one of the world’s best and looked likely to pose serious competition to the U.S. aristocracy in the future. From the pits that were brought by the U.S. regime in Russia — including the massive heists from the Russian public — to the period of Putin’s rule in Russia, has been a sea-change, and the U.S. regime cannot tolerate it; they want the U.S. elite’s looting of Russia to return.

This is necessarily a simplified overview of the conflict between the U.S. regime and Russia, but it’s nonetheless true. In order to understand it more deeply, filling in the details during the period after the end of the Soviet Union — and of its communism, and of its Warsaw Pact military alliance mirror-image to America’s NATO alliance, till now — cannot meaningfully be done outside the context of the U.S. regime’s swindle of Russia ever since the night of 24 February 1990, when U.S. President George H.W. Bush told America’s allies that it was a lie to Soviet President Mikhail Gorbachev when Bush’s people had promised Gorbachev that if the Soviet Union and its Warsaw Pact ended, then NATO would not expand, not move “one inch to the east” toward Russia’s border — which the U.S. and those allies have since done all the way up to Russia’s border. (In reverse, it’s as if Russia now were placing its soldiers and its missiles on or near the Mexican border, and the Canadian border.) This swindle of Russia meant that though the Cold War did end on Russia’s side, it never yet has ended on America’s. The greed of the U.S. regime — and of its allies — seems to be endless, including, ultimately, grabbing Russia itself. Putin resists, and so they hate him. That’s the reality.

To the U.S. regime and its propagandists, Putin is “The Pariah” and “The West’s Public Enemy Number One”, but to the Russian people, he is the protector of their nation against the U.S. regime’s threats to Russia’s national sovereignty. More diametrically opposite views of the same man, could hardly even be imagined.

The Rise and Fall of the United Sheepdom (Tales From My Uncle’s Animal Farm).