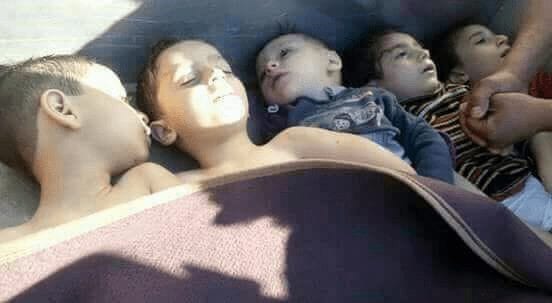 Children in rebel-held Idlib supposedly killed by a Syrian government CW gas attack. It could be real or it could be manufactured, in either case it is a false flag by the West to smear and then attack Pres. Assad's forces. This cynical script has been used many times before. It always works due to the massive ignorance of the American public and the prostitution of the mainstream media.

On Monday, Syria’s military and Russian reconciliation center members in the country found heavy weapons supplied by US-dominated NATO to ISIS and other terrorists, along with gas masks, and other protective gear for use during a CW attack.  According to retired Lebanese General Amin Hteit, the cache suggests preparation for another false flag CW incident to be wrongfully blamed on Syrian forces like earlier ones - used as pretexts for US-led aggression on Syrian military targets.

Days earlier, Syrian forces found large amounts of NATO and Israeli weapons supplied to ISIS and other terrorists. Media scoundrels aware of what’s going on suppressed the news - complicit with US-led naked aggression on Syria by their silence, along with blaming government forces for high crimes committed by US-supported terrorists.

Washington and its imperial partners rejected the idea, repeatedly making baseless accusations against Syrian forces for CW incidents conducted by terrorists they support - including false flags in Khan Sheikhoun last year and Douma last month. According to Russia’s UN mission, US-led “Western countries give (terrorists they support) a sense of impunity…encouraging them to use chemical weapons.”

Terrorists’ workshops were discovered for making these weapons. As previously explained, Pentagon contractors instruct terrorists on making these weapons in Jordan. Russia wants an impartial investigative body created for dealing with chemical terrorism. Washington and its imperial partners want their proxy terrorist fighters continuing to wage CW war. It’s just a matter of time before the next incident - followed by more US-led aggression on Syrian targets.

CW terrorism is one example of how the scourge of imperialism works, Washington the world’s leading exponent of its ruthlessness.

The "Syrian gas attack" card is one that keeps on giving, and the criminals in the Western alliance are not about to stop using it.

BELOW: The Russians and the Syrians have often given plenty of advance notice that another false flag was coming from the West, as it is the empire's favorite weapon. Based on hypocrisy, it must rely on deceit to shield the truth of its brutal aggressions.

its been alleged that the Assad "regime" in Syria has used chemical gas weapons to slaughter their own civilians, again. Now, many of you out there watching this already know that this was a false flag without even looking into it. the fact of the matter is the United states has been busted on 3 separate occasions supplying U.S backed rebel forces with chemical agents in the past to commit atrocities, they did so knowing what would happen and they planned to use these terrorist attacks as a pretext for further bombing attacks over Syria and prolonging the Zionist inspired war on terror.

The Russian General Staff informed the world today about monstrous things from the Syrian conflict scene. In East Ghuta, rebel jihadist fighters were preparing the staging of another alleged use of chemical weapons, which would then be blamed on the Syrian government and serve as a cause for a USA “reprisal” strike against Damascus. According to the Russian chief of staff, there is a whole “casting” of women, children and old people on the ground to portray “victims” of a chemical weapons attack. Even activists of the controversial “white helmets” (in which, for example, the Berlin Christmas market assassin Anis Amri was active) and camera crews are already present.
ABOUT THE AUTHOR

A Dive Into Washington’s Swamp

The Simulation of Democracy