Home BRITISH/ EU/ NATO COMPLICITY Uh… What Did Pompeo Mean When He Vowed To “Push Back” Against Corbyn?

Uh… What Did Pompeo Mean When He Vowed To “Push Back” Against Corbyn? 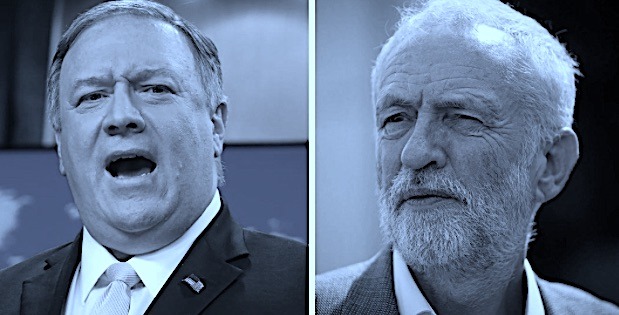 So now Pompous Ass is thteatening Corbyn. The outrageous thing is not Pompeo doing his bully act, that's what he is. It is the cowardice and lack of dignity of the UK government and political class.

An audio recording from a private meeting that was leaked to The Washington Post reportedly features US Secretary of State Mike Pompeo vowing to “push back” against surging British Labour leader Jeremy Corbyn, and many are concerned that what he said sounds an awful lot like a top US official promising to interfere in the UK’s democratic process.

At a closed-door meeting with Jewish leaders earlier this month, one of the attendees asked Pompeo if Corbyn becomes Prime Minister, “would you be willing to work with us to take on actions if life becomes very difficult for Jews in the UK?”

Before I get to Pompeo’s response, I should interrupt myself to note that nobody actually believes that Corbyn would make life difficult for Jews in the UK. Anyone who claims to believe this is lying. Usually when you hear people regurgitating bullshit establishment lines they’re people who are acting basically in good faith, who are only spouting bullshit because they have been propagandized. Not so in this case. The idea that a man with a lifelong history of opposing bigotry is a secret antisemite who will facilitate the persecution of Jews if given the opportunity is a completely baseless smear campaign, and everyone knows it, including those who advance it.

The notion that Jeremy Corbyn advances antisemitism is literally just some gibberish the smear merchants made up to prevent the rise of a politician who threatens to upset existing power structures. It’s exactly as believable and exactly as legitimate as if British newspapers were constantly running headlines claiming that Corbyn is actually three children standing on each other’s shoulders inside grown-up’s clothes; the one and only difference is that they were able to make the antisemitism smear stick. Anyone who pretends to believe that Corbyn is a closet antisemite is exactly as honest and credible as someone who solemnly tells you, “I am very concerned about the fact that the Labour Party is led by a man who is secretly a cartoon mascot for a children’s breakfast cereal.”

So anyway, Pompeo is asked by some ridiculous twat what he’s going to do in the event of a Corbyn-led Kristallnacht, and WaPo reports on his response as follows:

Pompeo said, “It could be that Mr. Corbyn manages to run the gauntlet and get elected. It’s possible. You should know, we won’t wait for him to do those things to begin to push back. We will do our level best,” he said to fervent applause from attendees.

“It’s too risky and too important and too hard once it’s already happened,” he said.

This revelation, understandably, has kicked up a fair bit of chatter in merry old England.

“President Trump and his officials’ attempts to decide who will be Britain’s next prime minister are an entirely unacceptable interference in the UK’s democracy,” The Guardianquotes a Labour spokesperson as saying in response to the revelation.

“STOP: The Secretary of State Mike Pompeo just promised ‘Jewish leaders’ in the United States that he would stop Jeremy Corbyn coming to power here,” tweeted former British MP George Galloway. “Is this normal now? Is this what we’ve been led to? Is this good for Jews? For Britain? Really?”

“They did it in Latin America, Africa and Asia. Now the US government wants to overthrow democracy in Britain,” tweeted The Guardian‘s George Monbiot. “Still waiting for a UK government spokesperson to express their outrage. Hello???”

“Hmm. Hard to spin this any other way: the US secretary of state secretly promises US Jewish leaders to prevent Corbyn from becoming UK prime minister,” tweeted British journalist Jonathan Cook. “Hard too not to suspect that the US is *already* helping to ensure Corbyn doesn’t become PM. Because the obvious implication of Pompeo’s comment is that the US knows it can damage Corbyn without leaving fingerprints at the crime scene – presumably through black ops, image management etc. The elephant in the room: Why assume the US isn’t already using those techniques?”

It is no secret that the DC establishment considers other nations to be its personal property and has no qualms about openly working to topple the governments of nations like Venezuela and Iran, but people aren’t accustomed to hearing this sort of language directed at white, English-speaking liberal democracies. Add in the fact that this is coming from a particularly reviled administration in terms of international optics and the likely public revulsion increases. The thought that this administration may decide the direction of UK politics would be all kinds of infuriating to the average pom.

So many questions need to be answered. Was Pompeo in fact saying that the US is intending to prevent Corbyn from becoming Prime Minister? And if so, how? What exactly does “push back” entail? Are we talking psyops and smear campaigns? Or something more? And whatever they intend to do, have they started doing it already?

These are all questions that we should be intensely curious about. If Corbyn is able to continue to rise, we may begin seeing some increasingly overt manipulations from many places we’re not meant to be seeing them as an ailing empire fights to hold itself together in the face of increasing public discontent. The more overt the guardians of the empire are forced to be, the more they expose themselves, and the greater that public discontent may become. Our rulers are in a very complex balancing act right now, and we’d all do well to pay attention.

The best way to get around the internet censors and make sure you see the stuff I publish is to subscribe to the mailing list for my website, which will get you an email notification for everything I publish. My work is entirely reader-supported, so if you enjoyed this piece please consider sharing it around, liking me onFacebook, following my antics on Twitter, throwing some money into my hat on Patreon or Paypal, purchasing some of my sweet merchandise, buying my new book Rogue Nation: Psychonautical Adventures With Caitlin Johnstone, or my previous book Woke: A Field Guide for Utopia Preppers. For more info on who I am, where I stand, and what I’m trying to do with this platform, click here. Everyone, racist platforms excluded, has my permissionto republish or use any part of this work (or anything else I’ve written) in any way they like free of charge.