Insulated From the Truth (Annotated) 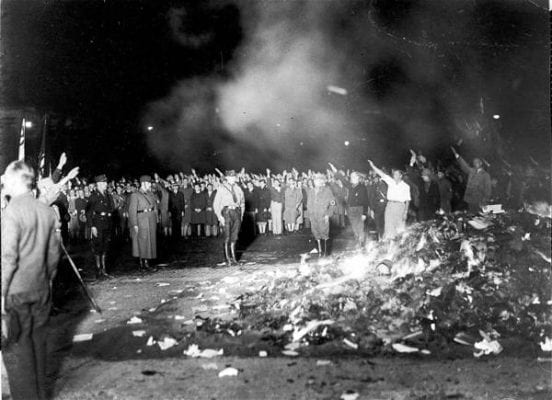 Bookburning: One of many Nazi trademarks. But in the US neoliberal version, dissident books are simply rendered invisible as the mainstream media ignores them. That said, eventually we may get to this, as that is clearly the drift in America.

In 1933, soon after Hitler's ascent to power, the British ambassador to Germany made this assertion: " I have the impression that the persons directing the policy of the Hitler government are not normal. Many of us, indeed, have a feeling that we are living in a country where fanatics, hooligans and eccentrics have got the upper hand."  Well, fast forward to Amerika 2019 and what have we got? Well, not only does this president fit the bill, but what of those who work under him, sometimes overtly and sometimes covertly, and the millions who trash any dissent towards him?

This is the 2nd anniversary of the infamous Charlottesville  white supremacy march and melee. What struck me then and of course now is the utter apathy so many of my fellow citizens had and still have over what  transpired on August 11-12 2017. Those white supremacy fanatics, are they not in these early stages similar to the Nazi mobs who first marched,  and then destroyed Jewish business, burnt down synagogues, and of course beat up or killed Jewish citizens of Germany?  Do not many of them desire to harken back to those ' Good old days '? After all, they carried those similar torches and repeated those similar mantras of ' Blood and Soil ' and ' Jews will not replace us'. The real spin & sin of it all is when Mr. Trump decided to mention , after the Charlottesville street attacks between white supremacists and Antifa, that "Both sides had bad people and some nice people too. " So what he was doing was to give a backhanded legitimacy to the Neo Nazis who marched with such vitriol. The outrage should still be echoing throughout this nation... especially but not restricted to Jewish people. Where was the outrage coming from the Israeli government and mainstream media? Where was Jared Kushner and his wife? Where were all those Jews who either worked for this administration or support it?

Sadly, anyone who still resides under the Trump/ Republican tent, ignoring the Charlottesville truth , and of course now the El Paso shooter truth is walking down a dangerous road. The white supremacist march , to this writer, most likely gave manna to  Robert Bowers in Pittsburgh, before he decided to go into that synagogue and kill Jews. Trump's references to those coming to our southern border as rapists, drug dealers and of course ' invaders ' may have just influenced that 21 year old to drive all the way from Dallas to do his deed against hispanics in El Paso. You don't have to be a rocket scientist once you have seen that young man's writings and postings etc. Of course, the right wing media is trying to use the Dayton, Ohio shooter as a foil to this argument. Why? Because he called himself a socialist (sic) and admired Sen. Warren? [That little snippet may be a planted lie]. The analogy is ludicrous as she never used any such similar rhetoric of casting right wingers as ' invaders' (nor has she ever come close to defining herself as a "socialist"), coming to take away our sacrosanct way of life.  Both shooters were obviously mentally unbalanced, for them to do such terrible deeds. Yet, that is even more reason for our so called leaders to tone down such rhetoric, because it stirs up emotions for violence, even in normal people, let alone those on the flammable edge. Check out Mr. Trump's talks and speeches since 2015 and see for yourselves.

All this leads to another outgrowth of this Neo Fascist plague, demonstrably stoked by the neoliberal establishment, that has gripped our nation. One of the two most favorite websites that I write for regularly has been under a total attack by trolls... very  technically  savvy ones. The site has been attacked two or three times before, costing the site masters lots of money to counteract the damage done. Recently, myself and seven other writers, some who are much more popularly known than me, cannot even get our submissions to the site via email. Nor can the site contact us back. I have to ask friends to submit my work via their emails. Sad. Why is this being done? Well, the site is famous for its stance against Imperialism and Steroid Capitalism. It has also been very keen to criticize both of our two major political parties. Of course, considering the insane and confusing political atmosphere today in America, it's very likely the attackers, hackers and harassers could be just about anyone: rom the "left", from the right, and, just as probable, state entities or individuals or groups supported with public monies. We know for a fact that the Democrats, the supposed "Lesser Evil" in the evil duopoly, now comfortably in bed with the CIA and its ilk, and mute on matters of imperialist war, has spearheaded witch-hunting against antiwar dissident sites or those who refused to buy their Russiagate hoax under the guise of protecting the public from "fake news"!  They are also on record supporting bills and amendments to "National Security" laws (i.e., The Patriot Act" and Homeland Security, filled with vague statutes) effectively curtailing First Amendment guarantees to free speech, as well as other basic personal freedoms guaranateed by the Constitution.  Obama, among his many betrayals, pioneered a law that any dictator would welcome. On Dec 31 2011, an ACLU press release warned us that,

WASHINGTON – President Obama signed the National Defense Authorization Act (NDAA) into law today. The statute contains a sweeping worldwide indefinite detention provision.  While President Obama issued a signing statement saying he had “serious reservations” about the provisions, the statement only applies to how his administration would use the authorities granted by the NDAA, and would not affect how the law is interpreted by subsequent administrations.  The White House had threatened to veto an earlier version of the NDAA, but reversed course shortly before Congress voted on the final bill.

“President Obama's action today is a blight on his legacy because he will forever be known as the president who signed indefinite detention without charge or trial into law,” said Anthony D. Romero, ACLU executive director. “The statute is particularly dangerous because it has no temporal or geographic limitations, and can be used by this and future presidents to militarily detain people captured far from any battlefield.  The ACLU will fight worldwide detention authority wherever we can, be it in court, in Congress, or internationally.”

Under the Bush administration, similar claims of worldwide detention authority were used to hold even a U.S. citizen detained on U.S. soil in military custody, and many in Congress now assert that the NDAA should be used in the same way again. The ACLU believes that any military detention of American citizens or others within the United States is unconstitutional and illegal, including under the NDAA. (Read more, President Obama Signs Indefinte Detention Bill into Law).

As a baby boomer, I have never seen such overt rage directed toward anyone who stands up to this Neo Nazi / Neoliberal fanaticism disguised as patriotic conservatism. Alas, many true conservatives and libertarians stand with us on the left who disdain attempts to shut out our free speech. The threats and use of brute force is what made a wonderful and advanced society like Weimar Germany fall from grace. Does that rabbit hole await us here?