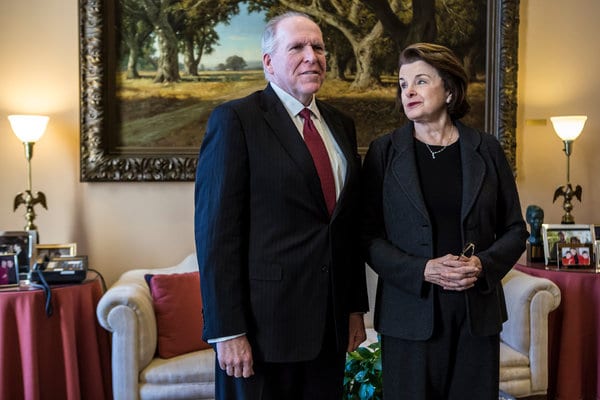 Deep state loyalist Dianne Feinstein (D-CA) with John Brennan, widely credited with manufacturing the Russiagate psyop. The CIA and other  intel agencies violated Feinstein's own privacy and that of her committee, with hardly a peep from her.

Since Donald Trump was elected president the New York Times' understanding of the 'Deep State' evolved from a total denial of its existence towards a full endorsement of its anti-democratic operations.

A wave of leaks from government officials has hobbled the Trump administration, leading some to draw comparisons to countries like Egypt, Turkey and Pakistan, where shadowy networks within government bureaucracies, often referred to as “deep states,” undermine and coerce elected governments.

So is the United States seeing the rise of its own deep state?

Not quite, experts say, but the echoes are real — and disturbing.

March 6, 2017 - Rumblings of a ‘Deep State’ Undermining Trump? It Was Once a Foreign Concept

The concept of a “deep state” — a shadowy network of agency or military officials who secretly conspire to influence government policy — is more often used to describe countries like Egypt, Turkey and Pakistan, where authoritarian elements band together to undercut democratically elected leaders. But inside the West Wing, Mr. Trump and his inner circle, particularly his chief strategist, Stephen K. Bannon, see the influence of such forces at work within the United States, essentially arguing that their own government is being undermined from within.

It is an extraordinary contention for a sitting president to make.

American institutions do not resemble the powerful deep states of countries like Egypt or Pakistan, experts say. Nor do individual leaks, a number of which have come from President Trump’s own team, amount to a conspiracy.

The diagnosis of a “deep state,” those experts say, has the problem backward.
...
Though Mr. Trump has not publicly used the phrase, allies and sympathetic news media outlets have repurposed “deep state” from its formal meaning — a network of civilian and military officials who control or undermine democratically elected governments — to a pejorative meant to accuse civil servants of illegitimacy and political animus.

September 5, 2018 - I Am Part of the Resistance Inside the Trump Administration

On Russia, for instance, the president was reluctant to expel so many of Mr. Putin’s spies as punishment for the poisoning of a former Russian spy in Britain. He complained for weeks about senior staff members letting him get boxed into further confrontation with Russia, and he expressed frustration that the United States continued to impose sanctions on the country for its malign behavior. But his national security team knew better — such actions had to be taken, to hold Moscow accountable.

President Trump has long tried to explain away his legal troubles as the work of a “deep state” of Obama supporters entrenched in the law-enforcement and national-security bureaucracies who are just out to get him. Now junior officials and others accused of wrongdoing are making the case that the same purported forces are illegitimately targeting them, too.

President Trump and some of his allies have asserted without evidence that a cabal of American officials — the so-called deep state — embarked on a broad operation to thwart Mr. Trump’s campaign. The conspiracy theory remains unsubstantiated, ...

President Trump is right: The deep state is alive and well. But it is not the sinister, antidemocratic cabal of his fever dreams. It is, rather, a collection of patriotic public servants — career diplomats, scientists, intelligence officers and others — who, from within the bowels of this corrupt and corrupting administration, have somehow remembered that their duty is to protect the interests, not of a particular leader, but of the American people.

[O]ver the last three weeks, the deep state has emerged from the shadows in the form of real live government officials, past and present, who have defied a White House attempt to block cooperation with House impeachment investigators and provided evidence that largely backs up the still-anonymous whistle-blower.

The president and his allies have responded with fury. Those damning testimonials are part of a political vendetta by “Never Trumper” bureaucrats, members of a “deep state” bent on undermining the will of the people, they assert.

But what is this “deep state”? Far from being a tool of political corruption, the Civil Service was created to be an antidote to the very kind of corruption and self-dealing that seems to plague this administration.

This development is disconcerting. If the deep state is allowed to make its own policies against the will of the elected officials why should we bother with holding elections?

The Democrats are stupid to applaud this and to even further these schemes. They are likely to regain the presidency in 2024. What will they do when all the Civil Service functionaries Trump will have installed by then will organize to ruin their policies?

About the Author
"b" is Moon of Alabama's founding (and chief) editor.  This site's purpose is to discuss politics, economics, philosophy and blogger Billmon's Whiskey Bar writings. Some time ago, the commenting at Billmon's Whiskey Bar became a bit excessive. Billmon therefore closed the comments at his place on June 29, 2004. The community of commentators was left behind to search for a new place. Moon Of Alabama was opened as an independent, open forum for members of the Whiskey Bar community.  Bernhard started and still runs the site. Once a while you will also find posts and art from regular commentators. The name of the original Whiskey Bar was taken from Bertolt Brecht's Alabama Song where the first line goes: "Show me the way to the next whiskey bar". The name Moon of Alabama was taken from the first line of the chorus of that song:
"Oh, moon of Alabama ...".

You can reach the current administrator of this site by emailing Bernhard at MoonofA@aol.com.

Brainwashed Liberals Luv The CIA Most!