October 29, 2019
Please make sure these dispatches reach as many readers as possible. Share with kin, friends and workmates and ask them to do likewise.

Editor’s Note: In this brief on the malevolent use of exiles, their weaponisation  by the US power elites, Yasha Levine focuses on a rather ignored aspect of US politics and propaganda, long employed by the empire to serve its narratives and objectives. The diaspora of reactionaries has many streams in the American brew: reactionaries from Eastern Europe, as old as “White Russians” yearning for a return of the tsar; German fascists imported in the wake of WW2 to bolster America’s global effort against the Soviets; Cuban gusanos, always given preferential treatment by the Deep State, clever people this, these hardcore reactionaries who have used and been used by the Deep State; the defeated collaborators fleeing Vietnam and possibly somejust retribution; and more recently the Venezuelan rich, plus other elites who naturally feel safe on American soil. All of these people constitute an extra layer of ultra conservative anti-communism in the US, as if we needed imports of this sort, such posture reinforced by a rabid know-nothing pro-Americanism given their alliances, mutual class outlooks, and other historical ties. As Yasha indicates, they are always on tap, ready to serve the empire in its criminal stunts, no matter how filthy these may be from a moral standpoint.

A notable example of what Levine is talking about, the easy and often voluntary weaponisation of reactionary exiles, happened almost 20 years ago, when Elian Gonzalez, a 5-year-old Cuban child, was found floating on an inner tube off the Florida coast in November 1999. As reported by TeleSUR:

His mother and other Cubans accompanying the boy died on route from the island 90 miles to the south, Elian’s father had not been told of the voyage. The right-wing Cuban community in Miami took advantage of his case to try to further their counter-revolutionary agenda, as his great-uncle’s family tried to keep him in the United States. The tug of war quickly became a cause celebre, discussed around the globe. 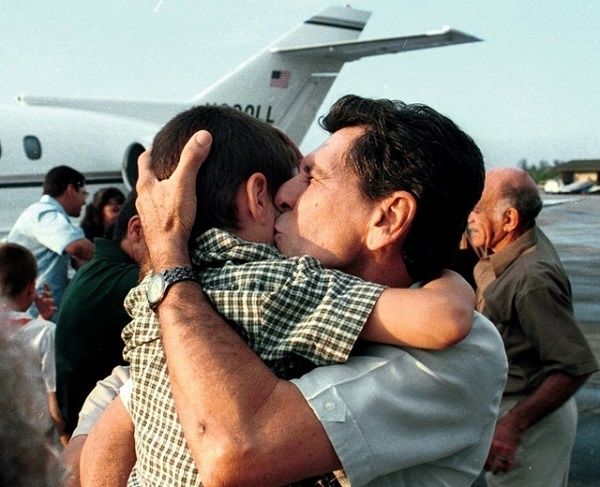 Elian Gonzalez is held by his paternal grandfather Juan Gonzalez upon his arrival at Jose Marti airport June 28, 2000, in Havana. More than just a return, it was a triumphant rescue from the claws of exile reactionism using the child to score propaganda points.

However, the whole scheme backfired when U.S. and international opinion instead insisted Elian be returned to his father in Cuba. An international campaign launched by Fidel and the Cuban people eventually led to U.S. immigration agents having to seize the boy at gunpoint from the Miami home where he was being held hostage.

He was returned to Cuba to a big welcome on June 28, 2000. It was a major blow to the counter-revolutionaries in Miami as well as to the U.S. aggressive policy toward Cuba.”

When we think “immigrants in America” we rarely consider those who are privileged and weaponized in service of American Empire.

When we think “immigrants in America” we rarely consider those who are privileged and weaponized in service of American Empire. The attack on Max Blumenthal by Venezuela’s ex-ruling elite diaspora — which has been key to pushing regime change in Venezuela — is such a clear example of that: the use of a rightwing emigre as a legal/physical weapon against a journalist. It’s a weapon designed to intimidate and silence him and his colleagues at The Grayzone — especially Anya Parampil, who has been doing amazing work on this issue.

I was arrested on Friday on a COMPLETELY FALSE charge manufactured by the Venezuelan opposition related to their siege of the embassy in DC. I spent 2 days in jail, was shackled for extended periods & was denied my right to call a lawyer. Here’s the facts:

‘This charge is 100% false’: Grayzone editor Max Blumenthal arrested months after reporting on Venezuelan opposition violenceThe Grayzone editor Max Blumenthal has been arrested on false charges after reporting on Venezuelan opposition violence outside the DC embassy. He describes the manufactured case as part of a wider campaign of political persecution. Bythegrayzone.com

As the Lawyer’s Guild pointed out, Max Blumenthal’s “arrest took place hours after The Grayzone issued a report on USAID funding to lobbyists for the Venezuelan opposition.”

I’ll be writing more on this. In the meantime, here’s a rundown of what happened:

Max Blumenthal, the editor of the news site The Grayzone, was arrested on the morning of October 25 on a fabricated charge related to the siege of the Venezuelan embassy in Washington, DC that took place between April and May.

A team of DC police officers appeared at Blumenthal’s door at just after 9 AM, demanding entry and threatening to break his door down. A number of officers had taken positions on the side of his home as though they were prepared for a SWAT-style raid.

Blumenthal was hauled into a police van and ultimately taken to DC central jail, where he was held for two days in various cells and cages. He was shackled by his hands and ankles for over five hours in one such cage along with other inmates. His request for a phone call was denied by DC police and corrections officers, effectively denying him access to the outside world.

Blumenthal was informed that he was accused of simple assault by a Venezuelan opposition member. He declared the charge completely baseless.

Court documents indicate the false charge of simple assault stems from Blumenthal’s participation in a delivery of food and sanitary supplies to peace activists and journalists inside the Venezuelan embassy on May 8, 2019.

The charge was manufactured by a Venezuelan opposition member who was among those laying siege to the embassy in a sustained bid to starve out the activists inside.

“I was not party to any violent actions around the Venezuelan embassy,” Blumenthal reiterated. “This ginned up claim of simple assault is simply false.”

Yasha Levine is an editor of The eXiled and a co-founder of the SHAME Project. He used to edit The eXile in Moscow before the paper was shut down by the Russian government. His work has appeared in Wired, The Nation, Playboy, Penthouse and others. He is currently convalescing on the beaches of Venice, California. Read his book: The Corruption of Malcolm Gladwell.

The Plundering of Ukraine by Corrupt American Democrats