Home ABOMINATIONS The Fall Of The Neoliberal Order Is Drastically Accelerating

The Fall Of The Neoliberal Order Is Drastically Accelerating

November 1, 2019
Please make sure these dispatches reach as many readers as possible. Share with kin, friends and workmates and ask them to do likewise. 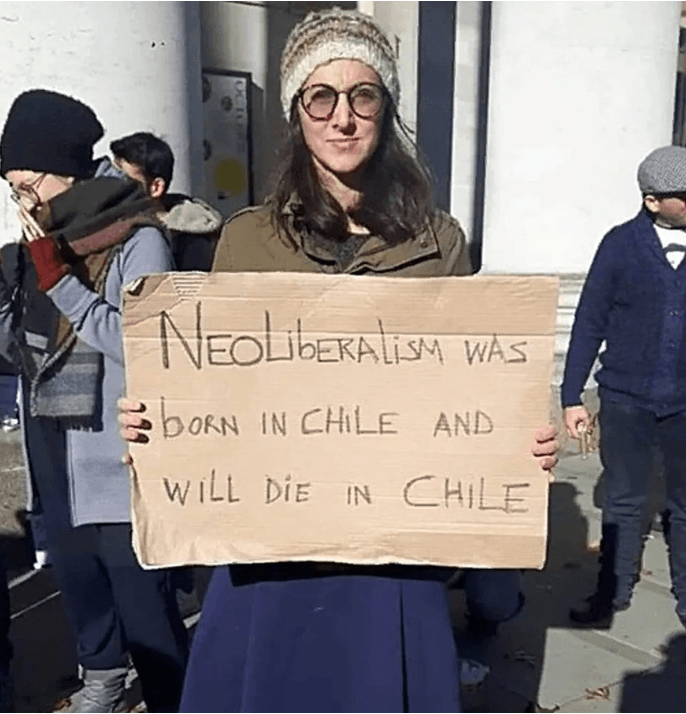 [dropcap]F[/dropcap]or the last half century, the capitalist world has existed in a turbo-charged, exaggerated form that leads it towards boom and bust in even more extreme ways than it was in the past. This uniquely unsustainable stage of capitalism, called neoliberalism, has vindicated the following assessment in Joseph Stalin’s The Foundations of Leninism: “Lenin called imperialism ‘moribund capitalism.’ Why? Because imperialism carries the contradictions of capitalism to their last bounds, to the extreme limit, beyond which revolution begins.”
With the anti-colonial and anti-capitalist protests in Chile, Ecuador, Haiti, and other parts of the Third World, just such a revolution is now happening. Technically, the revolution that imperialism provoked began long ago; during what can be considered the first wave of anti-capitalist revolutions, which spanned from the French revolution of 1789 to the Paris Commune of 1871, major reactions began to happen in response to the contradictions of capitalism. The second wave, which spanned from the Russian revolution of 1917 to the Sandinista revolution of 1979, numerous countries and regions were successfully turned socialist or decolonized.
The third wave of revolution is going to be defined by the global worker-peasant response to the catastrophe of neoliberalism, which has driven hundreds of millions of people into poverty as worldwide inequality has skyrocketed in the last several decades. And in appropriate parallel with the fact that the Haitian uprising of 1791 was the first successful anti-colonialist revolution, this coming new series of revolutions is arguably beginning in Haiti. The West has weaponized neoliberalism to effectively recolonize Haiti, with Haitians suffering under brutal austerity policies. So now Hatians are in the streets to shut down their unjust society and force through a new government.
These events are part of a worldwide unraveling of the neoliberal order, one that’s going to leave the world dramatically reshaped. Neoliberalism is unsustainable by nature, and it’s inevitably going to continue on a path of collapse that started with the Great Recession. It’s facilitated such obscene inequality, created such instability within financial markets, done so much to exacerbate the collapse of the U.S. empire, and done so much damage to the climate that there’s no possible way it can return the world to the stability of the 20th century.

These communist teachings help us make sense of a world that seems increasingly bleak and chaotic. The 21st century’s catastrophes are symptoms of a process of collapse that objective thinkers have long foreseen would happen under capitalism. Once you understand the Marxist analysis of neoliberalism and its unraveling, you can also understand the Marxist solutions to the crisis of neoliberalism.
Neoliberalism has been a mad dash by the global elite for maximum profits, one that’s perfectly fulfilled all the classic warnings about capitalism: Karl Marx’ prediction that capitalism will eventually consume itself, Karl Kautsky‘s prediction about the future being either socialism or barbarism, and Lenin’s prediction about the extreme contradictions of imperialist capitalism leading to revolution.
Marxism is the idea that society needs to transition away from capitalism and towards a new classless, stateless system, which is called communism. The practical way to make this transition, as articulated by Marxism-Leninism, is for communists to seize control of the governments they live under so that they can make the proletariat rather than the bourgeoisie into the shapers of policy. This middle step, the one where the proletariat takes control of the state apparatus as a defense against attacks from the world’s remaining capitalists, is one that’s already been reached in China, Cuba, Vietnam, Laos, the DPRK, and perhaps next Venezuela or Bolivia.
How do we get the capitalist countries to the same point as these nations? By getting people involved in communist organizing through educating them about the class dynamics of our neoliberal crises. In The Foundations of Leninism, Stalin went on to write that there are three main contradictions in the functioning of imperialist capitalism, ones that we communists should mention as we try to get the victims of neoliberalism on our side.
He described the first of these contradictions as the one between what he called labor and capital-by which he meant the discrepancy between the work that proletarians can put into improving their living conditions, and the reality that imperialist capitalism will always keep them under the domination of society’s ruling institutions.
In what today would be a perfect assessment of society under neoliberalism, he wrote that “Imperialism is the omnipotence of the monopolist trusts and syndicates, of the banks and the financial oligarchy, in the industrial countries.” People can work hard, but most of them will never make it out of the underclass, and trying to make things better by voting in bourgeois elections will never bring fundamental change. Therefore, the only option of the proletariat is to overthrow the system. Under neoliberalism, this contradiction gets ever more glaring as income inequality gets more and more extreme.
The second contradiction is the one of “the various financial groups and imperialist Powers in their struggle for sources of raw materials, for foreign territory.” Stalin observed that amid imperialism, different corporations and capitalist nations inevitably enter into conflict over who gets to exploit what. One can see parallels to today in the rivalry between Russia’s capitalist oligarchs and the Western capitalists, and in the competition between Chinese companies and American ones.
Amid neoliberalism and the decline of the U.S. empire, this dynamic of capitalist competition is leading to resurgent socialism in both the Western nations and in Russia. And the Chinese Communist Party, with its strategic incorporation of capitalist markets, has taken advantage of this dynamic to strengthen China’s economy and ultimately further the cause of Chinese socialism. The West, of course, is being further weakened by this process of China’s economic rise.
The third contradiction is the one that appears when the imperialist nations subjugate and exploit the countries that have been colonized. So many empires have fallen because the people of the conquered countries have rebelled, and the American empire is once again showing this. The increasingly successful Palestinian rebellion against America’s crucial foreign policy ally Israel, the loss of Cuba, Venezuela, and Bolivia to the forces of socialist anti-colonialism, and the rebellions against the neo-colonialist regimes in Iraq, Chile, Haiti, Ecuador, and elsewhere are weakening the U.S. empire.
The catalyst for Venezuela and Bolivia’s embrace of socialism, as well as the cause of the current protests throughout U.S.-aligned Third World nations, has been the rise of neoliberalism in these countries. The proletarians throughout these places have been prompted by the extreme contradictions of imperialism to carry out revolution.
The unraveling of neoliberalism shows just how unstable capitalism is. Capitalism hasn’t been in existence for half as long as the Roman empire did, and throughout most of capitalism’s history there’s been a steady pattern of uprisings from the people it’s colonized and subjugated. The U.S. empire, which is capitalism’s greatest epicenter for exerting imperial control, hasn’t been able to last a little over a hundred years as a global empire before beginning to fall into disarray. And neoliberalism, despite the image of utopian invincibility that its adherents have cultivated around it, hasn’t lasted half a century before provoking a third wave of revolutions.

About the author(s)
Rainer Shea is an independent Marxian anti-imperialist writer. He maintains a personal blog at https://rainershea.com/.

How long can NATO go on?