Home ABOMINATIONS US Intervention Is Never, Ever, EVER The Solution

US Intervention Is Never, Ever, EVER The Solution 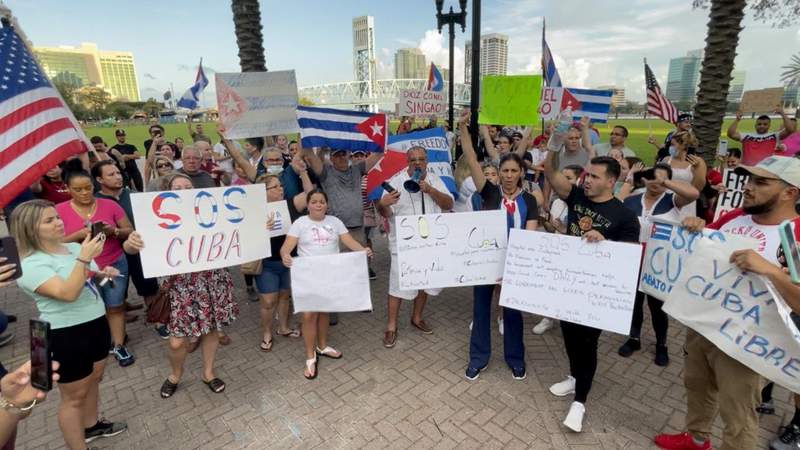 The blatant lack of impartiality exhibited by the corporate media and other biases confirm their mission as a cynical propaganda conduit for the global oligarchy headquartered in Washington.

Going Rogue With Caitlin Johnstone · US Intervention Is Never, Ever, EVER The Solution

There is nothing surprising about this; the imperial media always ignore protests in member states while amplifying them in unabsorbed territories. But what is a bit surprising is how many calls we are seeing for US military intervention in Cuba despite the US military’s consistent and unbroken track record of always making things worse.

The mayor of Miami went on Fox News to encourage the Biden administration to consider airstrikes and other military options. Right-wing pundit Kurt Schlichter is calling for an invasion to topple Havana and former congressman Carlos Curbelo is saying that Biden should “keep all options on the table” for acts of war. Participants in US rallies against the Cuban government frequently voice support for military intervention.

Which is of course bananas. It appears unlikely that any overt US military action is on its way at this stage in the game; most Americans don’t even support the economic blockadeon Cuba much less airstrikes or an invasion, so we’re not anywhere near that level of consent-manufacturing at this time. But it’s just amazing that this is an idea that’s getting any traction at all.

People who believe US military intervention solves problems are as dumb as flat-earthers but infinitely more destructive. It is always disastrous and it never achieves what its proponents claim it will achieve.

Whenever I say this I always get one or two geniuses stepping in to say “Aha, I believe you are forgetting a little thing known as World War Two?”

To such Einsteins I always say yes, your mind burns with the brightness of a thousand galaxies, but first of all that wasn’t interventionism since the US was attacked and Germany declared war on it immediately thereafter. More importantly, though, it’s very telling that people have to reach all the way back through history to an age where the world was almost unrecognizably different from the world of today to even try and find an example of the US military being used in a way that was not evil and disastrous.

After Korea, Vietnam, Afghanistan, Iraq, Libya, etc, the facts are in and the case is closed. The interventionists have lost the argument. US interventionism is always the wrong answer to every question, unless the question is “How do we destroy that country?” or “How do we generate an obscene amount of wealth for obscenely horrible people?”

I actually thought America had been making progress in terms of learning the perils of excessive meddling in the internal political affairs of other countries & now I see loads of opinion-makers saying it’s so obvious we need to topple the Cuban government & put in one we like.

Whenever the empire is targeting a socialist government you see public discourse get dragged into a debate about socialism versus capitalism. Capitalism proponents cite the economic hardships and ensuing protests in the country as evidence that socialism doesn’t work, ignoring both the crushing economic sanctions and the obvious fact that per their own logic protests and economic hardship in capitalist nations means capitalism doesn’t work. Socialists fight back against this, and it becomes a big loud back-and-forth which drowns out the much stronger and completely indisputable point that US interventionism is literally always disastrous and literally never helpful.

It’s seriously the worst possible tool you could possibly use for any job; people only think you can solve problems by sending in the marines because they’ve watched too many movies glorifying the US military and depicting problems being solved by Good Guys With Guns. A casual glance at America’s history of interventionism immediately makes it clear that you’d have to be a pants-on-head fucking moron to believe it can help the Cuban people or anyone else.

It’s like trying to solve a math problem with a blowtorch.

If Every Debate About US Interventionism Was About Godzilla Instead

"Person A: Well we can’t just do nothing!
Person B: Dude, doing nothing would be infinitely better than sending in Godzilla to do the thing he literally always does."https://t.co/kEl6AJY8IG

In every debate about whether or not to send in the US military to a foreign nation, you could just as easily substitute Godzilla and have the pro-intervention side look just as rational:

Person A: Look at all that poverty and unrest!

Person B: I know, it’s terrible.

Person A: You know what we should do?

Person A: We should send in Godzilla!

Person B: No, he always makes things worse! You know that! Every time we send in Godzilla to try and solve problems in the world, he just ends up trampling all over the city, knocking down buildings and killing thousands of people with his atomic heat beam.

Person A: Maybe this time would be different though!

Person B: Why in God’s name would this time be different?? You said it would be different in Iraq, in Libya, in Syria. What happened there?

Person A: He trampled all over the cities, knocked down the buildings and killed people with his atomic heat beam.

Person B: Exactly! So what makes you think sending in Godzilla would be any different this time?

Person A: Well we can’t just do nothing!

Person B: Dude, doing nothing would be infinitely better than sending in Godzilla to do the thing he literally always does.

Person A: Hey, inaction has consequences too you know! You probably don’t even talk to Cubans. My brother’s co-worker’s dentist is Cuban, and he says a Godzilla rampage is just what they need. You should listen to Cubans.

Person B: No matter how many Cubans I talk to, it will still be an indisputable fact that Godzilla rampages are always disastrous and always make things worse.

From a decades-long US occupation to foreign-backed coups, Haiti’s history is riddled with disastrous imperial interventions that have helped keep the country mired in poverty. There's zero justification for more American interference in the country. https://t.co/VX77ATX4Jk

And it’s not just Cuba; there’s a push for interventionism in Haiti as well in the wake of President Jovenel Moïse’s assassination. The Washington Post editorial board has called for “swift and muscular intervention” from the US and United Nations, despite swift and muscular intervention being precisely the cause of Haiti’s problems. This would be less egregious than a full-on invasion since it’s Haiti’s de facto prime minister Claude Joseph asking for intervention, but there’s substantial opposition to outside interference from Haitians who don’t even recognize the authority of Joseph to extend such an invitation.

In an even remotely sane world, people promoting US interventionism would be regarded the same as people who endorse genocide or oppose age of consent laws. It is only because we live our lives saturated in mass media propaganda that the madness of promoting something so consistently destructive and horrific is tolerated in polite society.

US military interventionism is never, ever, ever the solution. You’re never going to make things better using something that always makes things worse. Virtually anything else would be preferable.

It’s amazing this even needs to be said.

The Assassination of Jovenel Moise: What Next for Haiti?

The Disinformation Tsunami on Cuba—Analysis by Fiorella Isabel (The Convo Couch), Caleb Maupin, The Grayzone team, and other leading voices of the left