September 17, 2021
Our articles depend on you for their effectiveness. Share with kin, coworkers and friends. 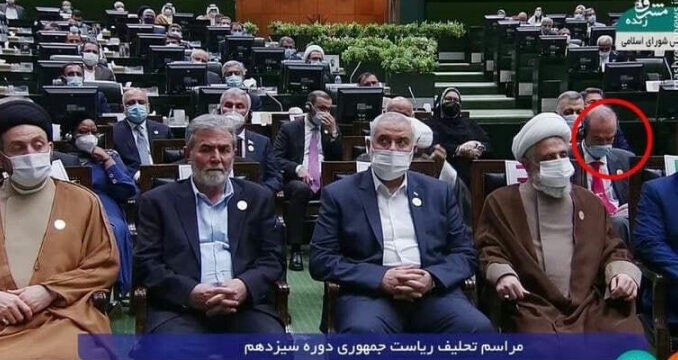 Note the second-row delegates, including the Euro vassals. (Red circle)

Qassem said that the new Iranian president provided ‘head of state’ treatment to the leaders of the Resistance Axis attending the swearing-in ceremony, and that this treatment was meant as a message to the world about the special position that the Axis enjoys in the eyes of Iran and particularly under Raisi’s government.

Your eminence, what about your visit to Iran and the swearing-in ceremony? 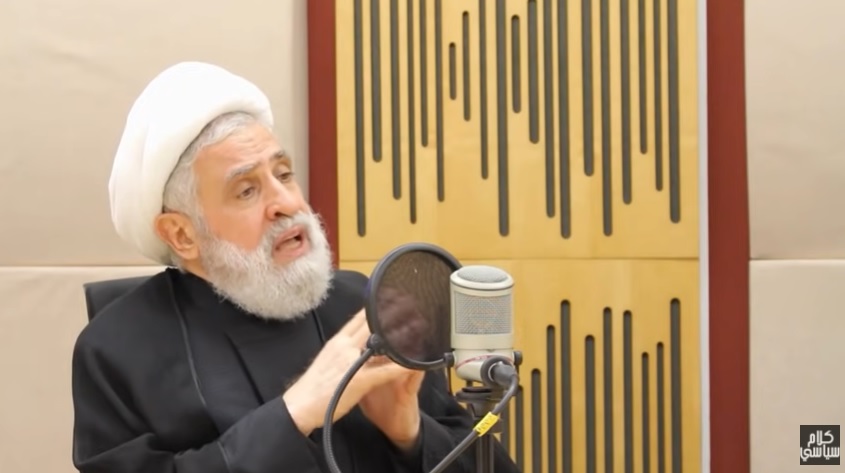 The Iran visit was a very successful one. The ceremony in which Sayyed Raisi took the oath to become the President was very special this year in terms of the seating arrangements. I mean in relation to the first-row seats during the ceremony.

It is the first time to occur in Iran, that sitting in the first row (of the attendees), along with the presidents (of world states) – and there were two presidents seated, the president of Iraq and the president of Afghanistan – the former and current presidents of the (Islamic) Republic of Iran; the head of the Guardian Council; the Chief Justice of Iran; the main Islamic Revolutionary Guards commanders and the main commanders of the security forces. In that same row sat the leaderships of the Resistance (Axis) i.e. that of Hezbollah, Hamas, Islamic Jihad, the Hashd al-Shaabi (PMU) etc.

In contrast, all other delegations were sitting in the second and third rows, among which was the European Union’s representative, in addition to parliament speakers, foreign ministers, and vice presidents. The Iranians wanted to tell the world: ‘we treat the Resistance (Axis) as we (treat world) states, ‘that the Resistance (Axis) has (a special) position (in our) eyes, and it has our support’.

Those are new rules in international relations and geography. Iran wants to cement new rules?!

They wanted this, and the images (from the swearing-in ceremony that you saw) support this. And after the ceremony, upon a request by his eminence President (Ibrahim) Raisi, he requested to sit separately with every (single) leader from the Resistance (Axis) for 30-minute private meetings to discuss (matters of priority). And this happened indeed. My meeting (with President Raisi) was not something I asked for, it was following a request that followed a protocol that is usually enacted with heads of states.

Host: What did you hear from President Raisi?

Sayyed Raisi said: ‘rest assured that we support the Resistance (i.e. Hezbollah) with all our capabilities. We consider you an exceptional model in Lebanon and the region and this is an inspiring model for the world in confronting hegemony and occupation and achieving independence. Rest assured that Iran will always be by your side with all its capabilities”.

He has also sent greetings to his eminence Sayyed (Hassan Nasrallah) and the Resistance men (i.e Hezbollah fighters). He also considered the Hezbollah experience a rich one from which all movements in the world must benefit.

Host: (Yet) this is the traditional Iranian stance …

Sheikh Qassem: And he affirmed it…

Host: Just like all other Iranian presidents? Or is there something different on the part of Sayyed Raisi?

No all of them (had this stance)…but what is different about Iran today is that the makeup of the Iranian state has a high level of oneness/harmony. Starting from the parliament – whose majority is from the ‘principlists’ as they refer to them – to the Parliament Speaker, the Chief Justice, and now President Raisi, who is very close to his eminence the leader Imam (Sayyed Ali) Khamenei, may Allah protect and bless him. The makeup of the Iranian state today, with its various apparatuses, including the Islamic Revolutionary Guards (IRGC), reveals a great level of oneness.

Host: Hawks, it is a government of hawks today.

I do not call it a government of hawks, but a government of Islamic authenticity (and genuineness). (This government & the overall makeup of the state) is before a (particular) challenge and an experiment. It wishes to prove its capability (potential) before such challenges, and it is likely that it will depend more on its internal capabilities rather than on (potential) results (that may arise) from a nuclear deal.

The Great Reset: How a ‘Managerial Revolution’ Was Plotted 80 Years Ago by a Trotskyist-turned-CIA Neocon