The establishment's biggest demagog and political traitor is trotted out to help sell even tighter censorship.

April 27, 2022 8 minutes read
Be sure to circulate this article among friends, workmates and kin. 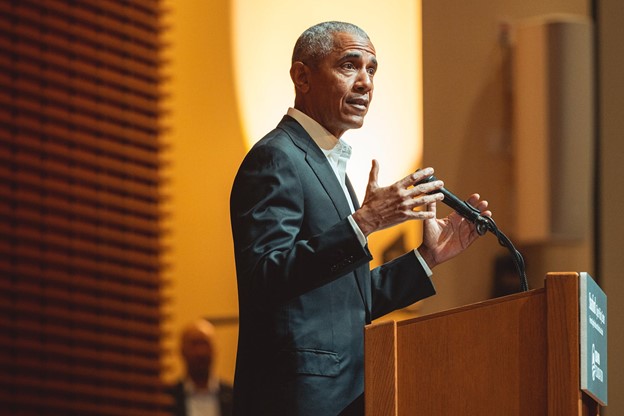 Barack Obama and his ruling class bosses are losing legitimacy with more and more people. They have decided that censoring information will resolve their problems...Just know that whatever Obama and the EU want is not good for the public. Their goal is to silence those who oppose them, and long-winded speeches shouldn’t fool anyone into thinking otherwise.

On April 21, 2022 former President Barack Obama gave a speech at Stanford University on the subject of social media. In typical Obamaesque fashion, he didn’t state his point plainly. He used a lot of time, more than an hour, to advocate for social media censorship. He only used that word once, in order to deny that it was in fact what he meant, but the weasel words and obfuscation couldn’t hide what Obama was talking about.

In 2016 when Hillary Clinton lost to Donald Trump, the candidate she thought easiest to beat, Obama first presented his lament about “disinformation” and “fake news.” His real concern was that Trump’s victory proved that millions of people paid no attention to or even scorned, corporate media. No major newspaper endorsed Donald Trump, the television networks enjoyed the ratings increases he created, but ultimately believed that a second Clinton presidency was in the offing. None of them knew that some 60 million people would go to polling places and give their votes to Trump. Hence the disquiet in November 2016, when Obama realized that having buy-in from establishment corporate media meant little if their narratives were rejected by people across the country.

Now Obama has to live with his handiwork in Ukraine. He and Joe Biden began the crisis when they partnered with right wing forces there in 2014 and overthrew the elected president. They are struggling to prop up the Ukrainians with billions of dollars while also trying to keep the American people from asking why they don’t have child tax credits, minimum wage increases, or student loan debt relief. [Or universal health care).

Obama’s answer is to cut off debate. It took him a long time to say he wants big tech to censor their social media platforms. Instead, he trotted out the usual tropes of authoritarian strongmen, China, Russia, and Trump, as threats to democracy. Of course, the lack of democracy in this country has nothing to do with any one individual or foreign government but they are useful targets and everyone is fair game. Lest anyone forget, Trump’s Twitter account was removed while he was still in the White House.

The only way out for discredited liberalism is to shut down anyone who might utter inconvenient truths. They have been doing just that for quite some time, and while their targets are ostensibly right wingers such as Trump supporters who claim he didn’t lose, it is radical Black and other leftists who bear the brunt of the attack. RT and Sputnik are branded “Russia state-affiliated,” and they have been disappeared from many platforms. Programs such as By Any Means Necessary, which present a Black left point of view, are disappeared along with them.

Obama’s angst is proof that getting rid of RT and Sputnik won’t be enough for him and the ruling class he still works for. Biden is in trouble, with low approval ratings, and the non-stop effort to give legitimacy to U.S. actions in Ukraine are proof that Obama has cause for concern.

While Facebook and Twitter are already arms of the state, and restrict access to anyone who strays from their narratives, Obama would like them to do more harm. “But while content moderation can limit the distribution of clearly dangerous content, it doesn’t go far enough.” The algorithms and opaque rules that kick accounts off of Twitter and Facebook won’t do when wholesale censorship is being proposed. Obama openly talks about government regulation of big tech. “... these big platforms need to be subject to some level of public oversight and regulation.”

Of course, they should be regulated, but as public utilities which guarantee access to everyone. But that isn’t what Obama wants. So he uses Vladimir Putin as the all-purpose villain, or China, which he excoriates for conducting the kind of censorship he now proposes.

Of course, he still has friends in high places, as the European Union (EU) adopted a law, the Digital Services Act , which requires “illegal” content to be removed from online platforms. “Hate speech” is banned, as is “terrorist content.” But how are those criteria defined? It is particularly troubling that an article was added regarding Ukraine: “In the context of the Russian aggression in Ukraine and the particular impact on the manipulation of online information, a new article has been added to the text introducing a crisis response mechanism."

The EU already banned RT and Sputnik. They cannot be accessed in any member nation. The war in Ukraine is definitely a crisis for nations that are lying to millions of people about why it is taking place and about the fact that it could end if the instigators wanted that to happen. They have to lie because they can’t punish Russia with sanctions without harming people all over the world. No wonder censorship is in such high demand.

The EU already banned RT and Sputnik. They cannot be accessed in any member nation. The war in Ukraine is definitely a crisis for nations that are lying to millions of people about why it is taking place and about the fact that it could end if the instigators wanted that to happen. They have to lie because they can’t punish Russia with sanctions without harming people all over the world. No wonder censorship is in such high demand.

Obama and the European Union and whomever else wants to limit our ability to speak and communicate freely will use every ruse that they can to get approval for undermining the free speech they allegedly respect so much. They will conjure up images of the January 6th mob at the capitol, or Putin, or Trump, or Putin and Trump together to get the public to agree to censor themselves. They’ll talk about freedom of speech while doing away with our ability to exercise it in public forums. These are very dangerous times, and former presidents and their partners in crime crawl out of the woodwork with evil intent, all the while claiming to work for our good.

Just know that whatever Obama and the EU want is not good for the public. Their goal is to silence those who oppose them, and long-winded speeches shouldn’t fool anyone into thinking otherwise.

Margaret Kimberley is the author of
Prejudential: Black America and the Presidents  . Her work can also be found at patreon.com/margaretkimberley   and on Twitter @freedomrideblog   . Ms. Kimberley can be reached via email at Margaret.Kimberley(at)BlackAgendaReport.com.

A More Effective Russian Strategy Against Further Enlargement of NATO