October 6, 2022 14 minutes read
Please make sure these dispatches reach as many readers as possible. Share with kin, friends and workmates and ask them to do likewise.

Here is a frame from a video (1) that YouTube removed (at Ukraine’s request) in which a member of the U.S.-installed Ukrainian Parliament answers, at 12:46, a reporter’s question, by blurting out “Heil Hitler”:

Here’s the opening of a Daily Mail article:

• During the week-long course, they teach so-called 'Azovets' how to fire weapons and survive in a conflict zone

• Camp comes under command of Andriy Biletsky, who once admitted that the battalion 'do not like ceasefire at all'

• Conflict broke out in April 2014, when separatists rebelled against rule of Kiev's new Western-looking government

By STEPH COCKROFT FOR MAILONLINE

The U.S. CIA armed (and still does) the Azov Battalion (now called the Azov Regiment).

Biletsky has been explicit about his ideology: “Social Nationalism is based on a number of fundamental principles that clearly distinguish it from other right-wing movements. This triad is: socialism, racism, imperialism.” He defines: “I. Socialism. We fight to create a harmonious national community.” And: “II. Racism. All our nationalism is nothing — just a castle in the sand — without reliance on the foundation of blood Races.” And: “III. Imperialism. … The task of the present generation is to create a Third Empire [a Ukrainian Third Reich] — Great Ukraine.” He teaches this not only to his troops but to Ukraine's children. A French TV documentary, “Ukraine — Masks of the Revolution”, interviewed him. Ukraine objected to the documentary, so it was removed from YouTube.

The people who control the U.S. Government, which installed and controls today’s Ukrainian Government, are no longer unified about the racist-fascists, or “nazis,” that their agents who run America’s Government have emplaced in control over Ukraine’s Government.

Political partisanship in America has finally reached the point where it might endanger the previous foreign-policy unanimity of America’s billionaires, who essentially own both Parties and their respective news-media to choose and “get out the vote” for their respective nominees on election days. No issues have been even nearly as bipartisan between their two Parties as foreign-affairs issues have been — for example, the unanimity typically reaches above 95% on sanctions legislation, to punish Russia, Iran, Syria, Venezuela, and other countries that they want to “regime-change” (take over) — but, now, their previous bipartisanship on these issues is beginning to break down. The news media of the Democratic Party  (2) still predominantly portray the Azov Battalion and other nazi Ukrainian organizations as being freedom fighters, champions of democracy, but the news-media of the Republican Party are even beginning to portray Ukraine’s nazis as being Ukraine’s nazis, and are beginning to handle those nazis as providing them an opportunity to gain politically with American voters against Democratic Party billionaires’ nominees, by exposing those Democratic nominees’ support for Ukraine’s nazis.

On October 5th, the anonymous author of the “Moon of Alabama” website headlined “Media Hide Fascist Ideology Of Ukrainian Militia Which Visit Congress” and summarized, quoted from, and linked to, dozens of recent mainstream U.S. news-stories that now are presenting as heroes the Hitler-modelled Ukrainian White-power-nationalist, rabidly anti-Russian, Azov Battalion. For example, the (Democratic Party’s) New York Times issued, on October 4th, “Released Azov commanders have an emotional reunion with family members in Turkey.” Their London bureau’s Senior Editor Enjoli Liston, who had previously worked at the U.S.-&-UK billionaires’ rabidly anti-Russian newspaper The Guardian, portrayed the Azov Battalion as heroic avatars of freedom. On 27 September 2022, a Republican-Party news-site, News Punch, headlined “Rep. Adam Schiff Greets Ukraine Neo-Nazis in US Capitol: ‘They Are So Brave’,” and reported that the Democratic Party’s leader in the House hearings against the Republican Trump in Russiagate, Adam Schiff, was now welcoming as heroes, leaders of the nazi Azov Battalion. (The Azovs, one with a missing leg and both dressed in black, not insignia-studded uniforms), are seen surrounded by regular Ukraine army females—Ed). 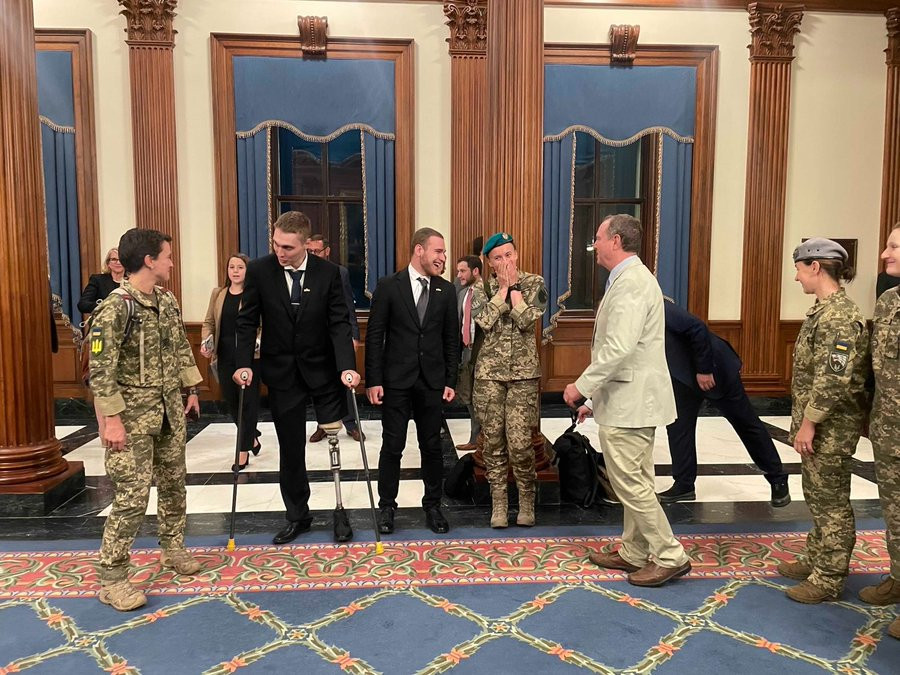 Warmongering scum like Adam Schiff —a rich Jewish politician shamelessly embracing Nazis, like his Ukrainian counterpart oligarch Igor Kolomoyskyi, who actualy funded the Azovs—thrive in a regime awash in hypocrisy and corruption. The Big Lie, enforced by the whore media, protects them.

A viral photo posted on Twitter shows Schiff approaching a couple of nazi Azov soldiers wearing black suits and some Ukrainian military women visiting the Capitol Monday. Posted by Daria Kaleniuk, the assistant director of a Ukrainian activist group called Anti-Corruption Action Centre, the caption of the picture reads, “The most emotional moment was when we suddenly met released Azov soldiers right inside the main hall on the Capitol Hill.”
Kaleniuk was visiting the Capitol with a delegation of female Ukrainian soldiers sent to beg U.S. politicians for additional high-tech weaponry to be provided by America.
One Twitter user commented on the photo of the Azov fighters greeting Schiff, writing, “MAGA Americans were accused of being Nazis and were shot and killed in Capitol Hill. Meanwhile literal Nazis are being emotionally welcomed in Capitol Hill. Makes sense.” Popular conservative commentator Jack Posobiec wrote, “Oh,” in response to this accurate observation.
It’s not clear what the Azov fighters were doing at the Capitol, but the hypocrisy of the image should infuriate all Americans. While average Trump supporters are painted by the media and left-wing politicians as dangerous extremists, actual Nazi fighters sporting swastika tattoos and a multitude of other Nazi symbols are given tours of the Capitol by U.S. politicians.
The strong Nazi presence in Ukraine has been intentionally downplayed by Western media who understand the fact wouldn’t go over well with most citizens. Just last week a Ukrainian battle tank was filmed with a big Swastika spray-painted on its side during a German television interview.
The week prior, an image published by the presidential office of Ukraine showed President Volodymyr Zelensky posing with a Ukrainian soldier in the background wearing a Nazi patch in the same town of Izium where the swastika clip was filmed.
The skull and crossbones patch is the same as a logo used by Hitler’s 3rd SS Panzer Division ‘Totenkopf’ during World War II, only it has been updated to have the skull wearing headphones.
After the image went viral, Zelensky’s office altered the set of photos from his trip to Izium and removed the image of the armed guard wearing the SS-style patch altogether.
The American (fake) left—(actually comprised of center-right corporate imperialists, most in the Democrat party) is openly aligning itself with Nazis while painting its domestic political opposition is Nazis who present a danger to democracy.

Examine the evidence-click on this link
Show less

As recently as 16 December 2021, the United States was one of only two countries, the other being Ukraine, that voted against a General Assembly resolution to condemn “Nazism, neo‑Nazism, and other practices that contribute to fueling contemporary forms of racism, racial discrimination, xenophobia and related intolerance.” Most of America’s other-than-Ukraine ‘allies’ — or vassal-nations — simply abstained, including: UK, Turkey, Switzerland, Sweden, Spain, Slovenia, Slovakia, South Korea, Romania, Norway, New Zealand, Netherlands, Luxembourg, Lithuania, Latvia, Japan, Ireland, Iceland, Hungary, Greece, Germany, Georgia, France, Finland, Estonia, Denmark, Czechia, Cyprus, Croatia, Canada, Bulgaria, Belgium, and a few smaller countries. The “Vote summary” showed: “Yes: 130 | No: 2 | Abstentions: 51 | Non-Voting: 10 | Total voting membership: 193.” Consequently, without any question, the world’s leading pro-nazi country (at least its billionaires who control that country) is: America, and there is no close second (since Ukraine is so obviously controlled by the U.S. regime).

Investigative historian Eric Zuesse’s new book, AMERICA’S EMPIRE OF EVIL: Hitler’s Posthumous Victory, and Why the Social Sciences Need to Change, is about how America took over the world after World War II in order to enslave it to U.S.-and-allied billionaires. Their cartels extract the world’s wealth by control of not only their ‘news’ media but the social ‘sciences’ — duping the public. Media critic and geopolitical analyst Patrice Greanville is this publication's founding editor.

(1) The French documentary Masks of Revolution, mostly banned in US-controlled social media, is easily superior in terms of journalistic value and integrity to anything produced by US networks, but is nonetheless far from impartial. It clearly sides with "the West" in its characterisations of Russia's policies and motives, something that vitiates its impact. It buys, for example, the spurious notion that Russia—supposedly on a whim, or due to inscrutable Slavic perfidy— might actually have plans to invade Europe and France itself, which is nonsensical. It proclaims as fact that Putin prodded the Donbas republics—Donetsk and Lugansk—to be more aggressive toward Kiev, while precisely the opposite was the case.
(2) Moon of Alabama (MoA), as noted by the author, provides an excellent snapshot of the US /Western media's cynical switch in editorial attitude toward Ukraine's Nazis. (Media Hide Fascist Ideology Of Ukrainian Militia Which Visit Congress, Oct 5, 2022). The overview presented by MoA is simply obligatory. In this context, it is noteworthy that the Democrats control today the largest and most powerful bloc of media (in all formats, internet, TV, legacy newspapers, etc.) in the entire West and possibly the world, a power they have been shamelessly brandishing to turn reality upside down in pursuit of imperialist/corporatist and hegemonist goals, while completely betraying the foundational ideals of the real left. The Russiagate hoax was and remains just one example. The manufacturing and reckless pursuit of the Ukraine war—which could easily land the world in a global nuclear war— is another.

As "b" notes, speaking for every decent and well-informed person in the world:

RECOMMENDED BY THE EDITORS