Stephen Cohen’s Misrepresentations about the 2014 Coup in Ukraine

“Wars do not result merely from force of arms, but even more fundamentally, they result from force of lies. In the present matter, those lies can have a world-ending consequence; so, at least the biggest of these lies need to be addressed in public, by historians…” 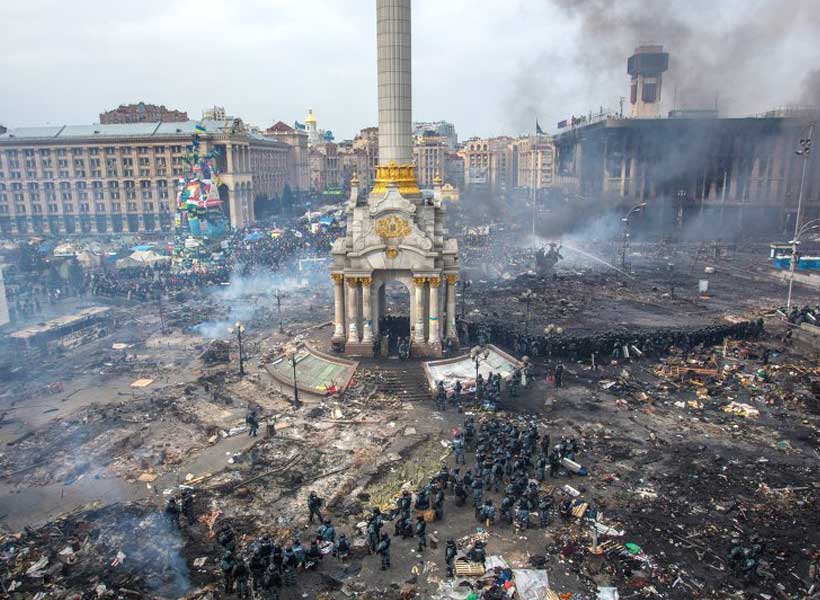 The restoration of the Cold War now, between Russia and the United States, is based on frauds by the United States, as will be documented here; and one of the biggest responsibilities that historians have, is to state this publicly — to acknowledge it publicly and clearly — so that the necessary public pressure can finally come to be brought upon the U.S. Government, to acknowledge that it has been wrong about this matter, which is a matter increasingly threatening the entire planet with World War III, a nuclear war between the U.S. and Russia, the war that would end the world.

Most historians fail this fundamental professional obligation to truthfulness especially about important matters such as this, and don’t even acknowledge publicly that the overthrow in February 2014 of Ukraine’s democratically elected President was a “coup” instead of a ‘revolution’ (which the U.S. Government and its foreign allies call it), but even most of the historians who do call it a “coup” do not say that it was perpetrated by the U.S. Government upon, and greatly harmed, the people of Ukraine; and, so, their admission fails to apply any pressure at all upon the U.S. Government, to stop its constant lying about this.

Wars do not result merely from force of arms, but even more fundamentlly, they result from force of lies. In the present matter, those lies can have a world-ending consequence; so, at least the biggest of these lies need to be addressed in public, by historians. 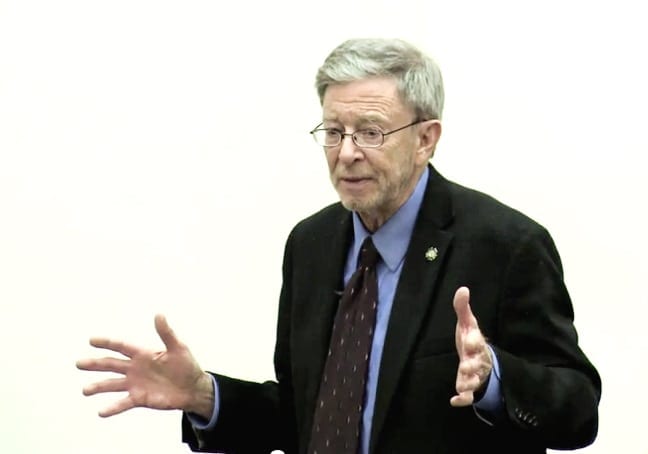 Dr. Stephen C. Cohen (above), the prominent Russia-specialist now retired from Princeton and NYU, has said on at least two occasions, that the February 2014 overthrow of Ukraine’s democratically elected President Viktor Yanukovych was a “coup.” Cohen has never said, like the founder and head of the ‘private CIA’ firm Stratfor, Dr. George Friedman, once admitted, that it was “the most blatant coup in history”, but he did call it some kind of “coup”; and yet he has persistently refused to call it a coup that started in and was perpetrated by the U.S. Government — started in the Obama Administration, long before the coup’s culmination-period, 20-26 February 2014, when the EU finally became shocked on February 26th to discover that it had been a coup. I don’t understand why Dr. Cohen constantly presents it in that false way — as something it wasn’t. The following note is therefore intended specifically to correct Dr. Cohen’s false account that it had started elsewhere than inside the Obama Administration:

On May 9th, at an event co-sponsored by Columbia University’s Harriman Institute and New York University’s Jordan Center for the Advanced Study of Russia, Cohen stated (at 28:45 in the video) that it was “a coup, an unusual coup, it originated in the streets.”

It did not  originate in the streets. It originated in offices, specifically in U.S. Government offices, and assisted by other entities, including private entities, which worked closely with the U.S. Government, in order to plan it, and to carry it out.

You think it originated in the streets, in November 2013 — really, it didn’t originate on 1 March 2013 when the U.S. Embassy started its CIA-run training-sessions for organizing the Maidan demonstrations? It didn’t originate in, or at least by, June 2011, when Eric Schmidt and Jared Cohen visited Julian Assange at the Ecuadorean Embassy in London, in order to deceive him into revealing the tricks he’d use to organize such a mass-movement (the public cover behind which the coup would be perpetrated) — fooled him into thinking that they were on his side, the pro-democracy side — certainly not on the side of coups and other “regime-change” operations? As I pointed out in that just-linked-to article, “Only in retrospect did Assange come to recognize that, as he headlined in October 2014, “Google Is Not What It Seems”. That’s when he noted, “Jared Cohen could be wryly named Google’s ‘director of regime change’.” He recognized too late, that they were manipulating him, using him, to help in overthrowing both Assad and Yanukovych — to help in their and Obama’s fascism.

“Obama’s fascism”? Do you even know what it is?

Ask these people what “Obama’s fascism” is. They experienced it, through his agents — the people he installed to run their country (and Obama never criticized those stooges for doing his dirty-work, not even for doing it in such a blatantly “fascist” way).

Cohen didn’t reply, though perhaps he will, some day. If he will, then I shall welcome his response, because, if I am wrong, then I want to know in what way I am wrong; and if I am right, then not only is Dr. Cohen wrong, but our entire U.S. foreign-policy Establishment is wrong and has been lying pervasively about how the “restored Cold War” happened. Did Putin seize Crimea? Or, instead, did Obama seize Ukraine (via this coup)?

Like I, Professor Cohen — according to his own testimony, and mine — voted for Obama, both in 2008 and in 2012. I would do it again, against Hillary Clinton and John McCain, and against Mitt Romney, because those opponents of his, were even more fascist than Obama turned out to be; but this is the type of electoral choice that remains to the people, in today’s American ‘democracy’. That’s what it is: choices between ‘public’ representatives such as that.

Until the United States Government, and American academics such as Professor Cohen, publicly acknowledge the reality, that Obama lies, and that Trump lies, to allege that Russia ‘seized’ Crimea and that America didn’t seize Ukraine in a prior coup, a coup which has even been publicly admitted by some of the coup’s own actual participants — a coup that shortly thereafter was followed by an ethnic-cleansing campaign to get rid of enough people who had voted for the democratically elected Ukrainian President whom Obama overthrew, an ethnic-cleansing so as to stave off a subsequent electoral victory in Ukraine for restoration of a neutralist Ukrainian Government similar to the Government that was overthrown — as long as they instead hide the fact, that this was an American coup, against Ukraine, in order to grab Ukraine on Russia’s very doorstep, so as to make it a NATO member — there can be no constructive settlement of the ‘new Cold War’, because the fact is: it’s a war that the U.S. has been secretly waging against Russia, ever since at least 24 February 1990.

The termination of this war between the U.S. and Russia cannot be achieved by continuing the lies about what is behind it. This has been a decades-long war to eliminate Russia’s friends and allies, to turn the European ones into NATO members, to surround Russia with our missiles and nukes being positioned just five minutes’ striking-time from Moscow, and then to issue an ultimatum for Russia’s surrender, so as to achieve the world’s first global and all-encompassing Empire.

Continued lies just cannot do the job that the entire world needs to be done: the U.S. (the most dangerous country in the world) must terminate its obsession to expand its empire to an all-encompassing scope, and must cease-and-desist its continuing war against the sovereign nation of Russia, and against all other nations that have continued to resist America’s all-grasping aristocracy’s reach for the ultimate Empire.

If Dr. Cohen has any objections to the factuality of any of the allegations that I have made here, or to any of the documentation that I have linked to as the sources for these allegations, then I publicly welcome him to state what those objections are. Otherwise, I shall continue to take strong exception to Dr. Cohen’s account of these matters.

I have one quibble. To paraphrase Glen Ford, Obama was the most effective fascist. Hillary et al. could never have gotten away with what Obama did. By the way, I did not and would not vote for Obama, as I had read the Chicago Tribune expose on him. It is now nowhere to be found. It has been expunged from the internet.

Please provide here an unusual succession of words (or “phrase”) from it, so that I might be able to deep-search for it on the internet.

Excellent article. It is amazing how many academics have perfected the ability to do such intricate dances “around the truth” if it helps their career path or public credibility with power.

In the 2008 ‘election’,– which is in quotes since in fact to quote George Carlin, “these elections are a charade’–Obama passed himself off as a cool lefty community organizer who belonged to a cool lefty African American church with a cool lefty pastor, Rev. Wright. When one of Rev. Wright’s sermons surfaced, excoriated US policies going way back and continuing in modern times, Obama made Rev. Wright an un-person. So much for historical truth. It should have been obvious that Obama was a sham. Of course Zuesse is correct. In US political culture, even ‘reasonable voices’ like Steve Cohen, just… Read more »

Re S. Cohen: a very high price to pay to remain visible, and not be simply “disappeared” from American consciousness altogether.