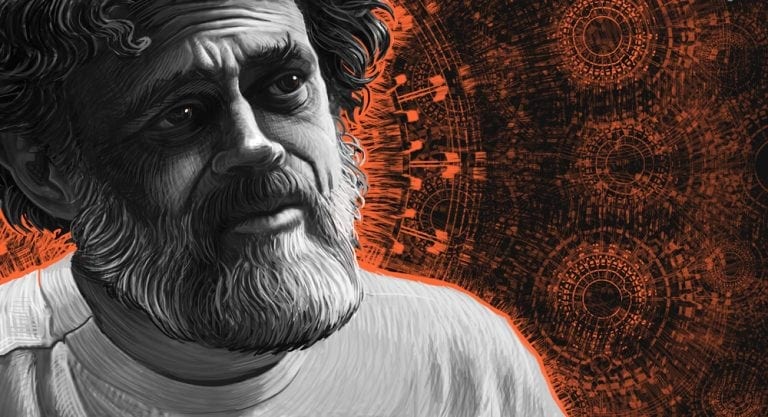 “And what’s really important is, I call it, the felt presence of direct experience, which is a fancy term which just simply means we have to stop consuming our culture. We have to create culture. Don’t watch TV, don’t read magazines, don’t even listen to NPR. Create your own roadshow.

The nexus of space and time where you are now is the most immediate sector of your universe. And if you’re worrying about Michael Jackson or Bill Clinton or somebody else, then you are disempowered. You’re giving it all away to icons. Icons which are maintained by an electronic media so that you want to dress like X or have lips like Y. This is shit-brained, this kind of thinking. That is all cultural diversion. What is real is you, and your friends and your associations, your highs, your orgasms, your hopes, your plans, your fears.

And we are told: No! We’re unimportant, we’re peripheral – get a degree, get a job, get a this, get a that. And then you’re a player. You don’t even want to play in that game. You want to reclaim your mind and get it out of the hands of the cultural engineers who want to turn you into a half-baked moron consuming all this trash that’s being manufactured out of the bones of a dying world.”

[dropcap]F[/dropcap]ormer Green Party Vice Presidential candidate Ajamu Baraka, who is in my opinion one of the only US political figures worth listening to today, recently made the observation, “From Wakanda with its ‘Black identity extremist’ and nice CIA agent to Hoover’s FBI as noble and honest institution, the ‘American’ people are propagandized to their very bones. Critical thinking is disappearing, replaced by fear, mindlessness and the manipulated passions of the herd.”
Culture shapes our minds. The saying “politics is downstream from culture” is deeply understood by the least among us, from sociopathic plutocrats to white supremacists, but the healthy human beings don’t have a good grasp of this. If we are to create a true grassroots revolution to overthrow the ecocidal, omnicidal oppressors who are driving us toward dystopia at best and extinction at worst, we need to transform not just the way people vote and organize, but the way people think.

The movie Black Panther gave a lot of hope and joy to people of color around the world, and has sparked a lot of much-needed dialogue. It also, as Baraka notes, features a heroic white protagonist from the depraved, lying, torturing, propagandizing, drug trafficking, coup-staging, warmongering CIA for no good reason, and a villain who just so happens to embody the “black identity extremism” label which has been invented as a basis for persecuting black activists by the civil rights group-sabotaging, soulless, murderous thugs at the FBI. As an added bonus the movie tells the story of a leader of an isolationist nation slowly discovering the wonders of globalism, announcing at the United Nations in a post-credits sequence that Wakanda was about to become a major player on the world stage.

I don’t know how all that gratuitous pro-establishment messaging found its way into a movie that was supposed to be a cultural triumph for a viciously abused group of people, but to suggest that intelligence agencies had a direct hand in it would not be at all outlandish or unreasonable. The US defense and intelligence agencies have a well-documented history of extensively influencing mainstream Hollywood films, and are surely more involved in them than we already know. At best, the movie was the product of filmmakers who have lived their lives saturated in establishment propaganda.

“We are led by the least among us,” the late Terence McKenna once said. “The least noble, the least intelligent, the least visionary.” 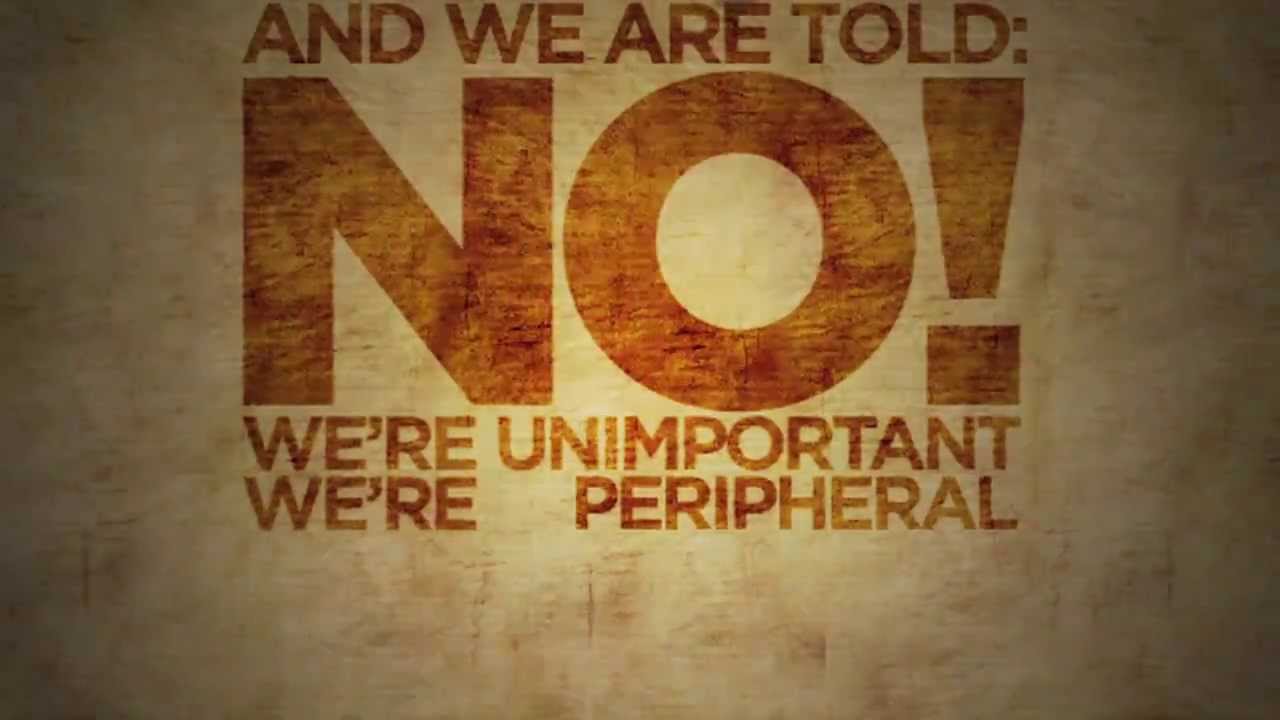 Culture shapes our minds. The saying “politics is downstream from culture” is deeply understood by the least among us, from sociopathic plutocrats to white supremacists, but the healthy human beings don’t have a good grasp of this. If we are to create a true grassroots revolution to overthrow the ecocidal, omnicidal oppressors who are driving us toward dystopia at best and extinction at worst, we need to transform not just the way people vote and organize, but the way people think.

A true bottom-up revolution will necessarily entail a transformation of culture into a direction that has not been authorized by Fox and MSNBC, by Hollywood and How I Met Your Mother reruns, by university professors and Esteemed Experts. It will be a revolution of the ninety-nine percent shrugging off the boxes they were told to stand in and rebuilding culture from their own authority where they stand.

In the old days, rulers relied on religion to shape culture. Obedience and humility are supreme virtues. Blessed are the meek. Blessed are the poor. Render unto Caesar what is Caesar’s. “Heathens” were converted not just into a new religion and loyalty to the Holy Roman Empire, but into a new culture which consumed and annihilated their old tribal cultures and campfire mythologies. This new culture taught them how to think, whom to obey, and where to send their taxes and tithes. Control the culture and you control the power structure.

They used to use religion. Now they use Hollywood.

One of the most pernicious tropes that almost all commercial art pushes is the “deus ex machina” hero-saves-the-day savior trope. From Jesus to Bruce Willis to Superman, we are taught over and over to look for someone to save us. It’s now so obviously insane that we’ve gotten to the point where half of America is hoping the intelligence agencies will save them, and the other half is hoping the reality-tv star president will save them. And the dominators couldn’t possibly be happier.

All art is political. In a society dominated by elites who use art to manipulate the public, art can only ever be political. You either (A) make art directly in service of the ruling class, (B) make art indirectly in service to the ruling class by promulgating dominant orthodoxies, (C) make innocuous mall art which sits there placidly distracting everyone while the world burns, or (D) make revolutionary art, born of inspiration. Engaging regularly in the latter is one of the most revolutionary things that anyone can do.

Start making art. Any kind of art, in any way. Sink below the voices in your mind of your parents, your teachers, your boss, your peers; sink below those voices that will tell you that you’re inadequate and you’re doing it wrong and you’ll never get it right. You can only get it right. You can only express you. Your you-ness is the prism through which the light dances. Just let the light shine through you and draw the shapes that it makes. Or dance them. Or sing them. Or sculpt them out of mashed potato. Every expression that comes through you helps. It all makes a difference.

Tend your spark. Take time to tend it. Become playful in your every day life and look for opportunities to make something. Put one rock on another rock, and then put those rocks on a tree branch, and take photos of the people looking up at them wondering how they got there. Write a little love letter on the wall that you happening to be looking at, to the next person who happens to be looking at it. Gather a posey of flowers and found objects. Put it in a vessel in front of your television so the light makes shapes on the wall. Draw the shapes. Hide them from your mother.

It might not seem like much, but this is how you build a fire, and one day very soon you’ll be writing songs or poetry or making films from the shapes you make through your prism. We need to take back the cultural reins from the sociopaths who would have us all waiting docilely for some kind of deus ex machina to save us.

Shine as bright as you can to draw interest and attention toward the authentic and away from the inauthentic, toward inspired art and away from propaganda. Collapse the machine from its very foundation with a people’s takeover of artificial culture.

LETTER TO AMERICA – AN OPPORTUNITY AND A WARNING. THE CHOICE IS YOURS.

What the movie should have been would have been about Huey Newton, Bobby Seale, along with counterparts like Malcolm X, Fred Hampton, Eldridge Cleaver, with a nod to James Baldwin for that matter. Using a film to divert people into a feel good moment that makes its producers rich is one thing. Making a movie that motivates the start of a social movement that is desperately needed is quite another. There is a reason why Social Realism as an artform was repressed in favor of action fantasy films like Black Panther, Superman, Batman, Spiderman, etc. is to further infantilize the… Read more »